You are here: Home > Blog > Philippines Adventures Part 3: The Loboc Tarsier Conservation Area
By Matt on April 30, 2012 in Blog

During my visit to Loboc I visited a well-known tarsier conservation area that I had looked forward to seeing for years only to later learn that in doing so I had unwittingly contributed to an unethical business. Read on to avoid making the same mistake I did.

After a whirlwind two-day bus, plane, and tricycle journey from Banaue Rice Terraces on Luzon, Jeannie and I arrived at Alona Beach on the island of Bohol where we contemplated our next step. After some deliberation, we decided to split up. Jeannie wanted to spend a few days in a filipino homestead with Flip Flop Tours (she wrote about it here). I had been to Bohol several times before and had heard a lot about the Loboc River and the Tarsier Sanctuary there, but had not yet seen it.

I hopped in a tricycle back to Tagbilaran, which is the capital city of Bohol where the airport and main ferry terminals are located. If you are travelling to Bohol, you will most likely travel through Tagbilaran.

The most common way to get to Loboc is by local bus. The local bus station, however, is about 2km out of the city, so I had to take a tricycle there, which cost about fifty pesos. Loboc is only 24km from Tagbilaran, so it’s a short cheap bus ride. 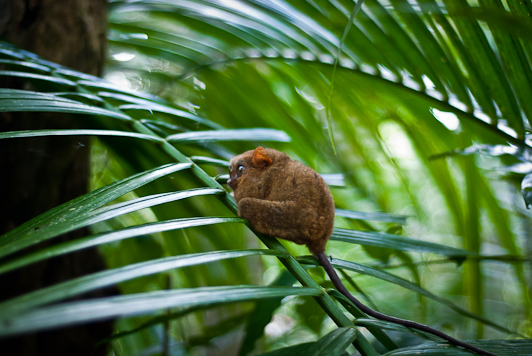 A Philippine tarsier in the conservation area

The Philippine Tarsier has two claims to fame: 1) it’s endangered and 2) it’s cute as a button. For these reasons, visiting the Loboc Tarsier Conservation Area was on top of my list in Loboc. Sadly, in researching this article I discovered that the Loboc Tarsier Conservation is not an official tarsier sanctuary run by the Philippine Tarsier Foundation, but is an unethical for-profit tarsier viewing area that subjects tarsiers to conditions harmful to their health.

The Philippine tarsier (locally referred to as the kupal) is one of the world’s smallest primates. They grow to 8 – 16 cm (3.5 – 6.5 in) and are known for their enormous and strangely cute bug-eyes. They actually have the largest eye-to-body ratio of all mammals–their eyes are 150 times larger than a human’s in relation to their body. They can move their ears to better hear sounds, leap 5m in the air, rotate their heads nearly 360 degrees, and bear an uncanny resemblance to Yoda.

The Philippine tarsier is endemic to the southern Philippines and listed as endangered. for this reason the Philippine Tarsier Foundation, a private organization, works to protect them and runs a research and development centre. When I visited the Loboc Tarsier Conservation Center I assumed it was run by this organization.

In researching this article I learned several disturbing facts about tarsiers that are kept in captivity for public viewing:

1) It is illegal in the Philippines to possess a tarsier except for educational or conservation activities.

3) Philippine tarsiers live alone and only encounter each other occasionally during the night while hunting.

5) Captive tarsiers can live as little as two years and as long as 12 years, which is still much shorter than their natural average lifespan of 24 years.

A captive tourism-based environment is very stressful to tarsiers. They are kept awake all day when they normally sleep, they are subject to camera flashes that hurt their extremely light-sensitive eyes (they can see at night, remember), they are forced to live in close proximity to other tarsiers and humans (which runs counter to their solitary nature), and they are unable to roam as they do in the wild. The result is extremely low reproductive rates and a 50-95% reduction in their lifespan due to stress. Some captive tarsiers even been reported known to ‘commit suicide’ by banging their heads against hard objects. 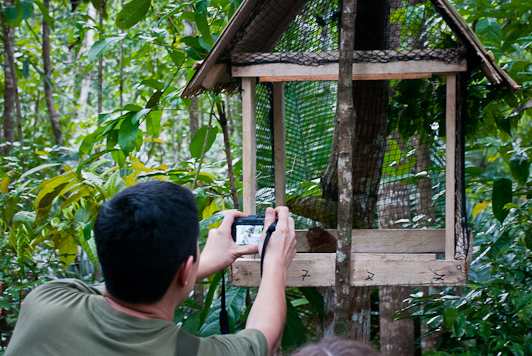 Man photographing a captive tarsier in a cage

That means that captive tarsiers have shorter lives and reproduce less than those in the wild. When captive tarsiers die, they almost always need to be replaced with wild ones, thus contributing their ever-nearing extinction.

The legal status of the Loboc Tarsier Conservation Area is not clear but it does, from what I can tell, seem possible that they have special permission to display tarsiers for tourists. The facility I visited, with a large (perhaps 1-2 acre) open tarsier viewing area, appeared to be much better than its previous incarnation, which was simply a collection of caged tarsiers along the Loboc River.

So, it seems that steps have been taken over the years to improve conditions. Still, knowing the suffering that tarsiers in captivity endure, I cannot recommend visiting this facility.

If you would like to see tarsiers, I strongly urge you to visit the official Tarsier Research and Development Center just 18 km from Tabilaran. Alternatively, this centre is also a short 20 km drive from Loboc. It’s a short distance to travel to know that you are contributing to the survival, rather than the demise, of an entire race of furry little Yodas.

While in Loboc I stayed at Mary Jane’s Native House, a traditional native-style house beside the Loboc river. I have to say that, while basic, the room, which had a sink, toaster oven, fridge, and separate bathroom with a real toilet and hot shower, was more than worth the $12 USD/night they charge for it. The owners are also incredibly kind, which is the real charm of the place.

Matt Gibson is a professional writer and award-winning photographer, a former President of the Professional Travel Bloggers Association, and CEO of UpThink, a digital marketing agency that specializes in content, community building, and influencer marketing.
View all posts by Matt →