You are here: Home > An Excessively Detailed Guide To Kyrgyzstan’s Ak-Suu Traverse Trek

CREATED IN PARTNERSHIP WITH

I’ve done a lot of hiking. Definitely more than most people. I grew up in the Rocky Mountains of British Columbia. I  worked as a tree planter in those same mountains for two years after graduating from University. I later lived in Utah for a couple of years and once climbed the tallest peak in eastern Asia in a single day.Of course, I’m not in the same shape that I was in my twenties, but I’m pretty experienced and, I like to think I’m pretty realistic about my abilities. Despite this, the difficulty of the Ak-Suu Traverse took me by surprise.The elevation combined with the near-constant steep inclines and declines during the trek had me struggling to maintain a moderate pace each day.

I wasn’t the only person having a tough time. My buddy Tim was also pushing himself.

In a situation where you’re operating at near the limit of your physical ability, mental preparation is essential. Nothing will drain your willpower like running into an unexpected challenge or learning your goal is much farther than you expected when you already feel exhausted.To avoid an unpleasant surprises, each night I asked our guide for specific information about the next day’s hike. How far? How much up? How much down?

Our guide, who knew the mountains from experience, but not by measurement, had a hard time answering those questions specifically. And that’s why I’m writing this post.

This post will tell you exactly what to expect on the Ak-Suu Traverse Trek, along with a little storytelling about my experience on what was undoubtedly the most epic trek I’ve ever done.

This post includes 3 parts: planning resources, an overview of the hike, and a day-by-day breakdown of the hike. Here are a few other useful resources you’ll probably want to check out if you’re planning to travel to Kyrgyzstan and go trekking.

15 Things You Must Know Before Visiting Kyrgyzstan on Local Adventurer

Guide To Backpacking Kyrgyzstan on Goats on the Road

Our route was a slightly shorter variation on the standard Ak-Suu Traverse Trek, which would normally start in the village of Jyrgalan and end at the Jeti Oguz Resort and take one day longer than our trip.

Below is a summary of the trek in numbers.

Avg daily distance: 15.5 km (not including the side trip) 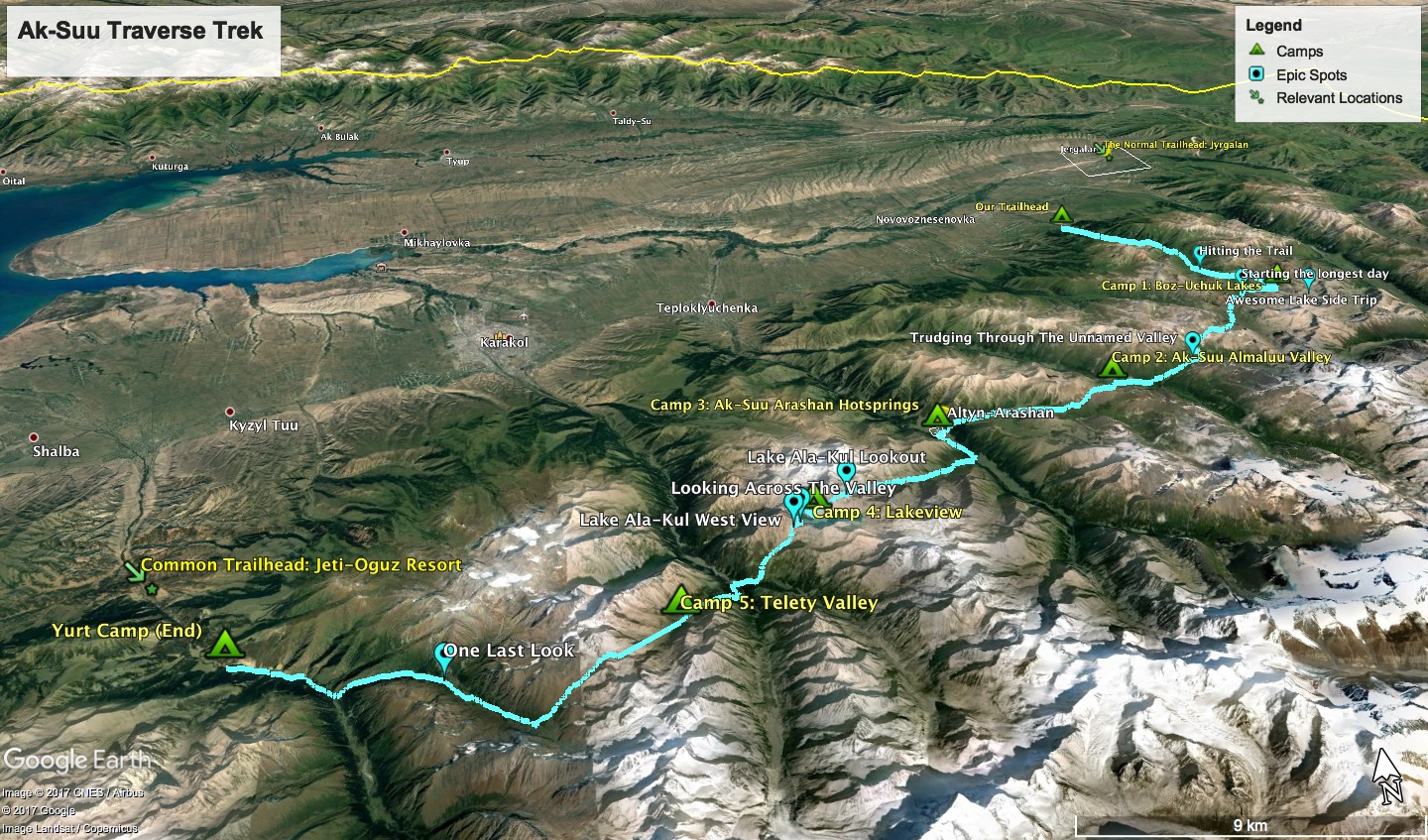 I think the above summary illustrates very well the nature of this hike: it’s a lot of really steep climbs and descents at high elevations broken up by short treks across valley bottoms. This is usually on jagged exposed rock or loose scree. So, make sure you have super-tough boots and are prepared for some knee abuse. 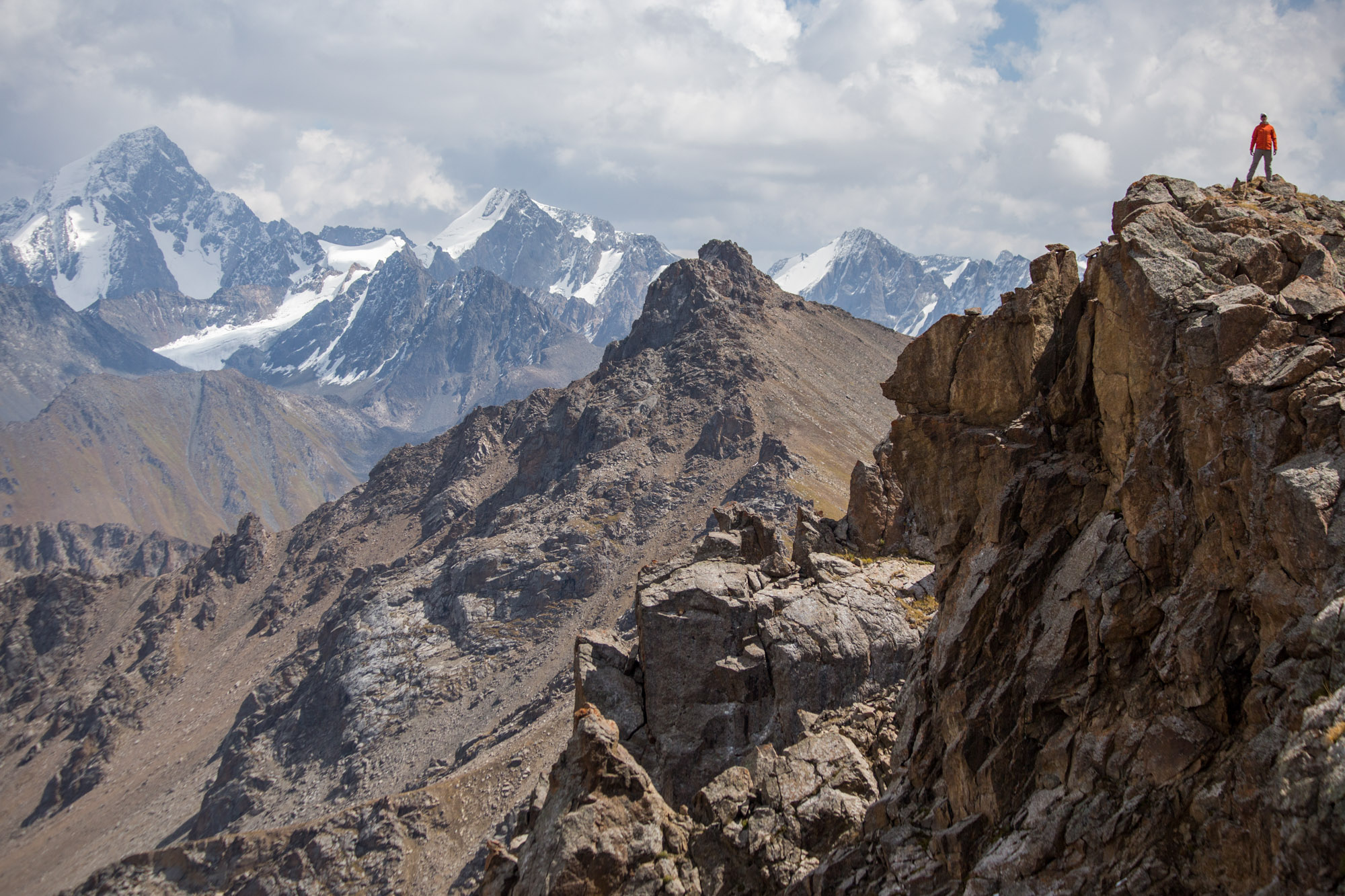 Notes
We hiked up a long slow inclined back road that gradually petered out into a trail. There were a few marshy areas. The hike was overall pretty manageable but got pretty tough toward the end. The last push was a steep rocky climb of a few hundred meters. I probably stopped to rest 4 or 5 times before I got to the top. We camped in front of the lake. 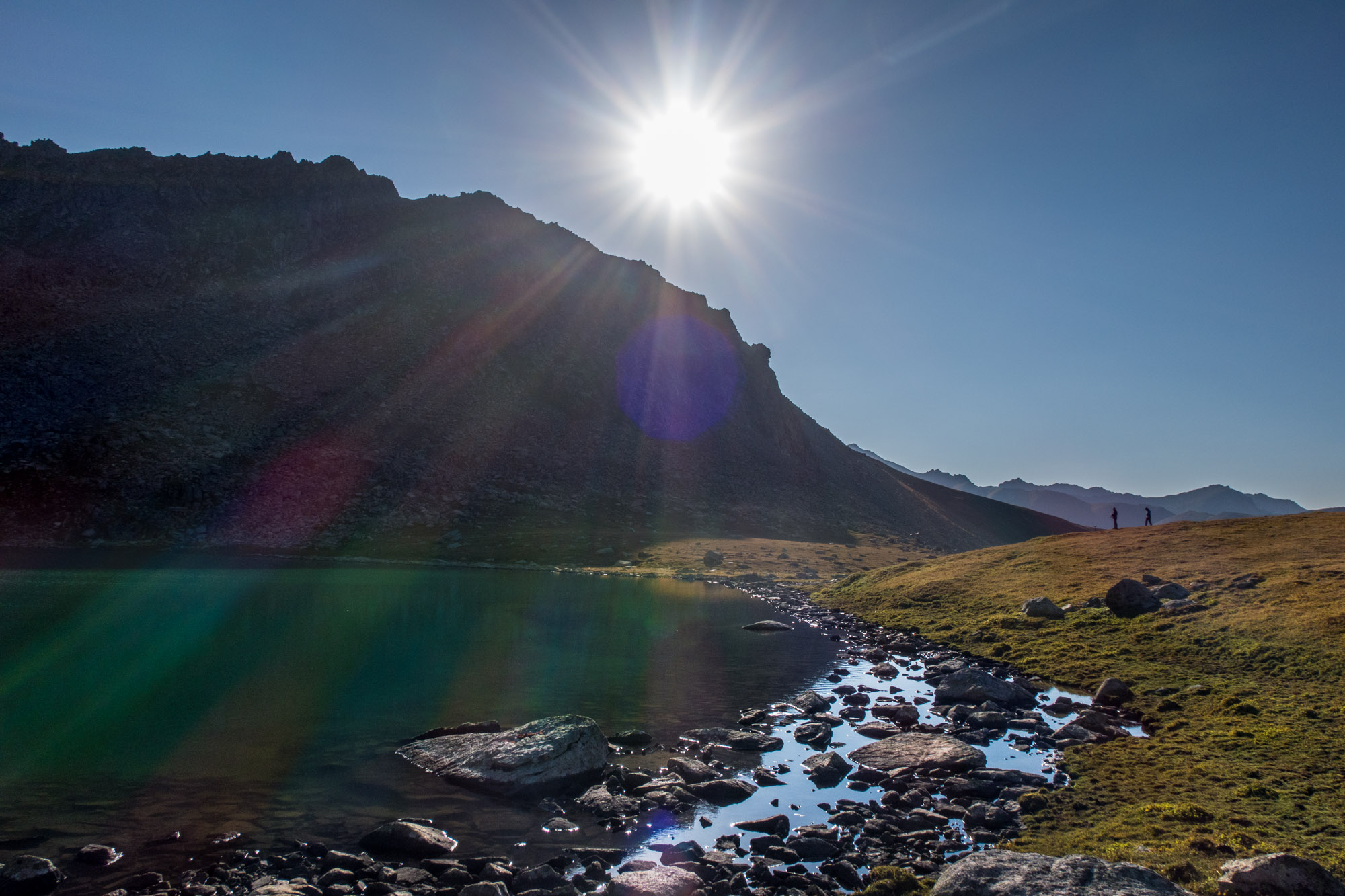 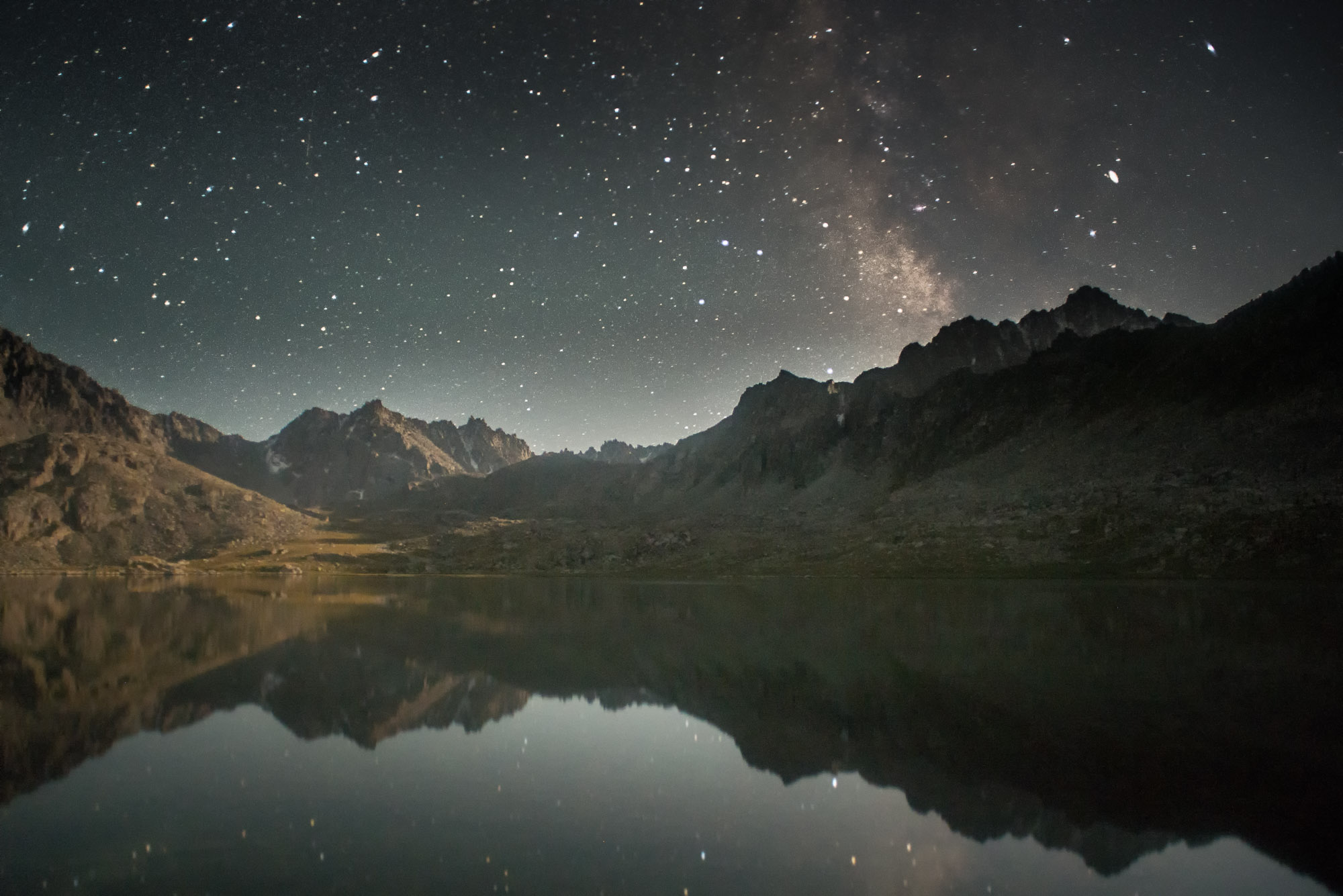 Route Summary
Set off from the Boz-Uchuk Valley crossing a 3524 m pass with view of Tashtanbek Tor Bashi. Then crossed the Jergez Valley climbed Ailanysh Pass, passing two lakes. We descended an unnamed valley, which connected with Ak-Suu Almaluu Valley. We hiked several km down the valley and camped beside the Ak-Suu Almaluu River.

Notes
It was by far the longest and hardest day of the trek crossing two passes. It didn’t help that we started at 5 am to take a side trip to a nearby lake (not included in the route summary or map). At 8:30 am we started hiking north-northwest traversing a long steep rockslide with very large boulders to a pass. The descent into the next valley was extremely steep. After crossing the valley bottom we began ascending the other, equally steep, side and stopped to rest frequently. The top was a rocky gravely saddle between two peaks. It was a stunning view with a massive glacier just beyond the peak to our left.

The first part of the descent into the next valley was more gentle than the previous one. The second half of the hike down into the valley — which was probably about 500 vertical meters across several km — was full of rocks and bushes. We bushwacked diagonally down across the valley side through the rocks and the bushes. Walking sideways across the slope in that train was quite difficult and very hard on the feet.

We crossed a creek at the valley bottom and begin climbing up to the next pass, which was grassy and steep. At the top was a plateau with a lake beneath some peaks with two small glaciers. After the plateau, the climb was steep and rocky. It was 2 to 300 meters of very steep climbing to saddle, which looked out over an epic valley with majestic peaks in the distance.
The descent to the valley floor was mostly steep with some gentler sections, and the walk down the valley to the campsite was several km and took a couple of hours. 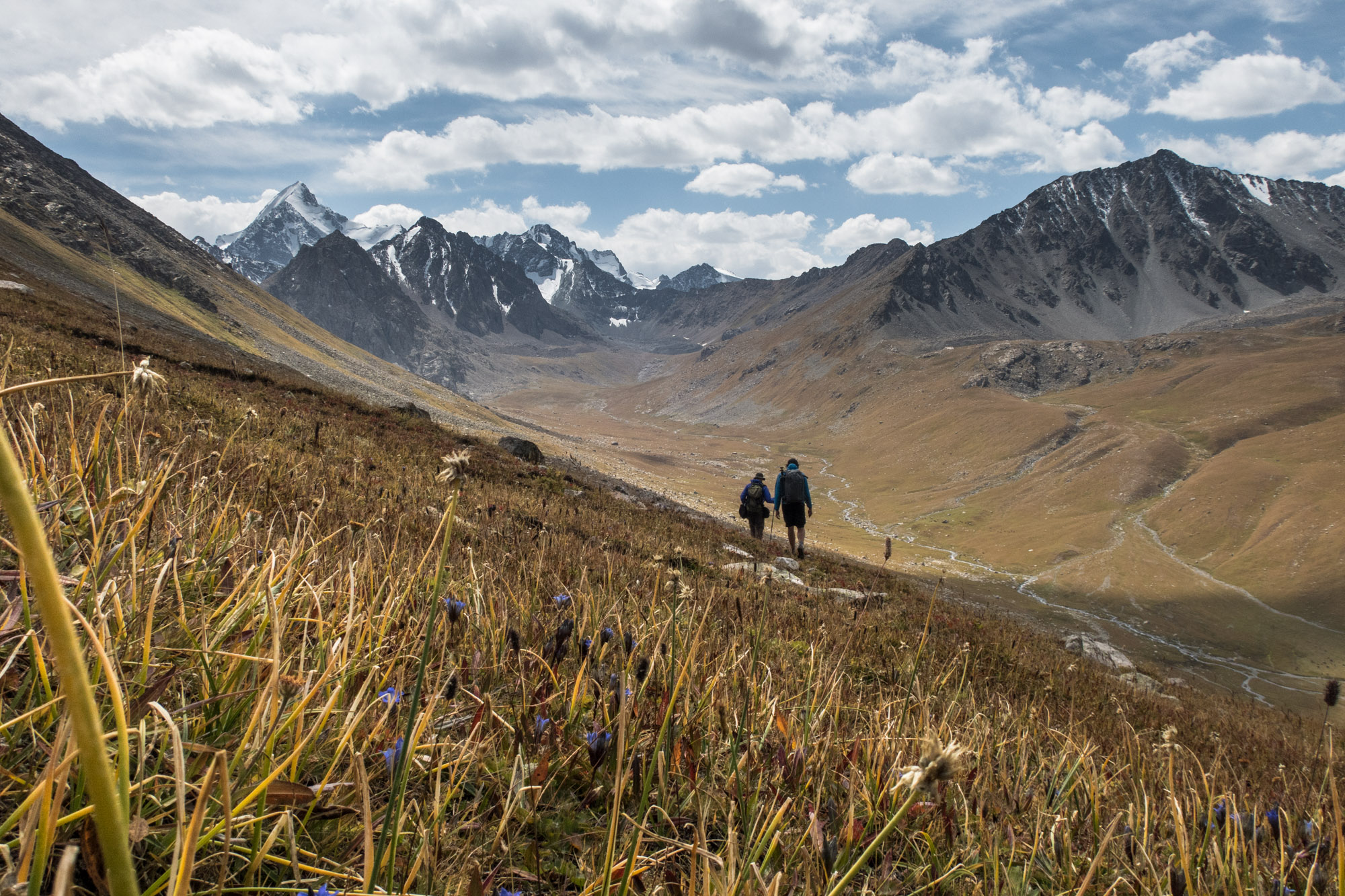 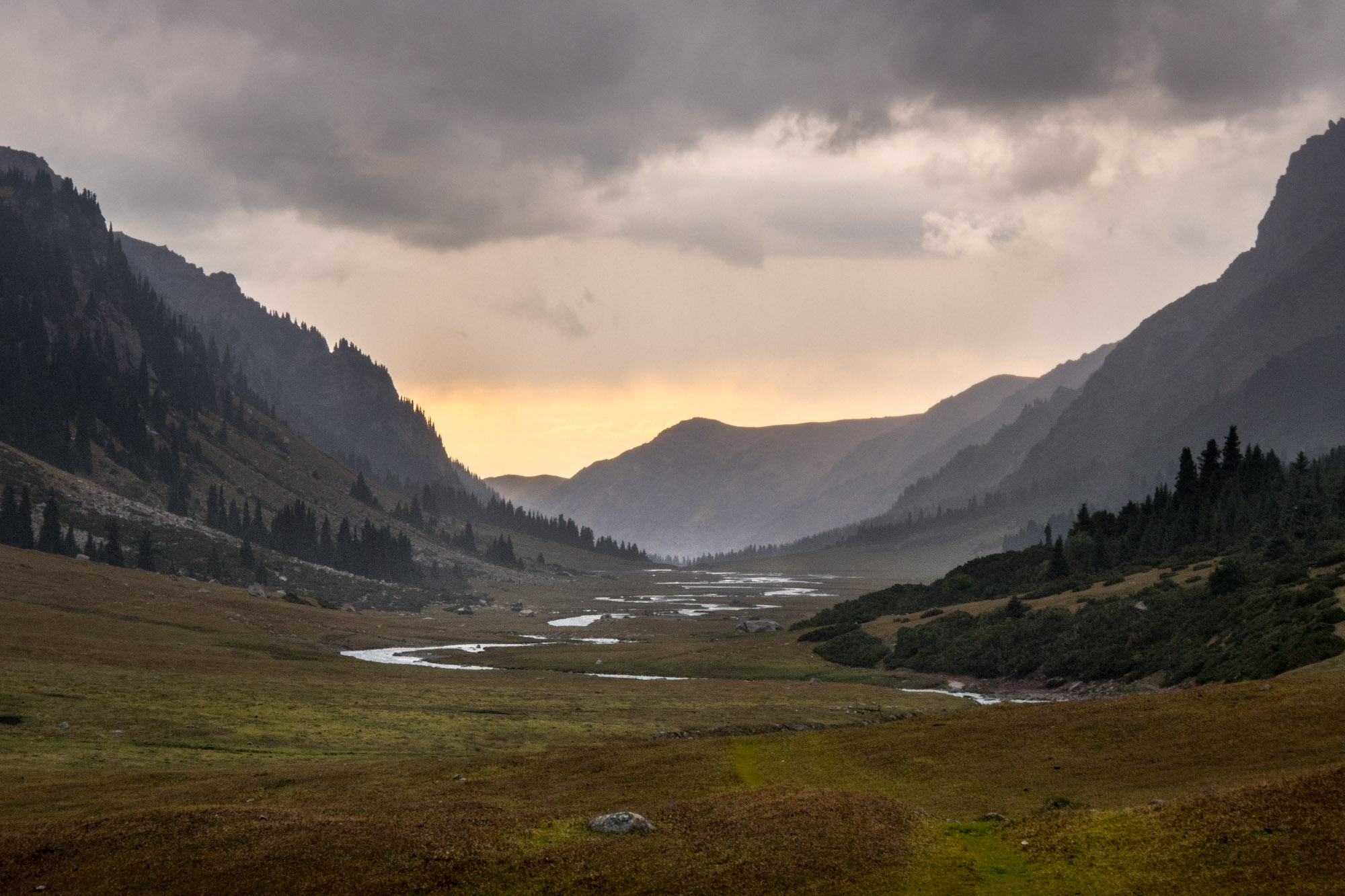 Notes
This was one of the easier days. It started with a very steep climb but it was easier than past days. I was acclimatizing. The top of the pass had the best view so far. There was a very crazy narrow peak off to the left that was perfect for pictures so we took some. We then started a long descent. It was very steep the beginning and my knees were beginning to hurt. We arrived at the guest house around 4 or 5 p.m. for beer, dinner, hot springs, and to charge our devices. Route Summary
Climbed south up the Ak-suu Arashan valley then turning into the much steeper Keldeke Valley and climbing to Ala-kol North Pass at 3906 m. Then traveled SW to Ala-kol Lake where we camped.

Notes
We had to cross a wide fast river before starting up the valley. We climbed about 1000 m of pretty tough trail, which then flattened out. We stopped at a river in view of the pass. We then climbed a bit farther to the base of a very steep slope of scree, which was our last climb to the top of the saddle. There we had a long leisurely lunch. Finally we started the toughest climb of the trip up the steep and very unstable slope, which was about 200 meters high, taking us to 3800 meters.

The view at the top was insane. To the left were several craggy peaks. To the right of them was a massive glacier with a huge foot reaching down toward massive, emerald green Lake Ala-Kol. We descended across the slope on the variably-stable trail, which led to the lakeside campsite. Route Summary
Hiked around the lake and up a steep rocky slope to Panorama Pass at 3781 m before descending an unidentified valley to the Karakol Valley, which we crossed. On the far side we climbed to the Telety Valley to camp very high in the valley (around 3500 m).

Notes
We left camp and started around the lake to before heading up a steep shale climb. We took a break at the summit. We then begin a long steep descent. I began leaving the trail in search of soft shale to run down because I found it much easier on my knees and fun to run down the shale when it was soft enough for my feet to sink in. There was lots of soft shale and it made the descent much easier. We walked several kilometers along the valley bottom and then started up the other side. It was steep, but not crazy steep. It leveled out in a high valley. We walked up almost to the end where we made camp the side of a river under a glacier and towering peaks. It was the coldest night of camp. The sun set early and rose late because of the tall valley walls. Route Summary
Started with a short climb from camp to Telety Pass at 3801 m and then a descent through Telety Valley to Jeti-Öguz Valley which we followed to the yurt camp at Kok-Jaiyk where the trek ended.

Matt’s Notes
The slope was shallow at first and got gradually sleeper. It was higher than we expected it to be. We crested the highest saddle that we could see from camp to find we were still far below the pass. Just beneath the last pitch was a glacier and stream where we filled our water. Then we started up the last steep climb. The pass was around 3800 meters. The descent was steep with lots of shale. Again I looked for places to walk down the soft shale.

We began meeting groups hikers on their way up the trail. The shale trail gave way too steep meadow trail, which we followed to the valley bottom. From there it was an approximately 15 km hike down a pleasant, gradual downhill trail that eventually expanded into a road to the yurt camp where our ride was waiting. The Ak-Suu Traverse is normally a 9-day hike that starts in the village of Jyrgalan. It follows the Eki-chat valley and turns south to camp at foot of Terim Tor Bulak pass. The next day that route reaches the Boz-Uchuk Lakes that we camped beside on our first night.

Have you done the Ak-Suu or a similar trek? How was it?