You are here: Home > Blog > Adventures in Malaysian Borneo Part 1: Driving at Night with No Lights 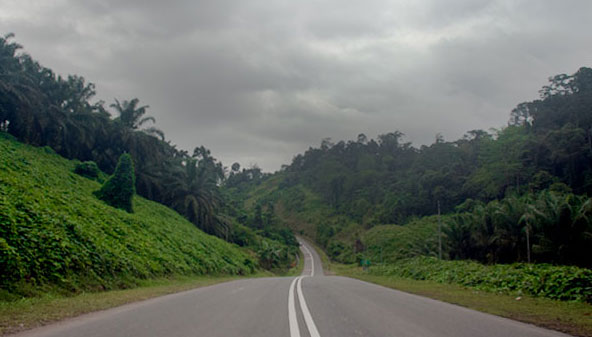 PT1: Driving at Night With No Lights

PT2: Lost in a Monsoon

PT4: A Mountain of Bat Guano

PT5: The Eye of the Elephant

“Don’t drive at night.” The rental agent told me.

It was 4pm. I was in the capital renting a motorcycle that I planned to drive around the perimeter of the state and I was already a day behind schedule. The first thing I planned to do was drive at night. Telling the agent that, however, was not going to get me on the road any faster. So, I listened to his lecture.

“Animals walk on the road at night.” He warned. “And there are a lot of big trucks.

I had been riding motorcycles for nearly seven years in Taiwan where the highways are overcrowded and traffic laws are all but nonexistent. I could handle a bike well, and was pretty good at maneuvering out of tight spots.  I felt that I had good reason to be confident. The agent’s speech was for tourists on vacation who rarely, if ever, rode motorcycles. From the mechanical tone with which he spoke I could tell that he gave the same talk to every renter that came through his shop.

As talented as may I think I am at driving a motorcycle, there is one thing I have long since proven that I truly excel at: ignoring the sensible advice of people who know more than I do.  It’s a bittersweet gift. More often than not it lands me in ridiculous and uncomfortable situations. But every now and again it results in a brilliantly rewarding experience—something that that would not have happened if I’d worried about all the things that could have gone wrong.

This was not going to be one of those times.

An hour later I was weaving between cars on the highway out of Kota Kinabalu. I was going to Kundasang, a village situated at the highest point on the highway that crosses Mount Kinabalu, the tallest mountain in Southeast Asia. Kundasang was only 100km away, but the trip would take me about six hours partly because, as I quickly learned, Malaysians don’t care much for road signs, and also because I would have to climb around 1800m over the last 60km. That is to say, the last 60km of road would have an average 33.3% grade.

Around dusk, after missing a few unmarked turnoffs and backtracking, I arrived at the base of Mount Kinabalu. I had passed the last town before Kundasang forty-five minutes earlier. From here to Kundasang the mountainside would be too steep for any settlements.

The road consisted mainly of switchbacks, which is to say it would ascend several hundred meters in one direction across the face of the mountain before turning nearly 180 degrees, and then climbing in the opposite direction. Zigzagging this way is the only way most vehicles can climb such a steep surface.  However, this makes driving very slow because drivers have to slow to a crawl to round the sharp curves and then try to accelerate uphill on the short straightaway, only to slow down again for the next curve.

It didn’t help that the road was still wet from rain earlier in the day.

Darkness crept across the mountain. The trees along the side of the road became muddy blobs, and the lines on the road grew faint, so I switched on my headlight. It was then that I realized the real reason the agent had warned me not to drive at night: the headlight on my bike was about as bright as a five-dollar flashlight.

I watched the road closely as I fiddled with the light switches. High beams. Low beams. Lights on. Lights off. I tried over and over, but no matter what I tried, the headlight did nothing to illuminate the road. Needless to say, I was less than pleased by this turn of events, but I was not concerned. It was manageable.  I just had to drive slowly, and navigate carefully by the faint white line on the shoulder of the road.

Cars zoomed past me as I crawled up the mountain. At first I tried to follow them, watching their red taillights, but I couldn’t keep up.

“It could be worse.” I thought. “It’ll take a while, but I’ll get there eventually.”

Then I drove into a cloud.

In the grey haze I almost couldn’t see the ground at all. Sometimes I could vaguely make out the white line on the shoulder of the road, but not consistently enough to be sure that at any time I wasn’t about to drive into the ditch, or worse, the oncoming lane. I slowed to nearly a walking pace.

“Nrrrooom.” A car sped by me so closely I could feel the wind off of it on my bare arm. I began to shiver. At sea level the weather had been hot. I had started my journey wearing flip-flops, shorts, and a sleeveless shirt.  As night fell and I rose in elevation the temperature dropped dramatically. I was freezing in the dense wet air, but there was nowhere I could safely stop to take clothes out of my bag. The shoulder of the road was just one or two feet at its widest.

Then, I began to worry. At the pace I was driving crashing into the ditch would not cause much damage. But what if a car came up behind me in the fog and didn’t see me until it was too late? The last one had been very close.

There was no other option open to me, so I continued. After a while I finally drove out of the cloud. Encouraged, I sped up. “Alright!” I thought. “Here we go!”

Then I drove into another cloud.

I tried to calculate how far I had already travelled, and how far I was from Kundasang. Then I calculated how long it would take to cover the distance at the speed I was driving. It would take at least several hours.

I mentally summed up my situation. I was alone in a strange country, freezing cold, riding a motorcycle up the side of the tallest mountain for thousands of miles, at night, in the fog, with no headlights, and there was no end in sight. A lump of discouragement turned over in my stomach.

I’m not sure how long I drove like that. One tends to lose track of time when one is berating oneself for one’s own stupidity.  Eventually, though, salvation arrived.

Salvation comes in many forms. Mine came in the form of an 18-wheeler carrying a cement ball the size of a small house. I heard it growling up the mountain behind me, gears grinding as the driver tried to maintain what little momentum he had. The truck crawled past me, allowing me to see close up the enormous concrete sphere strapped to the bed. It was at least four meters high, perfectly round, and smooth.

After the truck passed me its numerous taillights illuminated the road.  I could drive again! Under the weight of its load the truck was driving only slightly faster than I had been, but at least now I could see the road and didn’t have to worry about getting hit by a car.

I have a second personality trait (in addition to my inability to take advice) that often lands me in ridiculous situations. I am mentally incapable of just leaving well enough alone.

After following the truck for twenty or thirty minutes I became impatient. The truck was too slow. Now that I could see, I wanted to go faster. Cars were passing us every few minutes.  I knew that I couldn’t keep up with a car, but I wanted to get out from behind the truck.

Then a bus came roaring past.  Perfect. “I should be able to keep up with a bus,” I reasoned.

The bus driver was a maniac, careening around the hairpin corners at speeds that I couldn’t match without risking sliding off the wet road. So, after a short vain effort to keep up with the bus, its taillights dissolved into the fog and I was once again alone in the thick grey.

So, once again I slowed to a walking pace and, eventually, the 18-wheeler caught up to and passed me. This time I stayed behind it until we finally rose above the clouds onto a mountain ridge beneath a glorious bowl of stars the that looked to me to be the size of Christmas lights and a moon the size of an orange. Without the clouds the sky provided more than enough light for me to see, so I zipped past the enormous truck and its enormous cement ball and sped off into the night.

A short while later I arrived in Kundasang and stopped at the first hotel I saw. Shivering and exhausted I checked into a room, took a long hot shower, and climbed into bed. “Well.” I thought. “At least the drive can’t get any worse. The worst must be behind me for sure.”

I need to learn not to think things like that, because the next day things got worse—much worse.

Continue to follow my trip in Adventures in Malaysian Borneo Part 2: Lost in a Monsoon

Every week we hand-pick the best deals from around the web and deliver you up to 80% off your favorite brands like Patagonia, North Face, and Arc'teryx
Tweet
Pin9
Share
9 Shares

44 thoughts on “Adventures in Malaysian Borneo Part 1: Driving at Night with No Lights”