Are Calgary and Kananaskis about to become a river surfing mecca?

You are here: Home > Blog > Are Calgary and Kananaskis about to become a river surfing mecca?

“Your wetsuit has some holes in it.” Jacob Kelly told me. “So it’s going to be a little colder for you.”

It was May and we were standing on the banks of the Kananaskis River in the mountains between Calgary and Banff, Canada. The day before it had been snowing. I had finished photographing the surfers for Tourism Calgary and was about to try river surfing in the barely-above-freezing water.

That was not what I wanted to hear.

By the end of my hour-long surf session on the river wave the call The Mountain I was so fatigued that after falling and being swept downstream yet again I didn’t even bother to try and paddle upstream. I just got out of the river and started wobbily walking up the river bank.

I was completely spent, not from exertion, but from the frigid water.

I had new respect for Calgary’s river surfers. Not because of the ease with which they caught and slashed back and forth across the touchy wave on their ultra-short surfboards, but because they would spend whole days in the depths of the Canadian winter in the river, which is fed by glaciers. 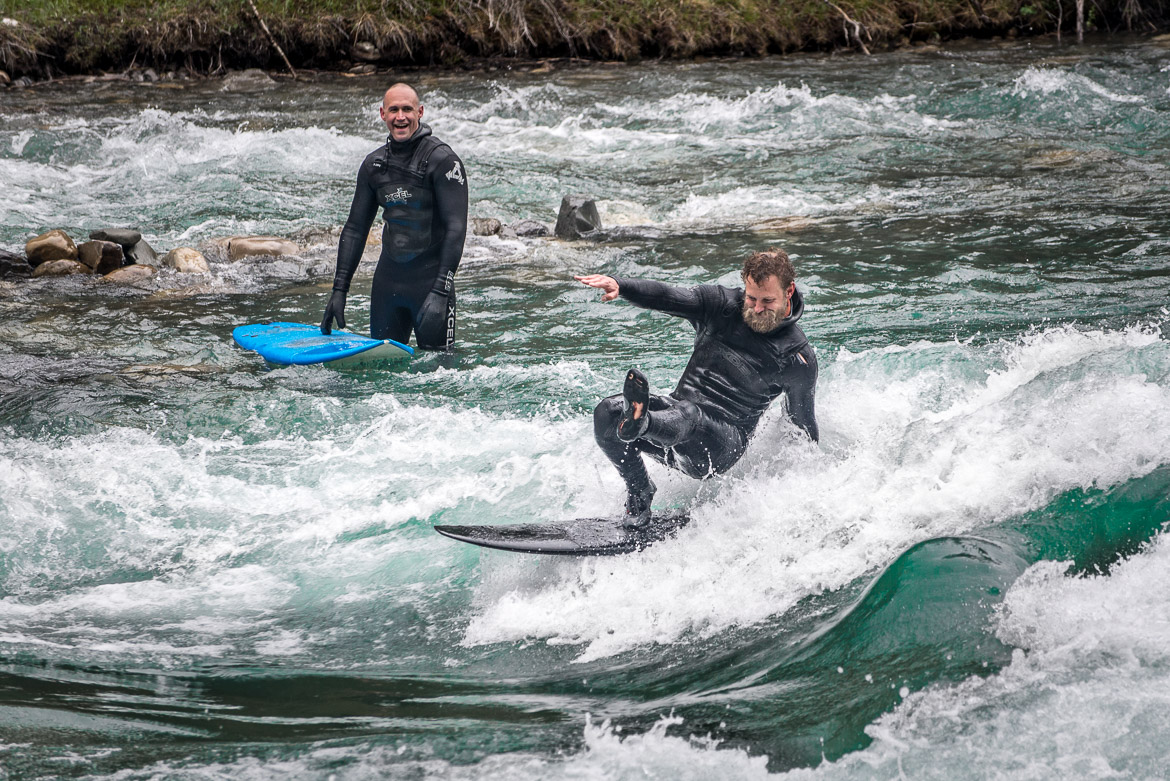 Jacob Kelly showboating on the wave that I could barely stand up on.

Calgary, just an hour’s drive East of the Canadian Rockies, is an unlikely home to a passionate and growing tribe of river surfers. Among the most prominent are Neil Egsgard and Jacob Kelly of Surf Anywhere, a company that builds river surfing waves whose goal is to make Calgary the Mecca of river surfing.

As of now, there are two popular waves in the area: The Mountain in Kananaskis (about an hour’s drive from the city) and the 10th Street wave right beside the downtown core.

Surf Anywhere is the only company in the world that specializes in building river surfing waves (they’ve been doing it since 2008) and in the Calgary area they have a two unique opportunities.

First, the government is planning to rebuild a kayaking course that’s also on the Bow River in the city. If Surf Anywhere gets their way, they will be building even more waves within the city limits during the reconstruction.

The second opportunity is in Kananaskis. The Kananaskis River is controlled by a dam. This means two things. The flow is always consistent, which means consistent surfing. It also means that the river can be turned off like a faucet, and heavy machinery can be brought in to build waves, making it easier and cheaper to build waves than in a normal river.

Surf Anywhere wants to take advantage of this and plans to have 2 – 3 new waves of varying difficulty and size built by the end of this summer.

I couldn’t wait until then to visit so, although I plan to return, here’s what it was like during my 5-day visit in May. 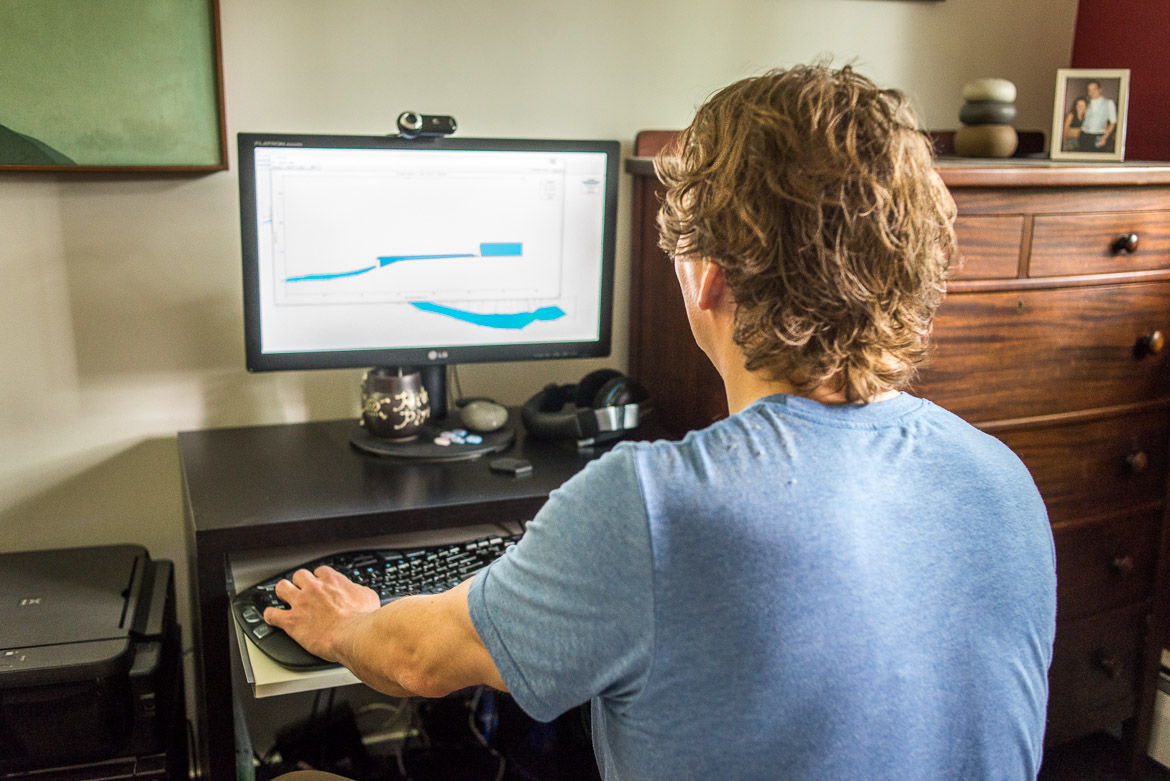 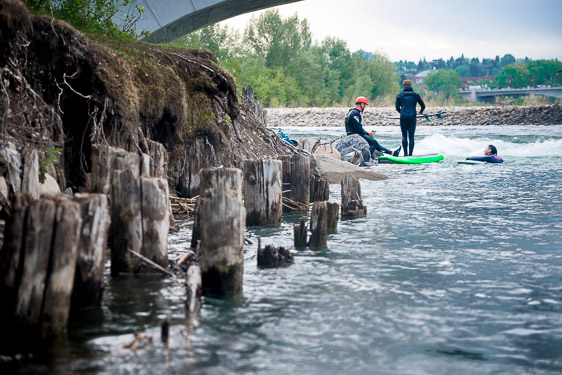 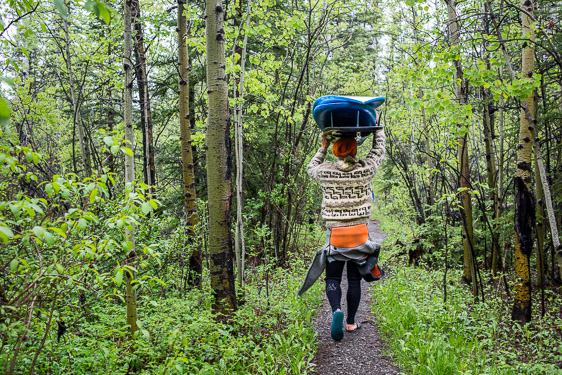 If you want to go surfing in the Calgary area — unless you’re friends with one of the locals who know where to find the rest of the half-dozen waves in the area that are more-or-less secret spots — you’ll probably have to choose between The Mountain and the 10th Street wave.

The Mountain in Kananaskis is about a one-hour drive out of the city, but it is a markedly better wave than the 10th Street wave. It’s bigger and wider, which makes it both easier for a beginner to stand up on and more fun for an experienced surfer to play on.

Also — if Neil and Jacob at Surf Anywhere have their way — Kananaskis will have multiple features for all skill levels very soon, making it an even more accommodating spot to surf. 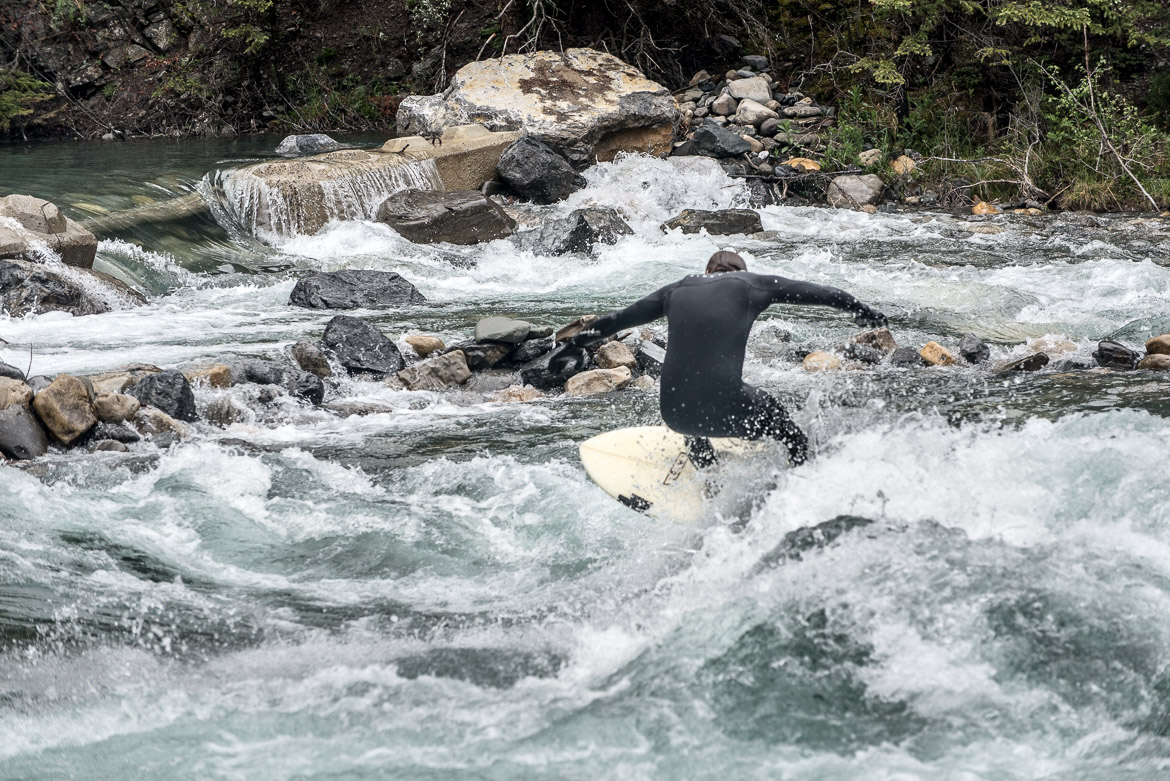 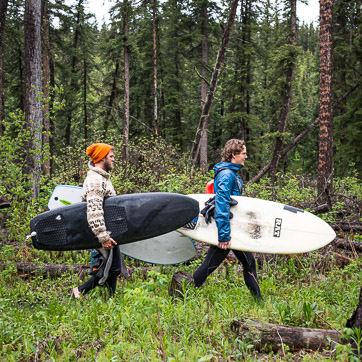 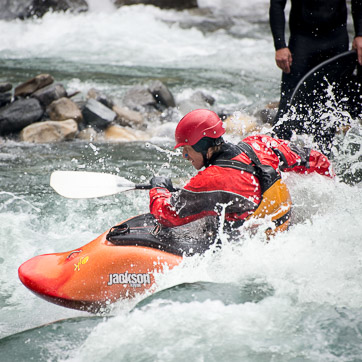 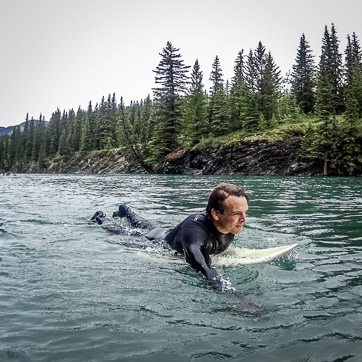 Neil again, looking kind of like a surfing Spiderman. The Kananaskis River is also popular for canoeing and kayaking. Here are two canoers bombing over The Mountain. 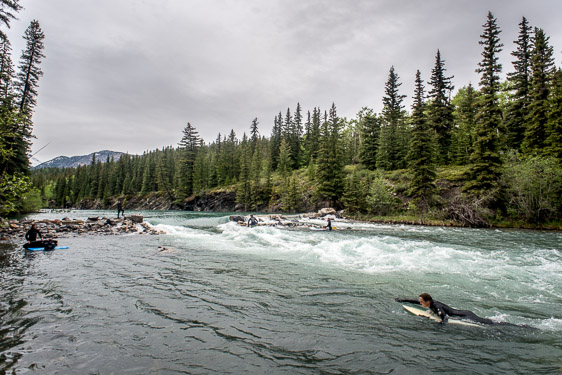 Jacob doing his signature move, where he falls back in the wave and then suddenly jumps forward with an ollie-like pop.

Surfing in Downtown Calgary on the Bow River

Calgary’s 10th Street Wave is located right below the 10th Street Bridge on the downtown side of the river, which is walking distance from the city center. This is where most Calgarians first discover river surfing and learn to surf.

The wave can be seen from a popular walking and biking path, the CTrain, and the 10th Street Bridge. I’ve only been there a few times, but each time about half-a-dozen people have stopped to ask about the wave and how to get started. (Pro Tip: Stop by on wave Wednesdays when Jacob brings extra gear for people to try.)

The wave’s high visibility is probably responsible for the growth of Calgary’s river-surfing community, which has expanded rapidly in recent years.

Although the 10th Street Wave isn’t the biggest or best, it’s convenient, which makes it the busiest wave around. If you are able to visit during working hours, you’ll usually find the wave empty and will have it all to yourself. It usually starts to get busy around 6pm after most people have finished work.

How awesome would it be to get to go surfing everyday after work? The 10th Street Wave lineup on a normal evening. 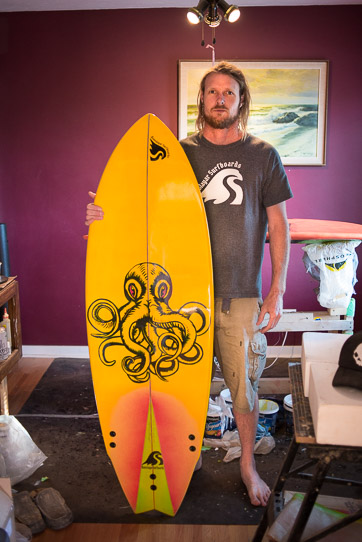 Chillin at the 10th Street Wave. 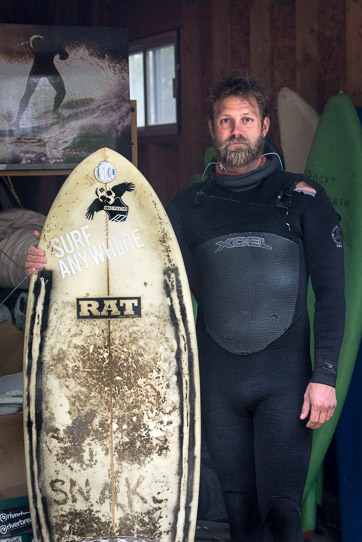 Check out the full gallery of river surfing photos here

Surfing is a notoriously territorial sport. Personally, I prefer to avoid popular breaks frequented by both visitors and locals because the friction between them dampens the experience for me.

The vibe in Calgary is not like that at all. Yes, there is a bit of territorialism, but it only manifests itself in the few ‘secret’ waves around Calgary known only to the most dedicated river surfers (who spent their time scouring the local rivers to find them). Even then, some locations are kept secret partly for safety (either they’re too advanced or the inevitable ride downstream after falling is too dangerous for most surfers) or because they’re only accessible via privately-owned land.

But that’s where any territorialism ends.

The Calgary surf community is overwhelmingly friendly and supportive. This is Canada, after all.

The lineup is full of friendly banter, and you don’t need to be an amazing surfer to elicit cheers from the crowd. Every time a surfer shows a bit of progression — stands up for the first time or learns a new skill — clappings and ‘whoo-hooos’ erupt from the banks.

That’s how surfing is supposed to be. The lineup at the 10th Street Wave. 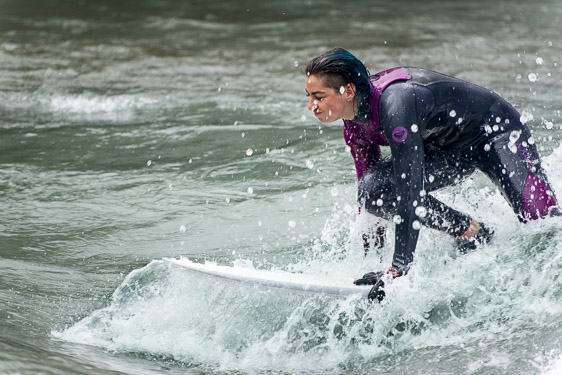 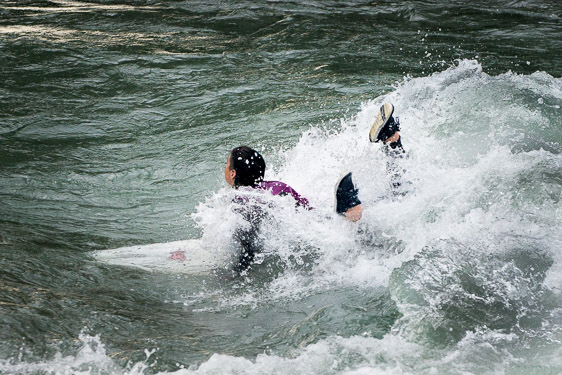 Sunset at the 10th Street Wave The one maneuver that can only be done on a river wave: an acid drop (throwing your board onto the wave and jumping on to it).

Undercurrents – The only shop I could find offering river surfing rentals, but I haven’t tried them so I can’t speak to the quality or service.

Riverbreak – The international river surfing magazine, including a map of river waves around the world.

Surf Anywhere – For more information on the wave builders themselves. Jacob on the 10th Street Wave at dusk.

Have you ever tried river surfing? How was it?

If you haven’t, would you?

Let me know in the comments!

Every week we hand-pick the best deals from around the web and deliver you up to 80% off your favorite brands like Patagonia, North Face, and Arc'teryx
Tweet
Pin17
Share
17 Shares

5 thoughts on “Are Calgary and Kananaskis about to become a river surfing mecca?”