You are here: Home > Photoessays > Deep Inside the Vancouver Riots 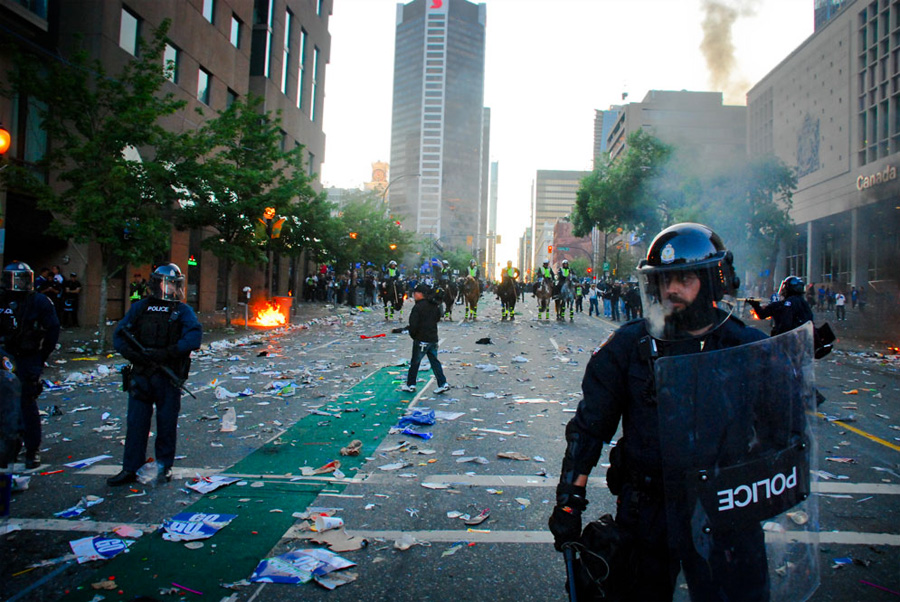 On June 15th, 2011 the Vancouver Canucks lost game 7 of the Stanley Cup finals in Vancouver. I was there, watching the game in my cousin’s condo across the street from the arena. Vancouver has a reputation for entertainment event-related riots. There had been riots the last time the Canucks lost in the finals in 1994, and even once when a Guns n’ Roses concert was cancelled. People around town had talked about the possibility of riots for weeks before the big game. When it started, I grabbed my camera and went into the streets to document it.

I also wrote one of the most discussed articles on the Huffington Post about the riot. You can read it here. 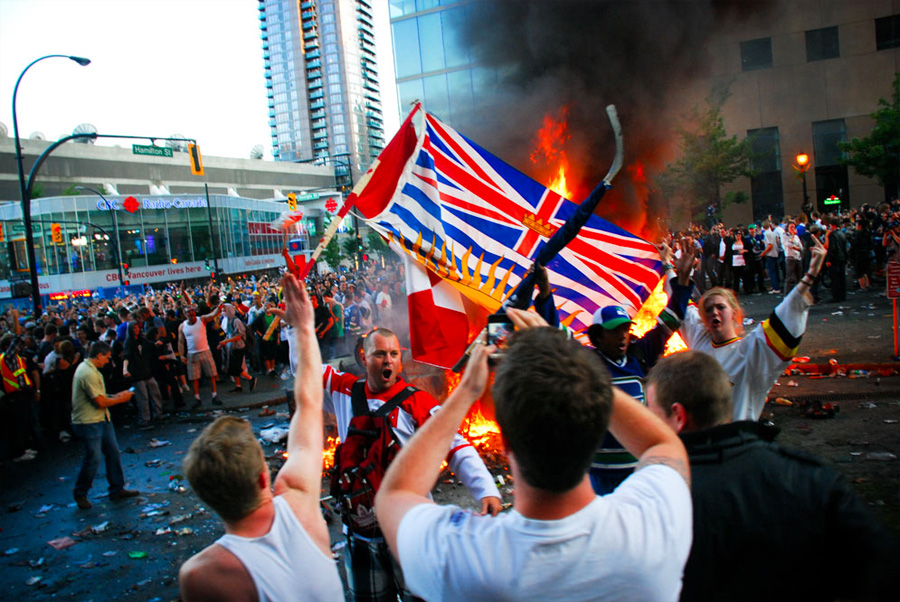 The riots had the feeling of a giant party–lots of drunk young people in the streets trashing the city for no good reason. There was some looting, but mostly it was senseless destruction. 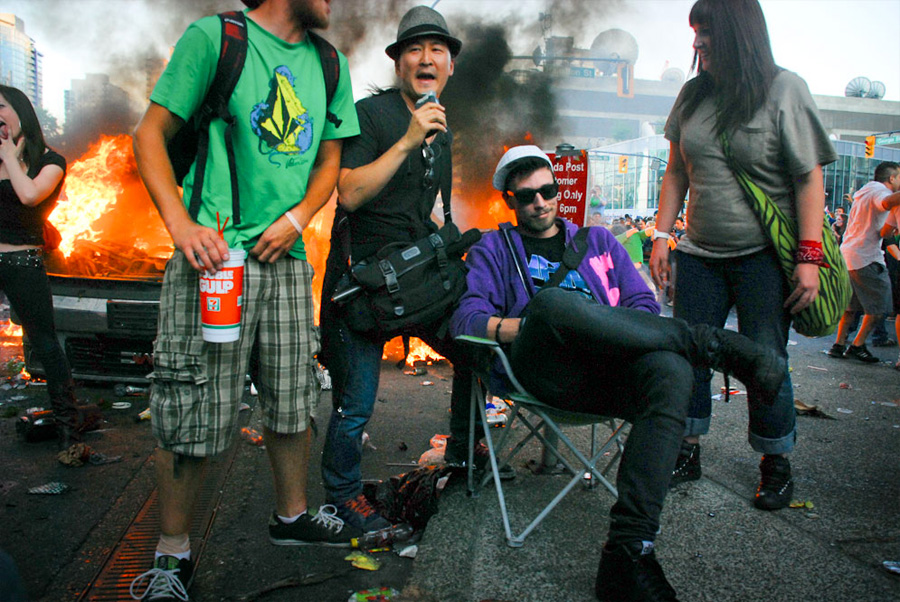 I came to an upended burning car in front of the Canada Post headquarters, as can be seen in the background here. People were posing in front it. Cameras and phones were in the air everywhere taking photos and videos. Facebook pages overflowed with tales from the riots. 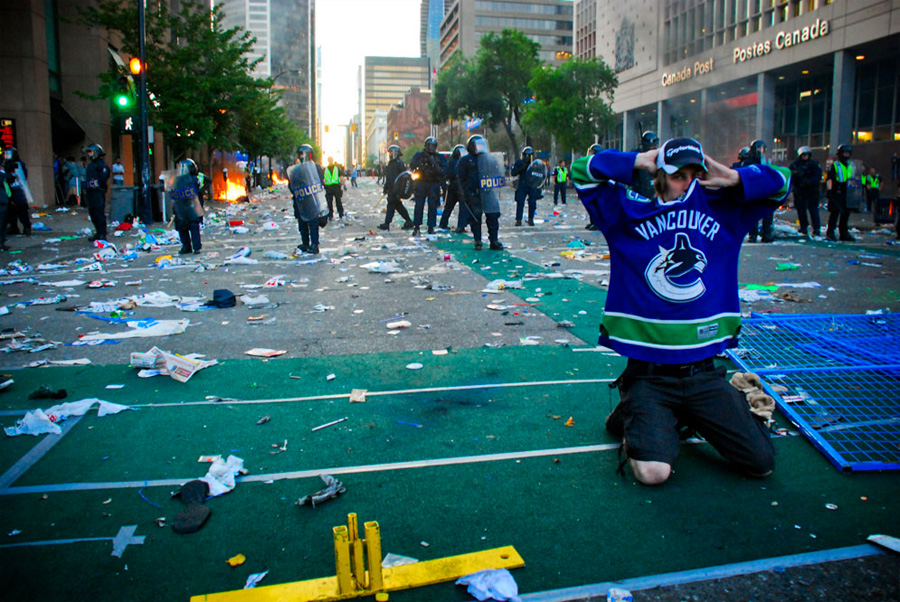 It wasn’t long before the police showed up. They showed admirable restraint. They were well prepared for this riot, since a similar one had occurred the last time the Canucks lost in the finals. They were also under pressure to ensure the safety of the rioters, because one had died in the previous riot when he was hit in the head with a rubber bullet. 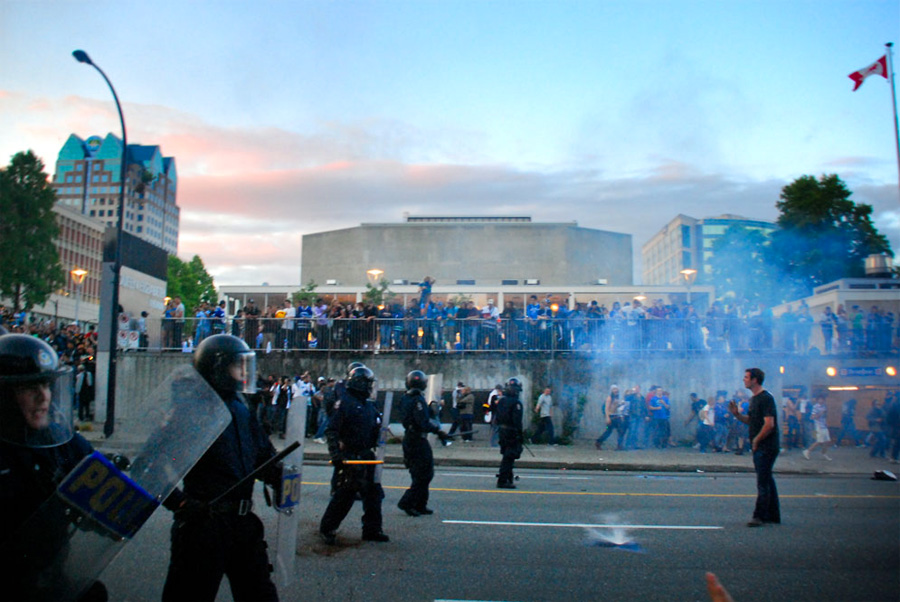 The police gradually pushed the rioters down the street away from the car. Some tried to stand their ground. 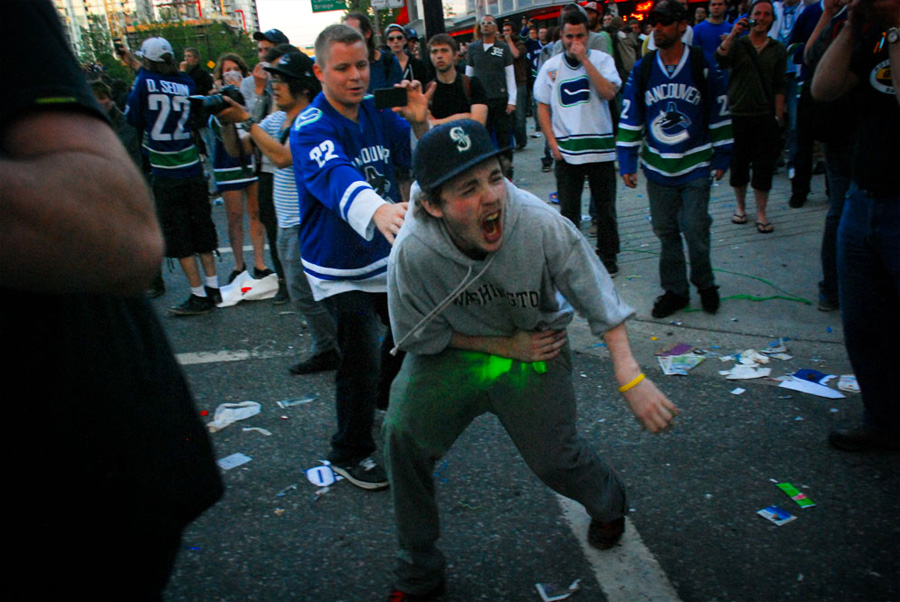 The police shot flash-bangs into the crowd to push it back. The police officially claimed that they did not use any rubber bullets, although I thought that I was grazed by one later in the evening. I’m not sure what they shot this guy with, but they hit him right in the groin! 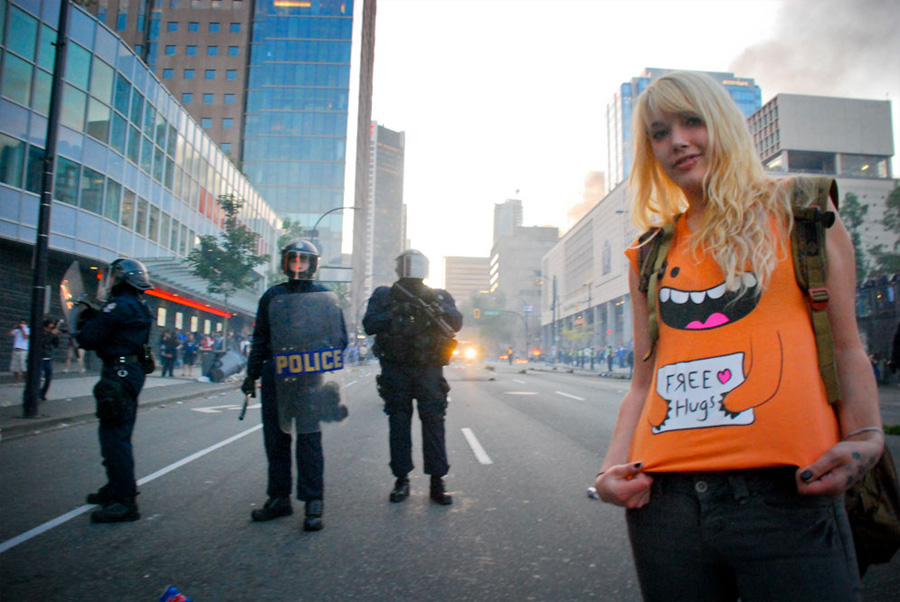 As the police were pushing us down the street, this girl stopped to pose for me, and a few others, to take her picture (she was later filmed lighting a police car on fire–the video is at the bottom of the page). 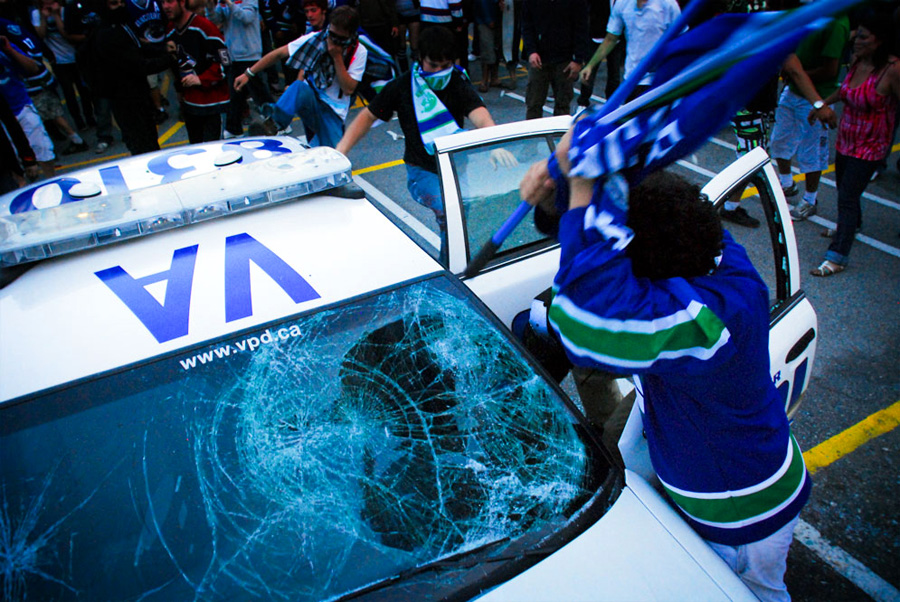 Suddenly, people began fleeing the street and running into an adjacent parking lot. The reason: they had found two unattended parked police cars. 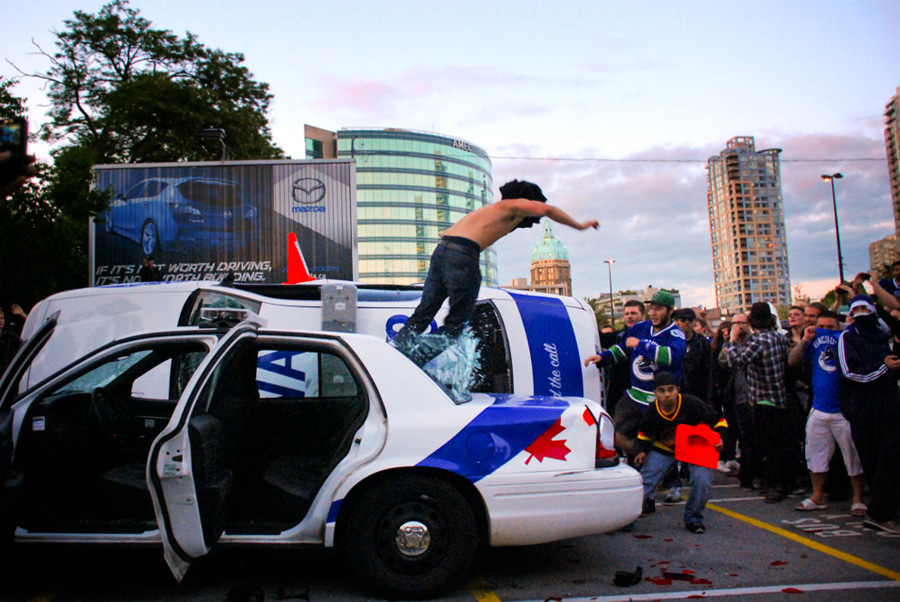 They started trashing them immediately, breaking out all of the windows. 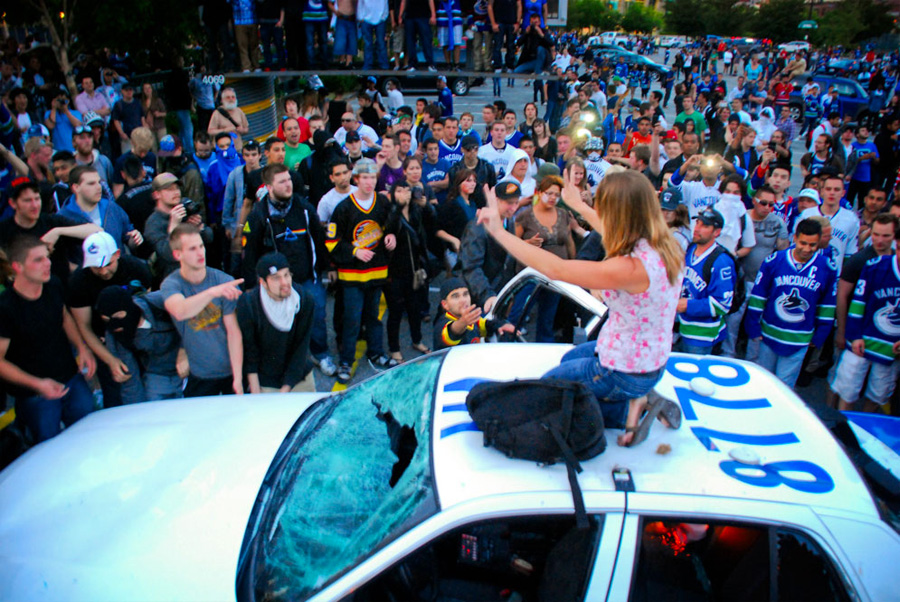 This woman sat on top of one of the police cars to prevent the crowd from flipping or burning it. She was unsuccessful. The girl pictured above lit it on fire while the woman was still sitting on it (as can be seen in the video at the end of this essay). You can see the glow from the first flames in the back seat of the car. 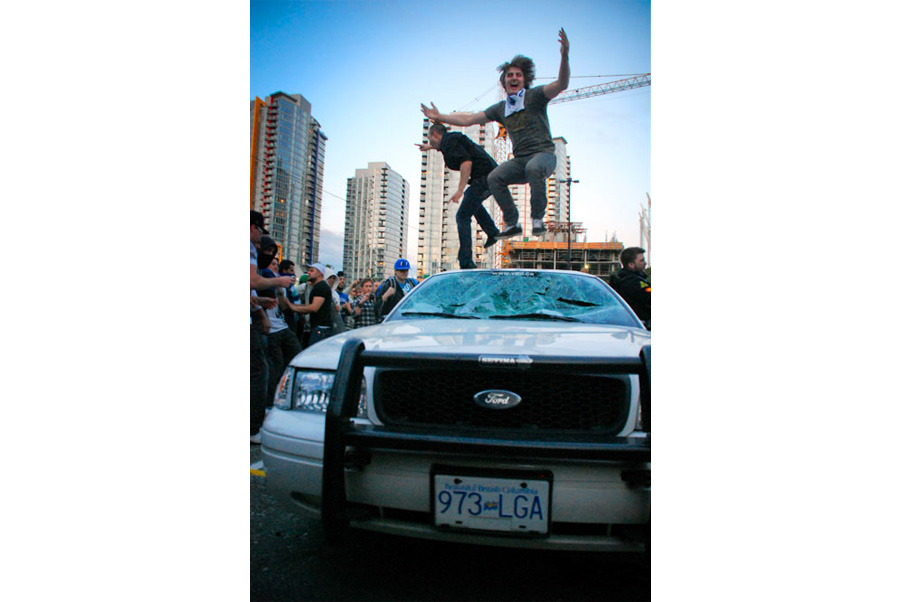 The trashing of the cars continued. 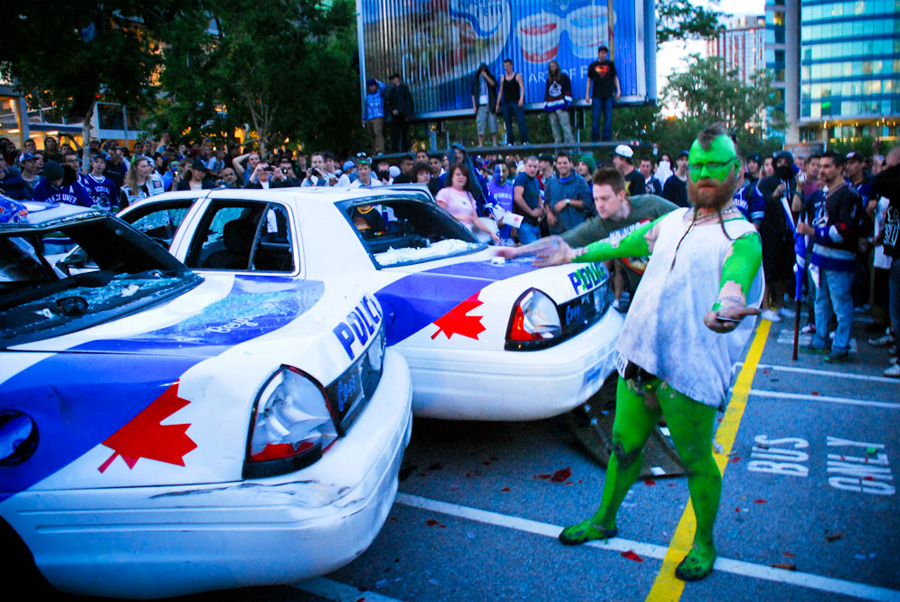 A green man showed up. I spoke to him. He was a dick. 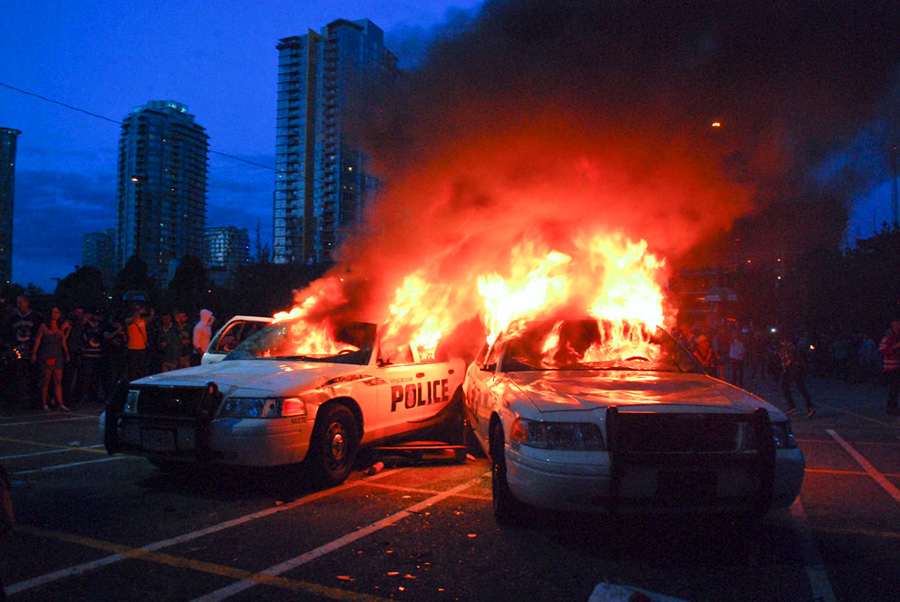 Finally the police cars were burned. Then I went home. 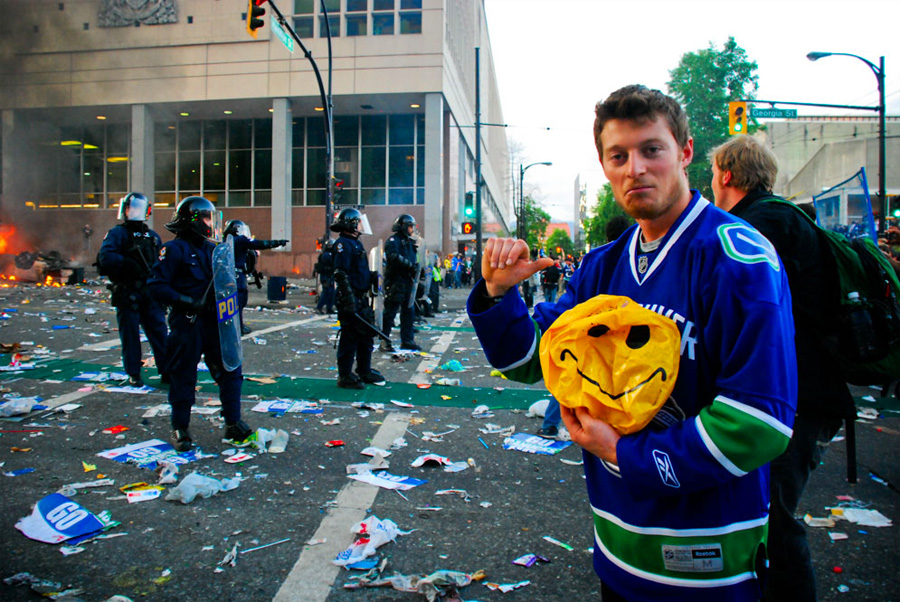 The city was outraged and embarrassed by the riots. Social media was rife with condemnations of the senseless destruction. Volunteer groups quickly sprung up to clean up the mess. 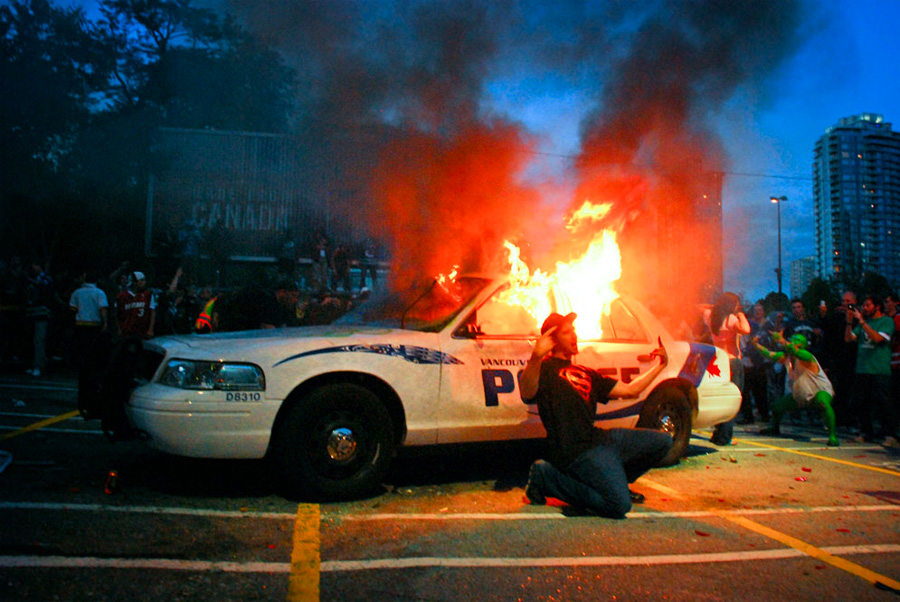 I was amazed that night by the things people were doing in front of the cameras, like this guy posing for a picture in front of a burning cop car. Cellphones and cameras were everywhere. More than 1,000,000 photos and 1,200 hours of video were turned over the the Vancouver Police. Websites sprung up to identify looters and rioters. Many arrests were made, including that of the young woman who posed for the picture for me. The video that lead to her arrest is below.

The girl in orange smashes the cop car with a piece of wood and then lights it on fire starting around 6:57.

17 thoughts on “Deep Inside the Vancouver Riots”