You are here: Home > Photoessays > Climbing to Angel’s Landing

Angel’s Landing (formerly known as the Temple of  Aeolus) is a tall narrow tongue of rock with practically sheer cliffs on three sides standing more than 360m (1208 ft) above the valley floor in Zion National Park.

The trail to Angel’s Landing is only 3.9km (2.4 mi) long, but climbs so steeply that one section had to be carved out of solid rock. The last part of the trail rises steeply while skirting the edge of a 1000 ft sheer cliff. There is no guardrail. The park admits to five fatalities on the trail, though others have been reported.

I visited Zion in September 2012 with my girlfriend Emilie and our friend Danielle. We knew we had to climb to Angel’s Landing. It has been said to be one of the most spectacular trails in the world. 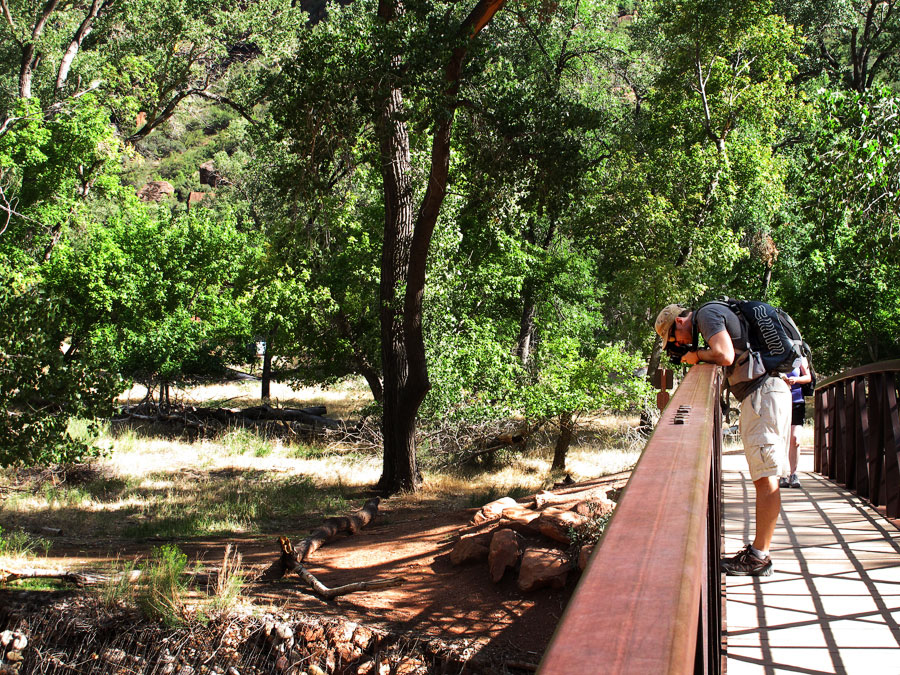 The trailhead is located at The Grotto drop off for the park’s shuttle bus service (few cars allowed in the park). The trail immediately crosses the Virgin River. I had to take a photo of it. 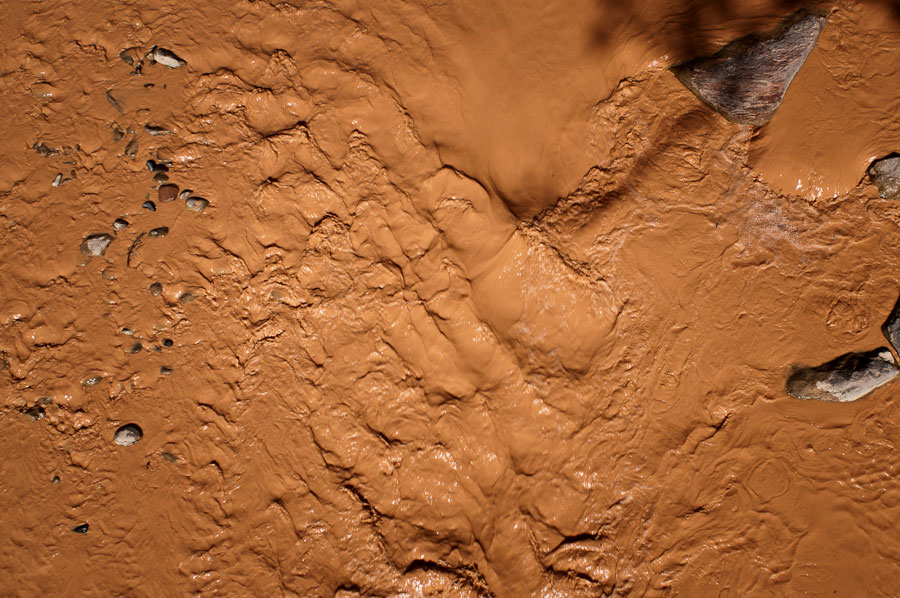 It had rained heavily the previous day, and the river turned muddy with the distinctive orange sand that Zion is known for. It looked silky and delicious — like thick chocolate milk. 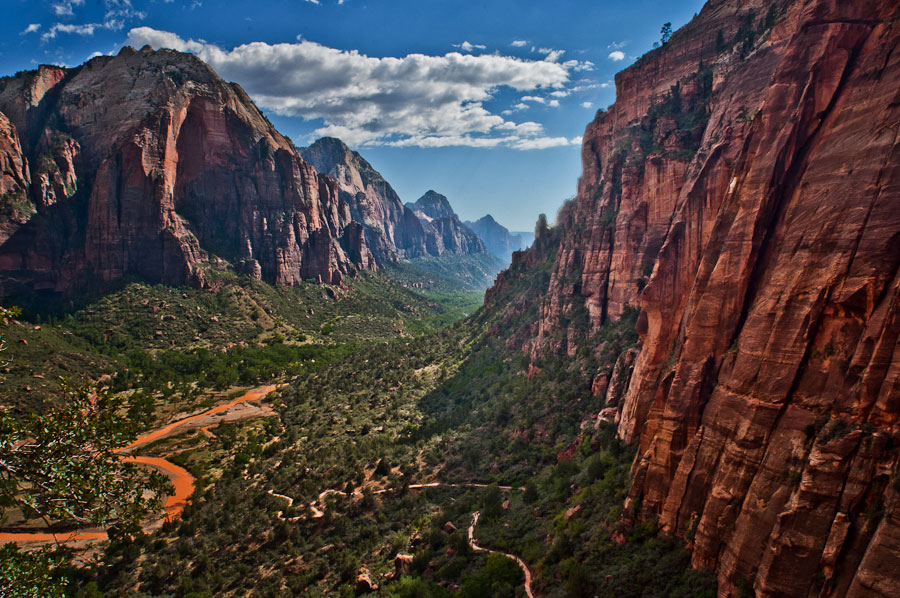 At first the trail climbs slowly from the Virgin River, as can be seen in this photo from above. 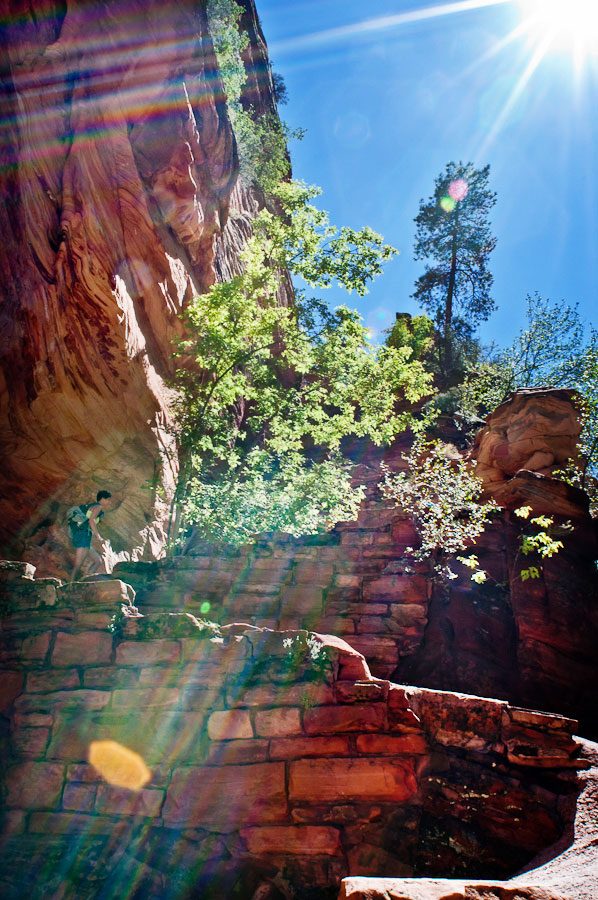 Then it hits the mountainside and begins to climb steeply. At first the paved pathway snakes back and forth across the ever-steepening cliff. Then it becomes too steep for even for switchbacks, and the trail becomes stairs. 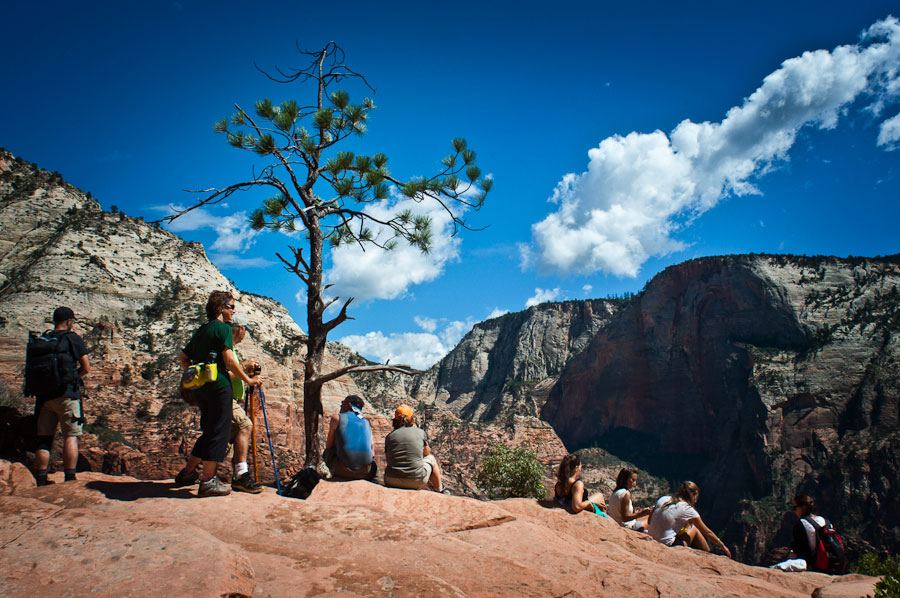 At the top of the stairway is Scout Lookout. This is where those who don’t want to cross the final exposed stretch of trail to Angel’s Landing wait. Danielle has never liked heights much, and decided to stay there. 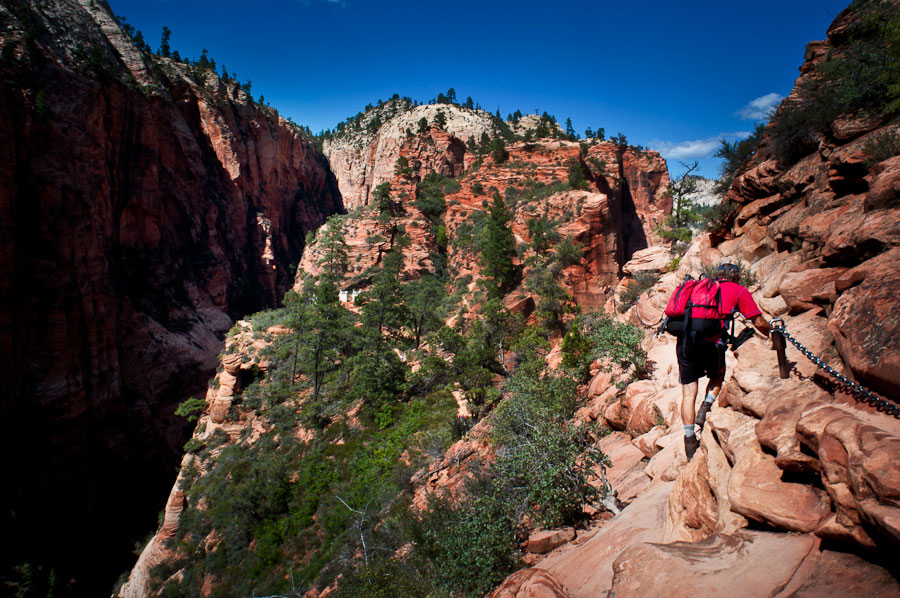 Emilie also wasn’t feeling well (we had a few drinks around the campfire the night before) so she started the hike with me to see if she wanted to do it. This was the first stretch of exposed trail we crossed. It was also probably one of the most dangerous on the hike. 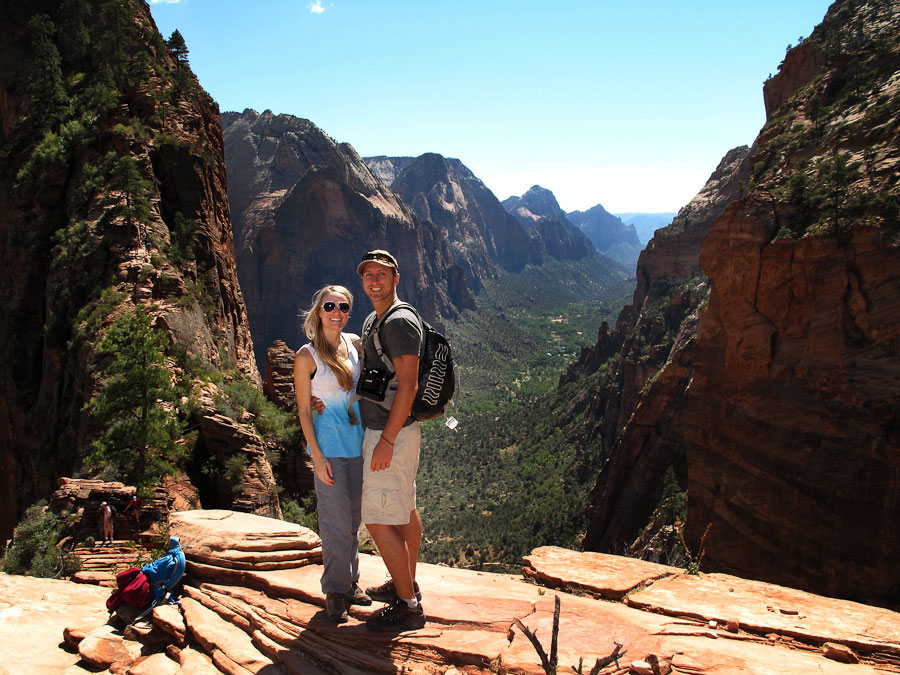 The view of the canyon from the other side was great — so we asked some guy to take our photo. Then Emilie turned back and I went on alone. 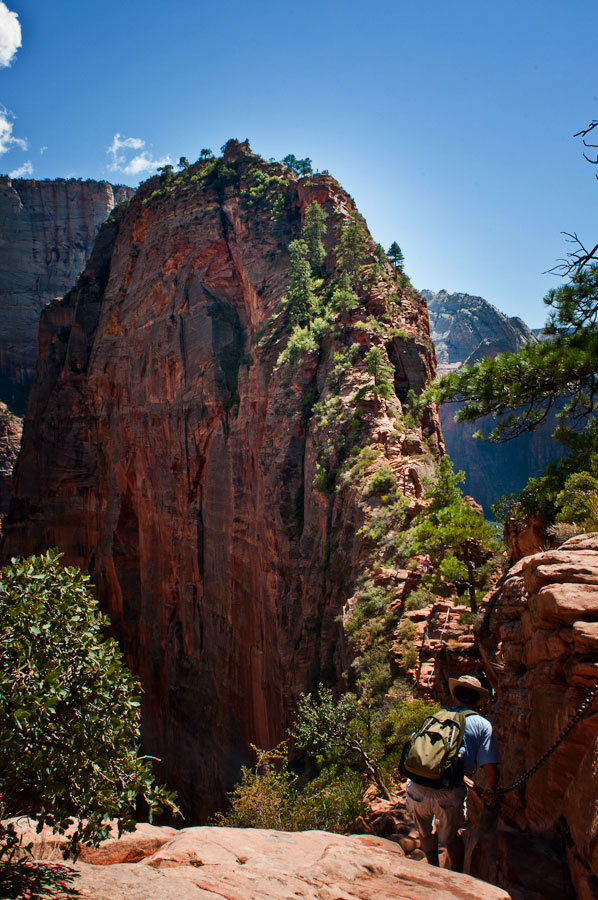 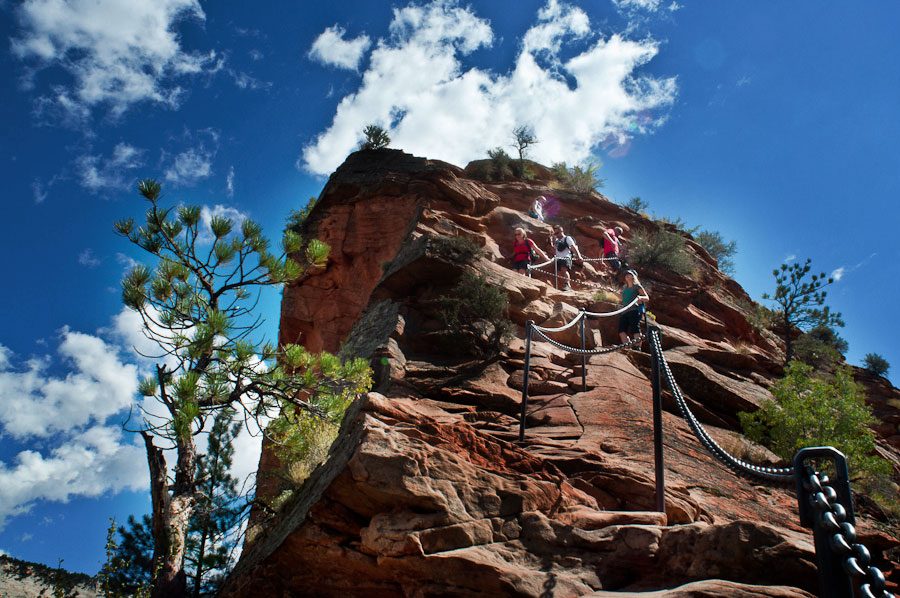 And this is what it looked like while climbing. 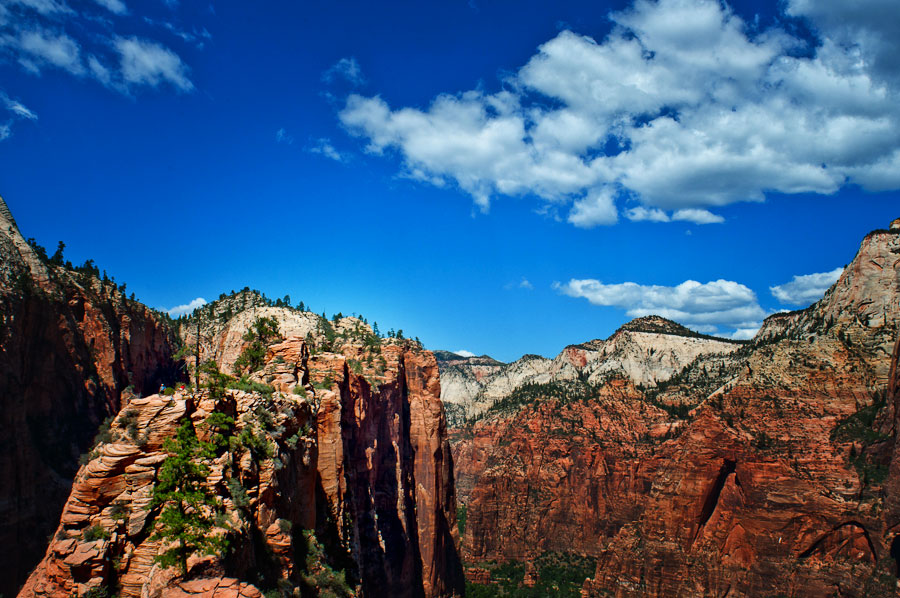 Here is the view looking back at Scout Lookout from high on the trail. 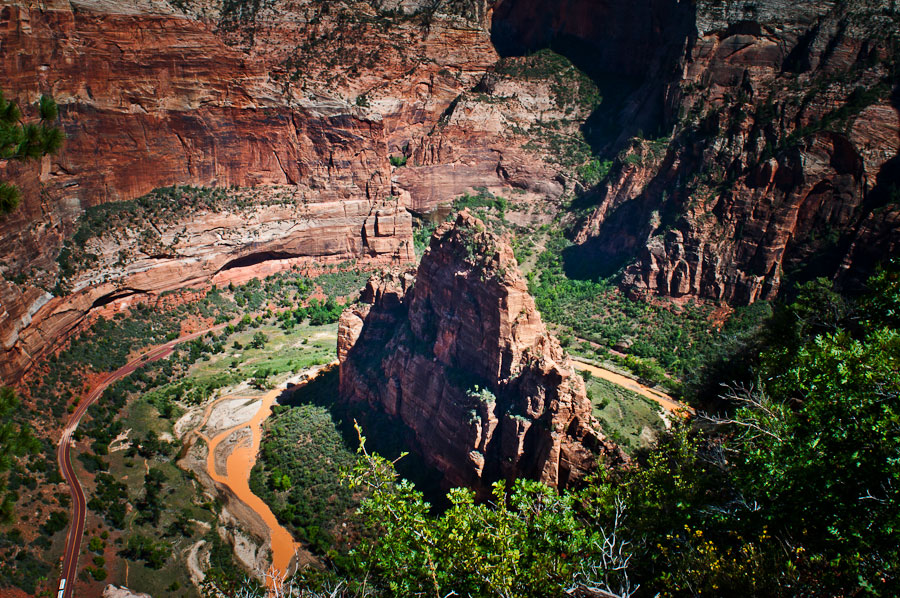 Near the summit a turn in the trail offers a perfect view of Big Bend below. 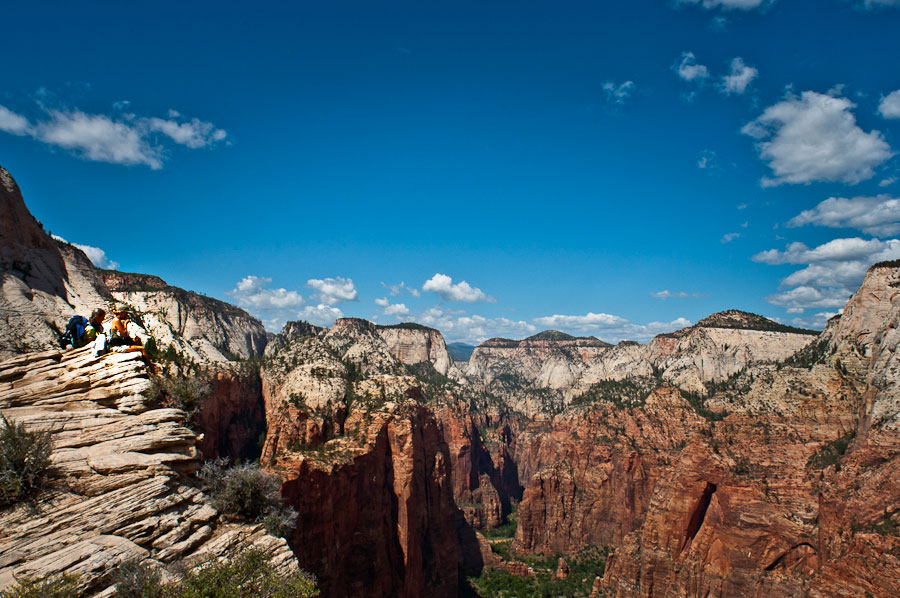 And then you reach the top plateau. Here’s a couple dangling their legs into the abyss.

And here’s what you’ve been waiting for — a view fit for angels.

41 thoughts on “Climbing to Angel’s Landing”