You are here: Home > Blog > Why Perpetual Travel is Unrealistic (and It’s OK to Go Home) 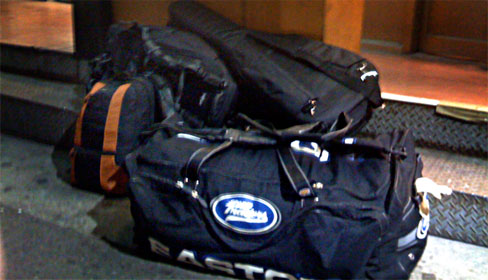 Above: Everything I owned in the sidewalk waiting for the bus to the airport

After being abroad for six years, moving home was scarier than leaving in the first place.

When I say ‘home’ I mean returning to North America, where people speak English, the culture feels less exotic, and food and housing are incredibly expensive compared to Asia and Central America, where I’d been living.

I was worried that I wouldn’t be able to earn enough money as a travel writer to get by. I was worried about running into tax problems after having an international  bank account for so long. And, more than anything, I was afraid that I’d get sucked into the North American rat race that had consumed so many of my friends, and somehow forget about the freedom of travel.

Basically, I was afraid of becoming broke and boring.

So, you’re probably wondering, why would I move home?

I had to. There were so many reasons. My father’s health has been slowly getting worse and, although he’s not in imminent danger, it’s apparent that he’s not going to be around forever. As amazing as travel is, it’s certainly not more important than making the most of the dwindling time that I have with my father.

Also, my sister is having a baby. In fact, as I write this, she’s 8 days overdue and ready to bring my parents’ first grandchild into the world at any moment. I was always close with my aunts, uncles, and cousins growing up. I don’t want to be a distant uncle.

And, my girlfriend Emilie also had to be near her family because a close family member  became ill.

A lot of travel bloggers write about perpetual travel. They talk about breaking free and living some overly-idealized life on the road. They tell you that you can gain financial independence, leave your job, and travel forever.

But, for most people, that’s not realistic.

Long-term travel is great for a lot of people at certain times in their lives. However, after a certain age many of us want a place we can call home. We want to spend time with the people we love while we still can. We want to explore our relationships with our families and friends which, in its own way, is just as challenging, frightening, and rewarding, as exploring the jungles of Borneo or the swimming among whale sharks in the Philippines.

Many of the best-known travel bloggers have decided to spend more of their time settled in one place. Last year Nomadic Matt announced that he was choosing a home over life on the road.  My good friend Ayngelina of Bacon is Magic had many of the same concerns I did when she moved home last year. This story is a familiar one. The traveler returns home to find that the life there had gone on without them and they no longer fit in

There’s not getting around it. Moving home is hard, But, I’m here to tell you that, although it’s frightening and depressing, it’s OK to move home.

There are a lot of upsides to my new life in Utah.

First, I can be healthy — which is extremely hard to do on the road. I can go to the gym and cook for myself (I don’t care much for restaurant food) as much as I want to. I love that.

Second, like a lot of people, I never explored as much near my home as I should have. When you live in a place, you tend to forget that it deserves as much exploration as a foreign one.

Third, I can finally, after years of blistering sun, annoying sand, and swimming in warm ocean waters, enjoy a full season of freezing my ass off on the ski hill.

Last, having a home doesn’t mean you can’t travel. I still get out a fair bit. Here’s what I’ve done at home and abroad since I’ve been back:

And best of all, I’ve gotten to know Emilie’s wonderful family, and spent time catching up with my own.

If you’re tired of travel, you’re not alone, and it’s OK to go home. I’ve said it before, and I’ll say it again. Adventure is not an activity, it’s a state of mind.