You are here: Home > Blog > The 48-Hour Calgary Adventure

This trip was sponsored by Tourism Calgary, but all opinions are my own.

In May Calgary Tourism offered me a challenge; to see how many adventure activities I could fit into 48-hours in the city. They’d send a film crew to document it and they’d foot the bill for the project.

Would I do it?

Hell yes I’d do it. I wasn’t going to turn down my third chance to be in a professional production (this was the first, and this was the second).

They asked what activities I wanted to try.

“Let me do some research and get back to you.” I replied. My fingers pecked my keyboard with hummingbird-like ferocity and my browser tabs multiplied like bunnies in the spring.

I’d heard there was a standing wave that you could surf somewhere in Calgary. I looked that up. I searched for a parkour club, because I’d always wanted to try it, and I figured I must also be able to kayak on the Bow River.

But then I ran out of ideas, still shy of 2-days worth of adventures.

What else could I do?

Mike, from Tourism Calgary suggested bobsledding and a trip down the fastest zipline in North America.

Perfect. The deal was sealed.

“Tell the editor who bleeps out words in the video that I’m sorry in advance, because this is going to be pretty bleeping rad and I will bleeping say so.”

In June, we executed the plan. You can get an idea of how it went from the video at the top of this blog post.

Below is the full story.

I’ve always wanted to try parkour, also known as freerunning. The sport first entered popular culture when its founder was hired for the groundbreaking foot-chase scene at the beginning of the James Bond movie, Casino Royale. Parkour is basically applied gymnastics used for moving gracefully and acrobatically through urban landscapes.

The fellows at Breathe were very friendly and started me off with the basics. We did a quick round of lessons, including how to swing from a horizontal pole to leap and grab a building ledge, pole walking 12-feet in the air, and hucking flips into a foam pit.

The pinnacle of the lesson was reached when I tried to do the human flag, which is pictured below. What you don’t notice at first, is that my teacher is totally holding up my legs.

If you’re in Calgary and want to try it out, I highly recommend it. Lessons start at $25 for one and go down as you purchase more, while gym drop-ins are just $15.

Day 1: Afternoon | Ziplining and Bobsledding at the Canada Olympic Park

In 1988 Calgary hosted the Winter Olympics, and the Canada Olympic Park where they held ski jumping, bobsledding, and other gravity-assisted events, still sits on the western edge of town with many of the facilities open for use year-round.

Before this trip I had a vague idea that visitors could try bobsledding in the COP. I didn’t know, however, that it could be done in summer. And I had no idea that the COP was home to the fastest zipline in North America, on which you reach speeds over 120km per hour and drop 100m over a distance of just 500m.

The view from the top of the zipline, which was the top of the ski jump during the olympics, is amazing. During the descent, you go so fast that you have to throw out a parachute to slow yourself down and you’re strongly advised by staff to lean way back with your legs in the air when the you hit the end of the track.

The stop is rather abrupt.

For video purposes, I got to do it twice, which I wasn’t complaining about at all.

Our bobsled ‘guide’ was a hefty Australian — one of their Olympic bobsledders.

The bobsled ride is pretty intense. The bobsled rattles manically and the g-force around the corners is powerful.

We got to do it three times, and each time it got a bit smoother as we learned how to brace for the corners.

This wasn’t exactly an adventure, but Palamino Smoke definitely deserves a nod. This place is a Calgary institution. It’s one of the grimier areas of downtown (not that Calgary really gets very grimy), which only adds to the the charm of what most Calgarians say is the best greasy rib house in the city.

And by many Calgarians I mean my sister’s husband and his friends, who were very jealous when they heard where I ate.

I’d have to agree. We had a dinner of beer and a enormous meat platter with ribs, chicken, and fries swimming in minced garlic. But I’d have to say my favorite was the bacon-wrapped corn on the cob.

You now have all the necessary information to decide if you want to eat there. Either you’re garlic slathered, bacon-wrapped [insert any food on the planet here] kind of person, or your not.

I’ve had my share of kayaking adventures. Well, mishaps, actually. Six of one, half-dozen of the other I say.

But this was my first chance to take real kayaking lessons and learn some whitewater technique. To top it off, my friend Adam — the drummer for Open Sails who I first met in Taiwan — would be joining me.

We headed out to the tree-lined shores of the Bow River — an enormous river that runs through the city — in Bowness Park where we were met by Steve Wapple, our instructor from the University of Calgary Outdoor Center.

First we paddled slowly around a calm eddy and Steve explained a few different strokes and techniques. After that, he showed us how to get into the fast water without tipping and how to navigate.

Soon we were cruising down the Bow River in the sun and dipping ourselves in the water just to cool off. Near the end of the trip we found a standing wave where we all took turns kayak surfing it — good practice for what was to come. 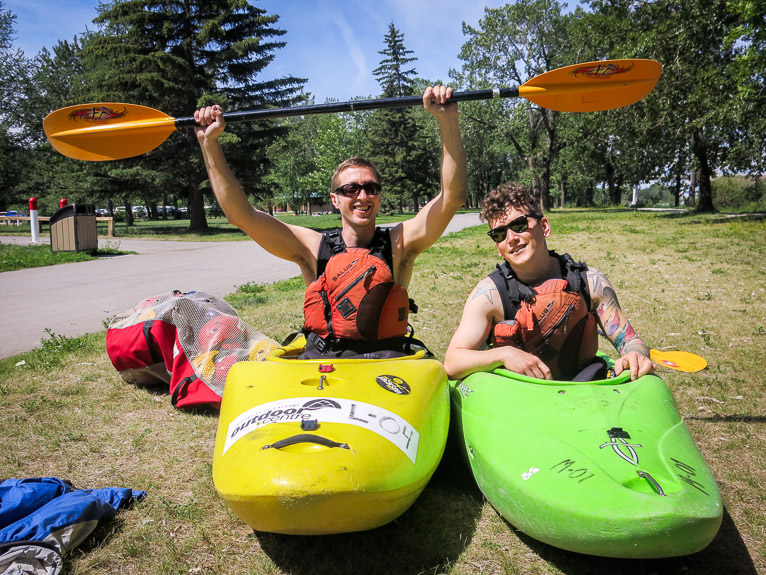 We headed down to Calgary’s trendy Kensington neighborhood, to Contanr Bar a cool little spot built out of 100% found materials in the alley beside a posh bar/restaurant that gets so busy it can actually send people to sit on in the alley on chairs people threw away to eat off of recycled pallets…

It was a really chill little spot. Adam and I caught up, laughed about the old days, munched on duck fat popcorn and deep fried pig ears, as scratchy music from the vinyl on the vintage record player filled the alley.

I’ve done a bit of surfing here and there. I’ll be the first to admit that I’m not that good. But I thought this was going to be really easy.

You see, the hardest part of learning surfing is knowing how to get in the exact right place to catch the wave. If you can do that, the rest is relatively straightforward.

The wave in Calgary is a standing wave in a river. It doesn’t move. You can see exactly where you’re going.

As usual, I was astoundingly wrong.

What the wave gives away by being stationary, it makes up for by being fickle — especially on a day when the river is low, as it was when we visited.

Getting into the wave laying down is fairly easy, but standing up without causing the board to nosedive or be sucked back over the wave requires a quick and precise leap to your feet.

I have to thank the editors of the video for making it look as though I may have actually stood up. I came very close once or twice, but never actually did.

That really doesn’t matter though. The worst day of surfing is still better than the best day not surfing, so it was a win.

And it was one of the friendliest lineups I’ve ever been in — mainly because most of the surfers out there were able to bond based over the difficulty of simply standing up on that wave.

It’s not over for me and that wave. Not by a long shot. My sister lives in Calgary and I visit several times a year.

Round 2 is coming soon.

Our last stop of the day was at Calgary’s new posh whiskey bar, One18 Empire. It’s an upscale place with a selection of whiskeys that would make Jack Daniels blush and bartenders that know their stuff.

We munched on maple-wrapped dates and a charcuterie of cured meats and cheeses while we tasted fine whiskeys from around the world to top off the 48-hour adventure.

5 thoughts on “The 48-Hour Calgary Adventure”