You are here: Home > Blog > A Frozen Safari: Dog Sledding in Finland
By Guest Blogger on December 8, 2012 in Blog 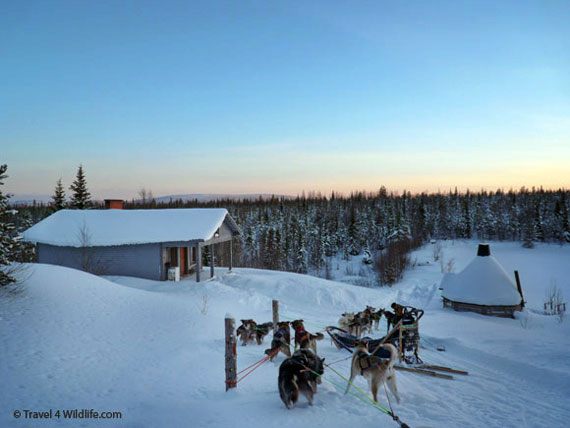 Our second cabin had running water and a ticket to a Northern Lights display.

The morning sun warmed my face while the arctic wind cooled my lungs. We were advancing at a steady pace through remote trails and into the forest. There was no sound but the crunch of my dog team’s paws sinking in fresh snow as they pulled the sled. I was happy, feeling free from my ordinary life back home.

I’d always had a fixation on the idea of dog sledding in the Canadian wilderness, as well as a fixation on wolves. I dreamt of staying in little cabins and listening to the howl of wolves as night fell. But I was living in Europe and only had ten days of vacation time to work with. Searching for alternatives, I found the perfect trip much closer to home in Finland. However, I couldn’t find anyone to come with me (“It’s too cold!”) Sometimes you can’t wait for others to make their mind up. If you keep waiting, you might never do what you want to do. So I went by myself. 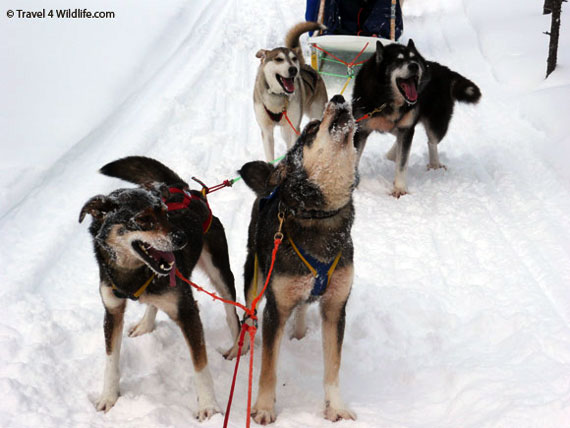 A stop on the trail was a great time for serenades

When I arrived at the secluded home northeast of Kuusamo I learned there would be five of us on the tour. We spent the first day learning how to harness the dogs and how to operate our sled.  The following morning we set off on a four-day safari into the Finnish wilderness.

Each day we drove the sleds for many hours covering distances of 20 to 57 miles. Each night we stopped at a remote wilderness cabin. We rode across frozen lakes, through pristine forests and we skirted the Russian border.  I could see Russia! We struggled up the hills and slid down the other side. All this just a few miles short of the Arctic Circle. 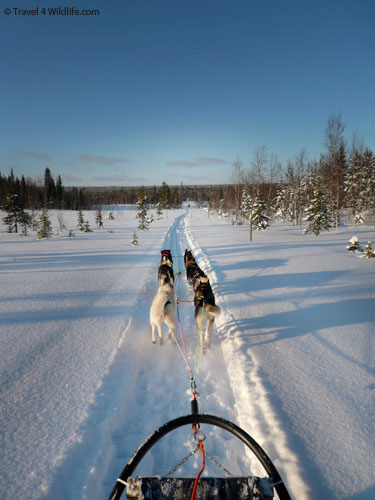 Running along the Finnish landscape.

Our first night we stopped at a rustic cabin by a lake. It didn’t have electricity or running water or a bathroom. For water we had to drill a hole in the ice and scoop water from the lake. For a bathroom we had to walk to an outhouse in sub-zero temperatures. Perhaps this is why nobody wanted to come with me.  They must have read the fine print. Though I found I was glad to be by myself. It felt more intimate and liberating. 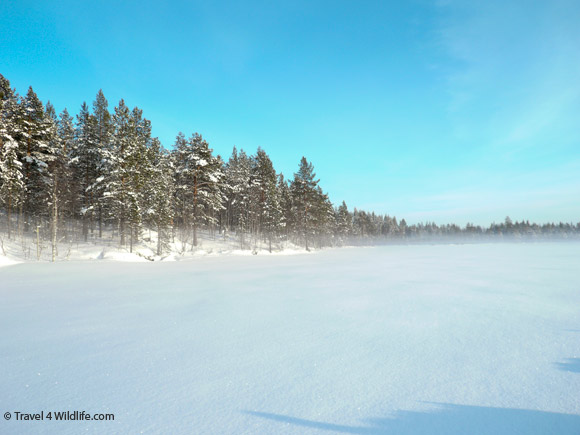 Morning mist on a frozen lake

The first thing we did upon arriving at each cabin was to feed the dogs.  They deserved it. They had pushed and run like crazy to take us to all these places, though they never seemed tired. And each time they figured out it was time to go, they would start jumping and barking and howling in happiness.  These weren’t particularly big dogs; if they hadn’t been pulling me around these hilly forests I would have never guessed they were such strong sled dogs. 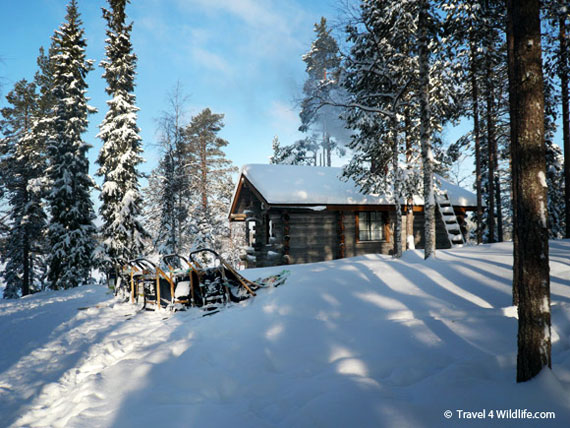 Our first cabin by the lake

After feeding the dogs it was time for the humans to have their treat: a steam in the sauna and grilled sausages on the fire. After a long and tiring day on a sled, sausages never tasted so good, believe me.

By the end of the second day of our frozen safari I already knew my dog team well. I knew who was really pulling and who was trotting along. I knew when they needed to stop to answer nature’s call and I knew which ear they preferred to have rubbed. They accepted me and I became a part of their team. 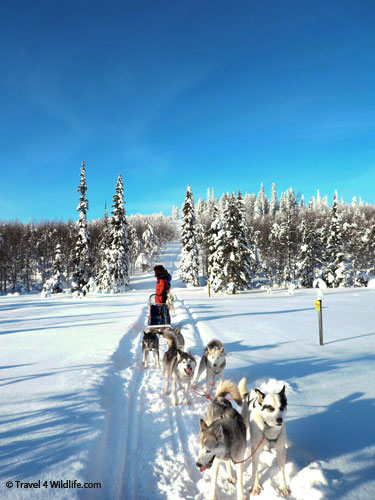 Waiting for the rest of the group to catch up.

It was our second afternoon on the trail when we realized something was different. The sky had a different color. It was very subtle, like a violet fog. The sun wasn’t shining as it had the day before. We didn’t put it all together until night fell and one of my tour mates looked out the window, “The Northern Lights!”

Stampede. We ran outside, waking up all the dogs and provoking a great concert of barks and howls and yaps. We looked up and the sky was turning green. 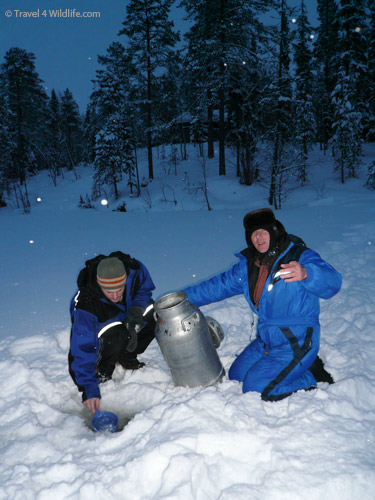 Gathering water from a frozen lake

Walking into the darkness toward the middle of the lake, we laid on its frozen surface to admire the lights.  We felt such awe for the spectacle above us that we didn’t even notice our freezing backs or the icicles coming out of our noses. This was no time to feel cold. It was a time to realize how lucky we were to be alive and to witness this magical moment. The lights carried on their show for hours. They danced and sang for us. They changed costume from green to purple to red and back to green. It seemed as if the forest itself was on fire. 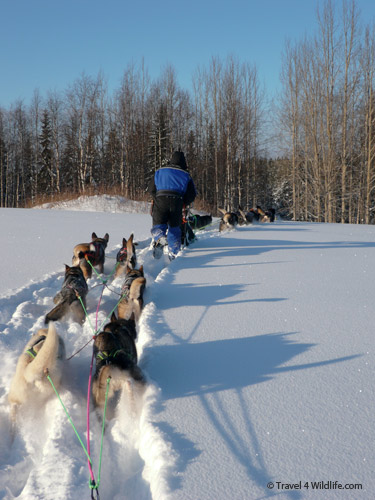 Snow was so deep that the dogs seemed to disappear in it.

That night’s show was so incredible that it made the national news.  We were the lucky group of the season. It was the only night we saw them.  They came and went just like that.

On our last day we were heading back to the lodge when our host stopped his sled and signaled me to stop beside him. He then lead me 20 feet off our path, pointed at a set of tracks on the ground and smiled at me.

“There you have it. Your wolf.”

A lone wolf had crossed our path in front of us and disappeared into the pristine forest.

I looked into the forest and wondered if he was out there watching us. I couldn’t see him but I knew he was there. And that is all I wanted. 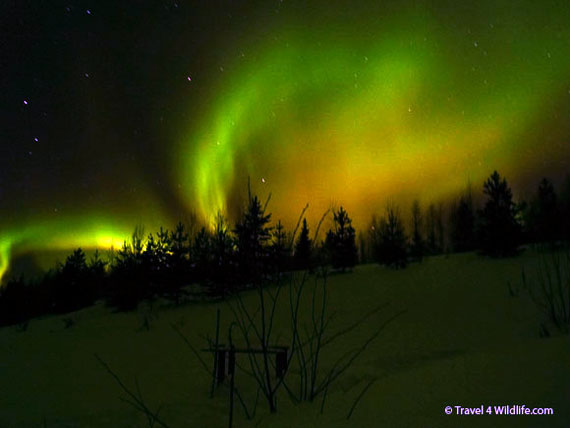 The Northern Lights gave us an spectacular show

Cristina Garcia is a zoologist, wildlife photographer and co-founder of the travel website www.Travel4Wildlife.com where she writes about responsible wildlife tourism. Her travel memoir Dual Nature will be published in 2013.

This post was written by a guest blogger. If you would like to share your adventure travel tips or stories with the adventure travel community, you can find out how on the Write for Me page.
View all posts by Guest Blogger →

2 Responses to A Frozen Safari: Dog Sledding in Finland