I had just returned to Canada after living in Taiwan for six years and had snowboarded only once in that time. It was Easter Sunday, and our local hill was closed, so my brother and I were hiking up it to session the snowboard park. A girl was snowboarding down the hill. The sun was shining and the snow was soft. She had a big smile on her face. She carved in a long arc on her heel edge and then slid to a stop ten feet away, and plopped down on her butt in the snow.

“Want some mushrooms?” She offered gaily.

“No thanks. We’re having Easter dinner with the family later.”

She stood up, wobbled a moment, and cruised off down the hill.

Having lived abroad for so long I had been going through reverse culture shock. I constantly felt anxious, unaccustomed to being around Canadians, but at that moment I felt like I was home. I was back on the hill with happy, friendly, inebriated people.

That’s what Kootenay ski culture is all about: good people, goodwill, good times, and good intoxicants.

When it comes to sports it’s easy to get caught up trying to tackle more extreme terrain or master impressive tricks and forget why we go to the hill—to have the best time that we can.

I lost the plot the other day, when I went to Lake Louise. I had been given a press pass in exchange for writing about their Bonus Week promotion, during which any person with a season’s pass from any ski hill could ski at Lake Louise for free.  I was so caught up trying to get good pictures for my story that I forgot to chill out and enjoy myself.

Kootenay ski culture was in full effect. The first gondola that we rode up had an empty beer can in it (at 10 am). The second was cloudy with weed smoke from the previous occupants. As we sat in the pleasantly pungent gondola my phone rang. It was Brandon, a friend from high school that I hadn’t seen for years.  We had grown up, and learned to snowboard, together. He had seen on Facebook that I was at the hill. He was on is way to the hill too and would arrive around noon.

I was surprised that Brandon coming snowboarding. Brandon was the kind of guy who would always go for big air—as big as possible no matter what the conditions—and had crushed his heel jumping an especially big gap on an icy day three years earlier. As far as I knew he wasn’t supposed to go snowboarding.

While waiting for Brandon at the lodge I was chatting with a pair of women who had come from Invermere. They both had season’s passes at Panorama, which had gotten them free passes to Lake Louise for the day. When Brandon arrived and they heard him say that he needed to buy a lift ticket, they insisted that he take one of their season’s passes to get a free one.

Free pass procured, we headed up the hill. Brandon needed to be gentle with his foot.  On the first run I wanted to go to the snowboard park to take pictures, but Brandon didn’t because he didn’t want to be tempted by the jumps. So, I put my camera away, and we went for a couple of fast cruising runs. After an hour we decided to give his foot a break and go sit on the patio. As part of Bonus Week the lodges on the hill were selling $7 burger and beer combos.

It wasn’t until we took off our boards that it turned into a really good day. It was the first time Brandon and I got to hang out one-on-one in over a decade. We caught up over our burgers and beers in the sunshine and snow. He told me about his business in Calgary and his wife and daughters.  I told him about my life in Taiwan and writing career. We talked about the old days and old friends. When we finished our beers, we bought a couple more. Seeing Brandon made it a better day than any amount of fresh snow could have.

I’ve only been home for one month, but I’ve seen Kootenay ski culture everywhere.  My father told me that I should join his friends for their annual end of season P.P.P.P.P. The acronym stands for powder, pedal, paddle, potluck, piss-up, and puke. In this one-day event this group of fifty- and sixty-something professionals and business owners ski, bike, and canoe, and then eat and drink until they vomit. Well, maybe not everyone barfs, but it’s a nice idea, and it adds an extra ‘p’ to the acronym.  Hearing about this group made me hopeful about the prospects of life after middle age.

My brother, a professional snowboard instructor, recently finished his avalanche safety training. After the final test the students celebrated in the bar at the hill. This is what he said happened: “Out of the corner of my eye I saw this girl move off behind a pole.  It looked like she was taking off her clothes. Suddenly she jumped out from behind the pole naked and started running. Some guys had pushed two of the long wooden tables together. She sprinted at the tables. The guys sloshed two jugs of beer onto the tables as she dove onto them and slid to the end. Then the guys got naked and did it too.”

That’s right. Naked picnic table beersliding. That’s how we roll in the Koots.

Actually, that’s wrong. Allow me to correct myself. In the Kootenays this is how we roll: doublewide in the shape of a cone with frozen fingers on the chairlift.

So, in the end I didn’t get many good pictures on my trip to Lake Louise. But I had a wicked day, and I did get one picture that will always remind me of it. This is it. 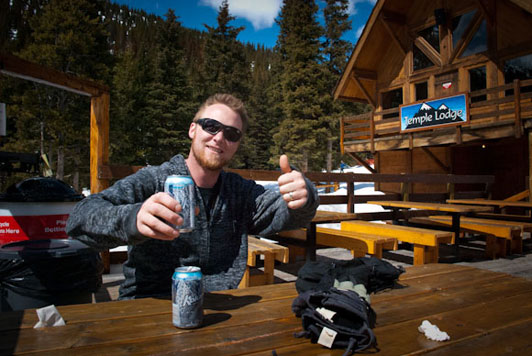 I’d like to thank Lake Louise for their Bonus Week promotion, which was undertaken in the  sharing spirit of Kootenay ski culture, and provided the inspiration for this post.

The header photo was provided courtesy of mhaithaca on Flickr.

Every week we hand-pick the best deals from around the web and deliver you up to 80% off your favorite brands like Patagonia, North Face, and Arc'teryx
Tweet
Pin8
Share
8 Shares