My Moment in the Sunshine

You are here: Home > Blog > My Moment in the Sunshine

The first part of this story involves five weeks of anxiety and headaches over whether or not I’d been a first-class idiot. I entrusted $250 USD in cash to a virtual stranger to secure a spot for me through his “special backdoor connections” on a gorilla trek in the Bwindi Impenetrable Forest in western Uganda. I had arranged to stay with him five weeks hence as a couchsurfer, and relied only on couchsurfing karma that he wouldn’t gyp me.

One thing after another held up the permit; my safari-guide friends said the deal didn’t sound legitimate. When I arrived at his place five weeks later, he had no permit. Yet, on the day he promised, he woke me inside my mud hut on Lake Bunyoni at 5:00am and we puttered in a boat through the darkness – there was no electricity on that side of the lake — to a car waiting on the far shore. We drove through heavy fog at an excruciatingly slow pace, and after the fog cleared, at an alarming pace that sent women and children, cows and goats fleeing from the road into the ditches.

When I arrived at the ranger station, they told me nobody else had shown up for the trek. Probably because it had been practically raining solidly for several days. I knew that typically treks only went out when they were booked with seven or eight people. My heart sank. Very, very low.

“You are very lucky!” the ranger said.

“You’ll have the gorillas all to yourself! This is almost unheard of. We’re taking you to the largest habituated group.”

I filled out some paperwork, paid some more money, and I was off with my guide and armed ranger. The sun was shining clear and bright for the first time in three days.

The ground was muddy, rocks slippery, and my pants were immediately drenched from brushing against the rain-soaked foliage. My guide was in contact with the trackers, who had left several hours earlier to locate the gorilla group. After only an hour, we had come to a spot where we would leave the trail and cross overland to encounter the gorillas. Apparently, this was an unprecedented pace. With little ol’ me as the only tourist, we made good time.

As soon as we left the trail and began descending a steep slope, the origin of the phrase, “impenetrable forest,” became crystal clear. My guide hacked through branches and vines with a curved machete, and half the time our feet weren’t even on the ground, but on top of slippery masses of plant growth. This, in and of itself, was quite an adventure. The armed ranger quickly and deftly whittled a walking stick for me to help steady myself as we traversed the steep slope (I had foolishly declined one at the beginning of the trek).

We eventually emerged into sunlight near the bottom of a wide ravine and stepped over an enormous pile of poo. My guide stopped and told me to put all food and water inside my daypack. He warned me not to look a charging gorilla in the eye, but said it was OK, otherwise, to catch their direct gaze. He asked if my camera was ready and, after a few more steps, he parted some bushes with his machete. There, less than 30 feet below me, were two mountain gorillas lazily grooming each other.

I was so stunned and overwhelmed by their massive presence, I didn’t even think about raising my camera. After a couple minutes, my guide said, “It’s OK to take pictures.”

Tourists are allowed only one hour with the gorillas, and this is strictly enforced down to the minute. Gorillas are huge, but the impenetrable forest is astounding in its ability to hide them. If I had been with seven other people, I would have had to wait for a turn to peer through the bushes at the gorillas, and overall, I would have had only a fraction of the time I had in direct visual contact. My guide was extremely accommodating to me, gently pushing aside branches that might have been in the way of my camera. 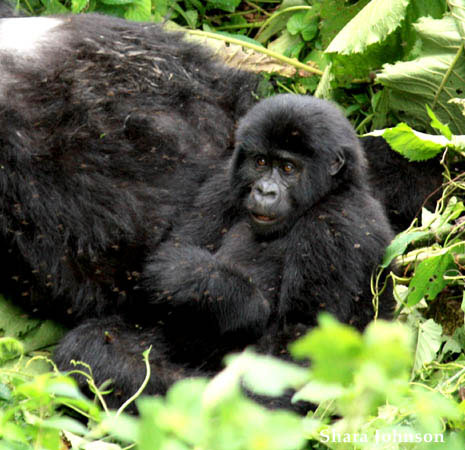 “You are so lucky,” he said to me. “They are here in the open ravine. Seldom can you see their whole bodies like this out in the open. Also there are two silverbacks here at the same time. And look … there is the new baby, only three months old!”

I followed his pointed finger to the bottom of the ravine and squealed like a piglet over the sight of the tiny gorilla suckling at its mother’s breast. The mother, my guide said, is the largest female gorilla anyone around here has ever seen. 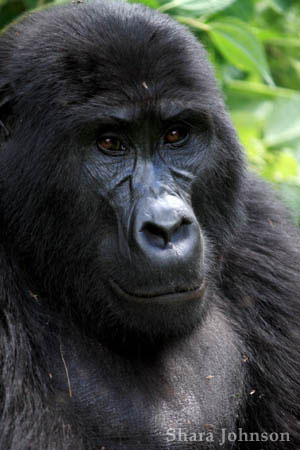 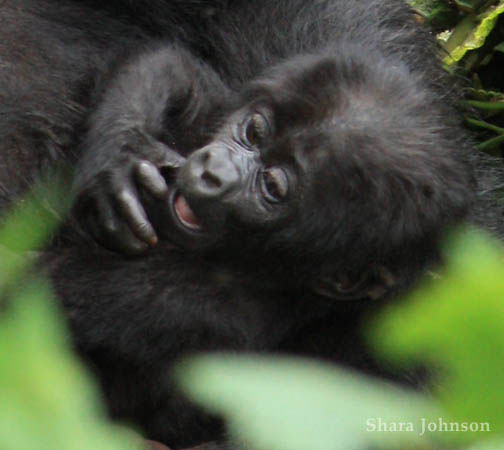 As she fed her fragile baby, one of the silverbacks lumbered over to her, his ponderous weight crunching and crackling branches beneath his feet. The demeanor of the gorillas all around me – they were behind, before, and on either side – was so mellow that I didn’t feel frightened, but witnessing their sheer size moving through the forest so close to me did strike a rod of electricity into the core of my adrenaline system. Picturing one of these guys running toward me led to instant heart-rate elevation. 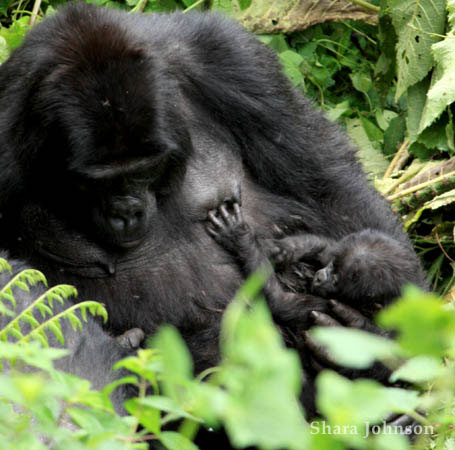 I spent my time about 50/50 looking through a camera lens and simply standing quietly in the gorillas’ presence. And because I was by myself, it was truly a meditative, I venture to attest even a spiritual, experience. No other tourists whispering, clicking cameras, pushing me out of the way to see. My guide and the trackers politely refrained from conversation as well. In all, we saw 13 gorillas.

“An hour?” I thought he was joking. I looked at my watch. Time had indeed betrayed me. The universe had just sped up to a rather unkind speed. It was difficult to put my lens cap on and turn away. In truth, I nearly cried. 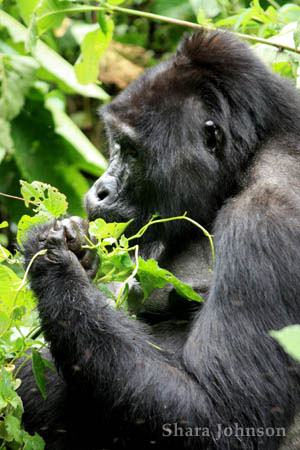 Crack crack craaaaack. Everyone was suddenly alert; my tears immediately retreated. Directly above us we could hear creaking and cracking noises. We barely had time to process they were the sounds of a tree being felled before the sounds of branches and leaves smashing through other branches and leaves overtook us. Nobody even had the wits to move. The top of a tree landed on the ground barely 20 feet away from us. None of us moved or spoke as a gorilla ambled down the slope behind the tree he had just nonchalantly pushed over nearly on top of us. He sat down 20 feet away, so we were in a triangle – people, tree, gorilla. He wasn’t interested in eating from the tree; he simply sat down seeming extremely pleased with himself. I think he just wanted to toy with us. 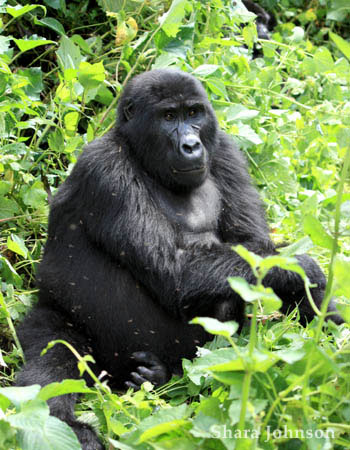 The trackers and guide looked at each other.

“OK,” a tracker said to me. “This is a special case. You can have five more minutes with this guy.”

That’s actually the first time the thought breached my consciousness: “This is a once-in-a-lifetime experience, Shara.” I felt almost panicked, worried somehow I wasn’t capable of soaking it up enough. I stared at that contented gorilla like I was trying to mind-meld with him. Me and the mountain gorilla, basking in a window of sunshine in a crack in the impenetrable forest.

We made good time hiking back out. As soon as we reached the ranger camp, raindrops began falling. As my guide filled out my trekking certificate, the drops smudged some of the lettering. The clouds had parted, literally, just for me and my gorillas.

Shara Johnson lives in the small mountain town of Nederland, Colorado. You can follow her adventures abroad at SKJtravel.net.

4 thoughts on “My Moment in the Sunshine”