Today is not designed for strenuous exercise. The sun is insistent, an angry man who won’t let a bar-room argument go, unflagging as it sends out wave upon wave of raw heat. The sky continues the theme, a fierce blue, offering barely a wisp of friendly cloud. This morning is not for long walks, but for lounging and soft sleep.

Yet I carry on along the rough-shod road that runs northwest towards Deep Bay. As I round a corner I catch sight of the water, its surface mirroring the sky. Several local families are gathered on the beach putting the Caribbean warmth to appropriate use, gathered around smoking barbecues and paddling in the shallows. I’m tempted to follow their lead, but my destination waits ahead, shimmering in the haze.

Fort Barrington was not a major stronghold in its 18th century heyday, but its position was perfectly chosen – high on the summit of a steep bluff, a waspish creature keeping an eye on this corner of the island. As I begin to tackle the slope, I marvel at the effort it must have taken to construct it. The path winds through thorny patches and across bare rocks where lizards scuttle – but even with just a small backpack it is slow going. The thought of venturing this way carrying hewn blocks of stone – or the cannons that once adorned the ramparts – adds extra sweat to my brow. 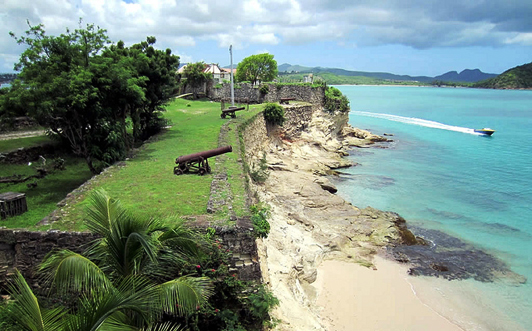 The view from the top justifies the ache in my calves. Fort Barrington is a glorious ghost, its upper deck still monitoring the horizon, its gloomy interior filled with faded memories of gunpowder and munitions. A plaque on its rear wall marks it as a British defensive point, even if the words that stake the claim have largely been eroded by time. The panorama is wide, the Caribbean Sea laid open beyond. No ship could approach unseen. 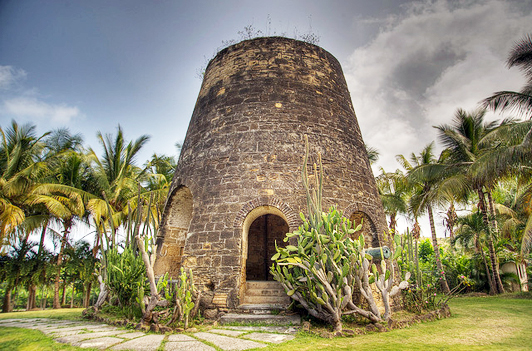 Antigua is dotted with these pockets of the past when imperial Britain protected what was one of its key outposts. Whilst most people on holidays to Antigua content themselves on its wonderful white sand beaches there’s lots to explore if you fancy something a bit more strenuous. The island is well provisioned with terrain for hiking. Although relatively flat (at least compared to its visibly volcanic neighbors Montserrat and Nevis) it rolls and rears in all the right places, forested lumps offering a challenge to anyone keen to stretch their legs.

On another blazing day, I mount an assault on a hilly corner in the south east of the island. Here, history presents itself in the best-preserved remains of the UK’s ‘Rule Britannia’ phase. Starting out from the aptly-named English Harbour – where ranks of yachts are moored– I set off. The road curves upwards swiftly as it tacks and weaves towards Shirley Heights.

It takes me an hour to reach the summit, the sun jabbing at me all the way to the Block House. The thick walls of this former gunpost provide a shelter from the solar rays. Some 250 years ago, they provided rather more. A few footsteps take me to the elevated watering hole of the Shirley Heights Lookout Bar, where the 490ft view from the terrace shows the prize that these lofty fortifications guarded, Nelson’s Dockyard, a deep-water harbour so named because Britain’s greatest naval hero was stationed there in the 1780s. 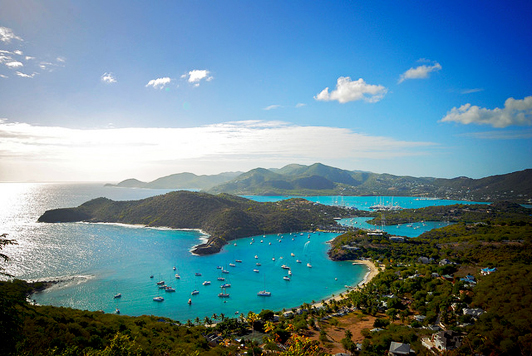 Nowadays the dockyard is a chic marina where sailors moor next to bars, museums, and hotels. It will take me two more hours to wend my way to its calm, cocooned confines. But not before I’ve had a beer, and a chance to gaze at the scenery. On Caribbean days that were not built for exercise, the trick is knowing when to call a halt.

Chris Leadbeater is a UK travel writer who has crossed the world in search of exciting destinations (and the beers available therein). He knows far too much about indie music.