Check out the top three videos of La Tomatina. 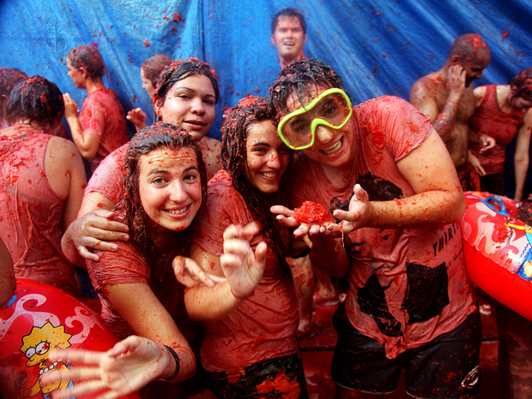 La Tomatina in Bunol is an annual festival in Spain.  Attracting visitors from around the world, the event has been declared a Fiesta of International Tourist Interest. Participants have one hour to unleash their inner child and engage in one of the most epic food fights ever. The city council dumps truckloads of tomatoes in the streets (In 2007 there were 115 tons!) and, once the festival begins, no one is safe.

The main event leading up to the food fight is known as the palo jabón. A greased pole is erected and a ham is placed on top of it. Then participants attempt to climb to the pole to reach the ham. Spectators sing, dance, and shower themselves with water waiting for a victor to toss the ham off the top of the pole. Once the ham falls, the horn sounds and the hour-long tomato fight begins. The fight usually starts around 11 am.

After the fight, firemen hose down the town while locals generously offer participants the use of their hoses to clean up. Some people also wash off in the pool of  los peñones. 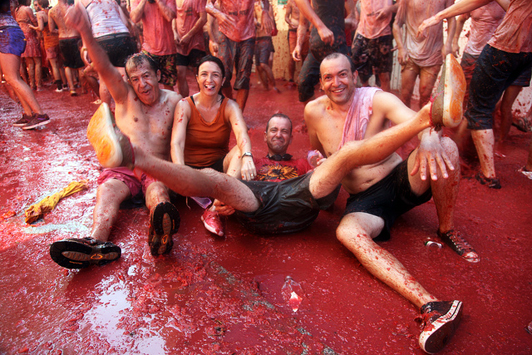 Want to Do Some Tomato Throwing in Spain?

La Tomatina takes place in the Valencian town of Bunol the last Wednesday of August around 11 am. It lasts for one hour.  Particpants should arrive at the festival around 8 am to ensure a good spot for taking in all the action. To get to the event, travelers can fly into Valencia and take a train or bus to the center of the city. Please note tickets into and out of the city should be booked well in advance due to the popularity of the tomato fight festival. A one-way ticket from Valencia to Bunol costs around $6.75 (€4.70) and takes about 45 minutes. Visitors should arrive at the Valencia San Isidre station around 6:30 am to catch the 7am train.

Due to the lack of accommodation in Bunol, it’s much easier to find a place to stay in Valencia. Hotel rooms should also be booked well in advance, as hotels tend to hike up their prices around this time. Hostel reservations can be easily made online you can check out these villas in Spain.

Other Tips: Make sure to bring goggles, wear clothes you don’t mind getting ripped or stained, and water-proof your camera! 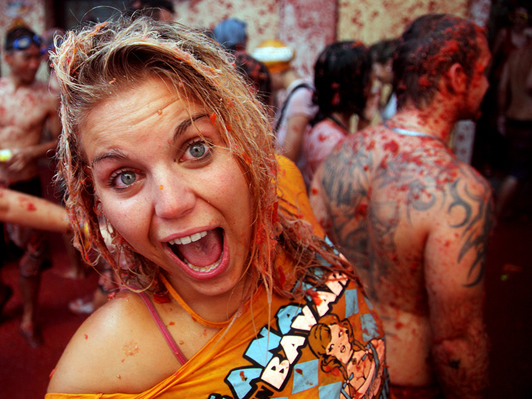 The origins of tomato throwing in Spain are a bit sketchy, but the original festival is said to have been started by some angry youths who began throwing tomatoes at their enemies one Wednesday afternoon in August, 1945. Though lawmakers arrived on the scene and put the kibosh on that fight, every year around the same time more and more people gathered to repeat the tomato war. The fight grew in popularity but was outlawed in the 1950’s. Due to pressure from the locals, the town council approved the fight again in 1959 with stipulation that tomato throwing could only begin with the sound of a horn and would cease when the horn sounded again. Since that time the fight risen in fame over the years. Copycat fights have also sprouted up in Columbia, Costa Rica, China, Chile, and Reno, Nevada.

Check out the top three videos of La Tomatina.