You are here: Home > Blog > Surfing for Scaredy Cats in Bocas del Toro

Do you ever get fed up of sitting on the sidelines watching other people have fun? Me too, so when I notice that happening I tend to do something about it.

I’ve done a lot of scary things in my life but some things are scarier than others. For example, not so long ago my husband and I sold our beautiful house on Waiheke Island in New Zealand, our profitable lifestyle business and most of our belongings and moved to Panama.

All of that would be scary in itself but our fears felt very real because we had never visited Panama, or anywhere in Central America before, we didn’t speak Spanish and we had three children, then aged two, five and eight to take with us and lo0k after.

We gave fear the finger and did it anyway because we were ready for a new adventure.

Before settling in Panama we wanted to check out the rest of Central America and make sure we’d chosen the right country to move to. We started our trip by travelling around Guatemala then we headed to Panama where we visited the Caribbean side and drove the Pacific Coast from Panama City to the border with Costa Rica.

But travel is hard work with kids. Much as we wanted to explore and see everything we could before settling down again, we also wanted to enjoy ourselves, chill out and really experience life in Central America, not just dash around seeing as much as we could.

So we decided to take some time out on the Bocas del Toro, a small island in the Caribbean Sea off Panama.

There we hired a house and didn’t just live like locals,we actually lived with them. Our home was a small three-bedroom bungalow built on stilts right over the water with neighbours crammed in on all sides. Definitely not kiddie safe but the Bocas locals seem to survive without any of the swimming pool safety and fencing regulations we have in Western countries and we did too.

We’d overcome many fears to get from New Zealand to Panama but once we got settled in Bocas del Toro one more dream started nagging at me.

For many years I’d been interested in surfing. Whenever we went to surf beaches in New Zealand or Australia I loved watching the surfers.

But I never did anything about learning to surf apart from think about it.

There was always an excuse, the main ones being that the water was too cold, I didn’t have time and I was too old to learn an adventure sport like surfing.

Now on Bocas del Toro the excuses sounded like the flimsy excuses they were.

The weather was balmy and the water was warm. The island is a mecca for surfers because of the warm water, the perfect waves and uncrowded surf breaks. Everywhere we went we saw surfers walking by carrying their surf boards, shops selling or hiring boards and Learn to Surf signs throughout the main town.

At 40 years old I suddenly realised that if I didn’t try surfing now I probably never would.

I still didn’t have time though because I had three children to look after and no school to send them too. So I hired a lovely Dutch backpacker to look after our three kids while me and my husband took surf lessons.

Sure I was worried about banging my head, scratching myself on the coral or worse. What if I actually died here in this remote place leaving my three children motherless?

I’d already shown how irresponsible I was by moving them half way across the world and this quest to learn to surf was surely following my personal dreams and desires too far.

We took our surf lessons with Jessica and Mike from Azucar Surf. Two beautiful people who had moved to Bocas del Toro to realise their own dream of surfing in uncrowded, tropical waters every day.

We practised “popping up” on the jetty before hopping in their boat and motoring out to a gentle surf break nearby.

With lots of gentle encouragement and a bit of pushing we were soon riding the waves and even standing up on a surfboard for the very first time. A thrill which you never tire of.

Panama turned out not to be the right place for us to settle so we moved to Costa Rica and live there for over a year. There I bought a surfboard of my own and committed to going surfing three times a week. Sometimes on my own, but more often with my new surf-loving friends and surfing is the best high there is.

If you want to learn to surf Bocas del Toro is a great place for it. Just make sure you get lessons from local professionals so you stay safe, feel confident and have as much fun as possible.

Life’s too short to sit around on the sidelines watching other people have fun. Whatever it is you want to do, no matter how scary it is, there’s no time like the present so take courage, jump into the water and paddle as fast as you can.

If you do that it’s just a matter of time before you catch your very first wave. 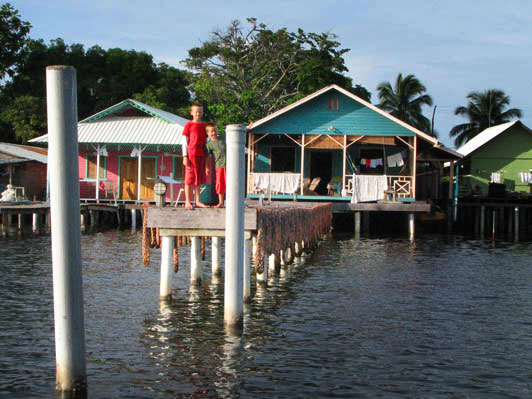 Annabel Candy is a freelance writer and web designer who has traveled to over 40 countries, lived in eight of them and holds both British and Kiwi passports. She’s now living in Australia, writing travel stories for Get In the Hot Spot and sharing blogging tips at Successful Blogging.

2 thoughts on “Surfing for Scaredy Cats in Bocas del Toro”