My high school friend Tyson got married last week. For his stag party we decided to go whitewater rafting on the St. Mary River. Our group consisted eight young small-town men, most of whom had known each other since high school. Planning was minimal. The trip was arranged a three days in advance, rides were hastily organized an hour before we were supposed to be at the rafting company’s office, which was a forty minute drive away, and not one person in the group had thought to eat lunch before the three-hour trip, which started at 1 pm.

It was just like the snowboarding trips we took in high school.

When we arrived there was a big old blue school bus parked in front of the company office. It was filled mostly with parents and children. 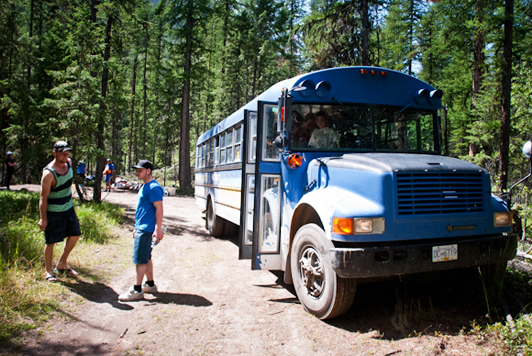 We hastily paid and boarded the bus. The driver, Craig, introduced our guides and explained what we would do during the trip. His speech was mechanical and peppered with tired puns, such as:

We arrived at the rafting site and were given helmets, lifejackets, and paddles. After a brief orientation, which included several more comedic interludes, the crowd separated and boarded the three rafts. 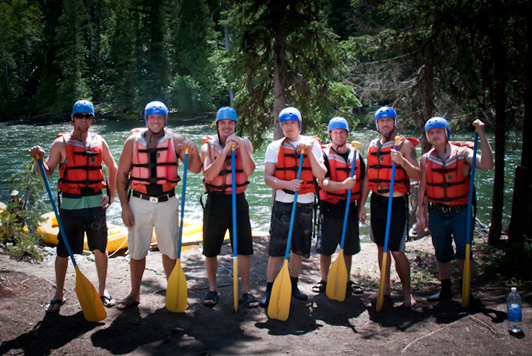 Fortunately, eight men were just enough to fill a raft, so we had one to ourselves. Our guide Jerad, also a youngish man, was obviously pleased about getting to pilot the raft filled with eight young men who may or may not have been drunk by noon.

He made some jokes about not bringing liquor on the raft and made references to plants of questionable legality that he suspected we might have been smoking before we arrived at the office. Those jokes, in contrast to the ones made earlier by his boss, were funny.

It was a good start. 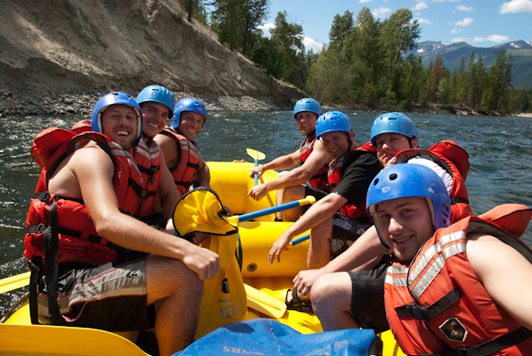 Tipping our boat involved us paddling full speed towards a relatively still pool of water. As we hit the slow pool of water he turned the raft hard to the left and everyone on the left side of the boat jumped over to the right side, causing the craft to capsize.

For medical reasons, one of our group, Adam, moved into a different raft before we capsized ours. He took my camera to photograph it. This is what it looked like.

The water was freezing!

To say the water was freezing really doesn’t explain for frigid it actually was. We were rafting on the St. Mary River at an elevation of about 1000 meters above sea level. The St. Mary river is fed by glaciers in the mountains above, which are at an approximate altitude of 1700 meters. It takes less than an hour to drive from the place we were rafting to the top of the St. Mary pass. Assuming that the river travels at the same speed as a car driving up the pass (which it doesn’t, the river is probably faster) much of the water that we willingly plunged ourselves into had likely been snow just a few hours earlier.

When we hit the water our chests tightened and jaws clenched.

It was sunny out, and after a few minutes in the raft we began to dry off and warm up.

We navigated some mild rapids and then pulled in to shore. The other rafters joined us there. We were told that we could walk up river and swim down the rapids if we wanted to.

Of course we did.

We waited until all the other rafters had jumped in the icy water, and then asked our guide if we could walk father up the river where the rapids were faster and jump in there.

Adam took my camera and photographed us again. This is what it looked like when I jumped in the frigid rapids.

About forty minutes later we arrived at the waiting bus. There were picnic tables with watermelon and drinks set out for us. We warmed up in the sun and discussed our next move. We were all starving and we had a barbeque and full coolers waiting for us at home.

We had not yet, as Jerad suspected, drunk any liquor or smoked any plants of questionable legality, but we would fix that very soon.

If you’re interested in booking a similar trip, here is the info for the company that we went rafting with:

We paid $69 CAN per person, but prices for different trips vary.