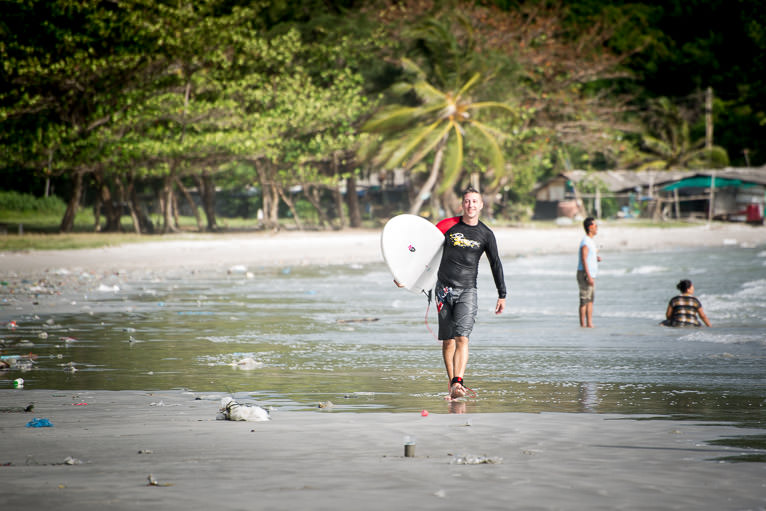 Spending more time surfing is not so much a New Year’s resolution as a lifelong goal. | Photo: Luigi Governi

This post was brought you by Overnight and the #ExploreMore project.

Yes, it’s another one of those ‘things I’m going to do in 2016’ blog posts. But, I think you’ll find this one different from most.

I have no complaints about 2015. It was one of the best years I’ve had in a long time. I started a marketing company, I spoke at several travel conferences and trade shows, I visited Bhutan, Dubai, Singapore, and Jasper, Alberta all for the first time, I starred in videos for Keen and Tourism Calgary, and I made more money than I ever have before in my life.

In the spring I said hello to a new nephew and then moved to Thailand and bought a surfboard. The picture at the top of this post is the beach across the street from my condo.

There’s one thing you should know about me; I don’t make New Year’s resolutions.

I think making changes to your life because the earth has circled the sun and reached a start/finish line that was chosen more-or-less at random is arbitrary and, frankly, silly.

But, this is a time of year when people are interested in talking about goals, so I thought I’d tell you about mine.

My priorities have changed greatly over the past few years. I spent two years living with my ex-girlfriend caring for her sister, Norie, who was dying of cancer. That was sad and terrible experience, but it also taught me a lot about what’s important in life.

This spring, after a long struggle with a failing heart, my father died.

These deaths made me to reexamine my life and reorganize my priorities, and last year I chose to make several changes to the way I spend my finite time on this wet little rock as it hurtles through space on yet another oval loop around the sun.

Making a change is not the same as making the decision to change. Changes take time and are usually achieved step-by-step — not in one fell swoop. My goals for 2016 aren’t New Year’s resolutions. My goals for 2016 are goals that I made in 2015 that I want to continue working toward in 2016.

I travel a lot for work, which is awesome, but also time-consuming. This year I also started an online marketing company, which is also requires an enormous amount of time.

Between travel and the work of getting my company up and running, I often feel like I’m struggling to check items of an every-growing to-do list. When I feel that way, I tend to get tunnel vision,and focus solely on work at the expense of everything else.

I’ll sit at my computer all day, every day, taking only short breaks to eat or exercise.

It’s very easy to anyone — especially entrepreneurs — to get caught up in chasing business goals at the expense of their physical, mental, and spiritual health.

I am becoming increasingly conscious of this imbalance and am setting goals to make sure I don’t allow work to take over my life to an unhealthy extent.

So, I’ve taken the#ExploreMore2016 pledge, to make some simple changes, like

When I talk about exploring, I’m not talking about traveling to another country. You can explore anywhere. I’ve had my condo in Thailand for almost 6 months now, and I haven’t yet ridden my bike more than 20km down the highway and there’s very climbable mountain just a few kilometers away that I’ve had my eye on ever since I moved there.

If I can’t make the time to do those things for myself, then I’m doing something wrong.

Join me and thousands of others and take the #ExploreMore2016 pledge now.

Since I moved to Thailand I’ve been doing well on this one — partly because I structured my life around this goal. I live across the street from a beautiful beach. I love jogging and swimming, so every day, regardless of how work is going, I make stop and go to the beach at sunset for a swim, or a jog, or to just get outside.

I also bought a mountain bike, rather than a scooter or motorcycle, for transportation. This forces me to bike 40 minutes to the grocery store any time I want to go shopping.

To me, time outside, is therapy. I used to work as a tree planter and was outside literally all day, every day. I know that I’ll never be satiate my desire to be outside. So, I’d like to continue to find ways to spend more and more time outside. This is not so much a goal, as an ongoing quality-of-life project.

3) Spend More Time With My Family

My experiences with my Norie and my father strongly reinforced the importance of family to me, and highlighted the limited time that I will have to spend with mine.

I’m very luck to have a family that gets along well. We haven’t always been that way, but we are now. Over the past few years I have gradually started spending more time chatting on Facebook, talking on Skype, and physically traveling home to visit, each year.

I’d like to continue making a conscious effort to spend even more time with — or talking with — my family in 2016.

A lot of my goals listed above are to spend more time doing things. But, my days are already very full. So, I’ll have to find that extra time somewhere. This is where I’d like to borrow it from.

Drinking doesn’t necessarily take up an enormous amount of time. But getting drunk and spending the following day nursing a crippling hangover — which at 37 is becoming frighteningly easy to do — is an incredible waste of time.

As much as I like you alcohol, we’re going to have to start spending more time apart.

I’ve spent most of my adult life pursuing my first passion: writing. But, it’s not a good time to be a writer. Publications are struggling and the industry’s future is uncertain. Wages have been falling for decades.

So, despite having achieved a fair level of  success as a professional writer, I had to scramble and work long hours to make a decent living. The stress of that lifestyle and the necessity of churning out boring, lifeless articles sucked all the joy out of writing for me. So I decided that I would earn my living doing something more lucrative, and get back to writing for myself — rather than a paycheck — again.

I also realized that I wanted to have more money. I don’t really care so much about earning more money for myself. I’m happy with my lifestyle and I already earn more than I spend.

But during the crises of the past several years I learned that — although money can’t buy happiness — it can make a terrible situation more comfortable.

When my girlfriend and I moved to Silicon Valley to care for her sister, I wish I could have rented us an apartment, but in a valley famous for having some of the most expensive real estate in the world, that wasn’t an option.

I wish that I could have sent my father to all the places he wanted to travel in his final years. We all knew he had limited time left, and I’d have loved to see him make the most of it. But instead he spent much of it in his one-bedroom apartment in my hometown. I was frustrated I couldn’t do more to make his final days joyful.

So, this year, I started Xpat.Media to provide blogging and social media marketing training and consultling services to businesses. Although I only started the business 8 months ago — and spent two of those months with my sick father — the business has been growing quickly.

If it continues on this trajectory, I think it’s would be possible my income (currently around $3000-5000 per month) in 2016. If I am able to do that, and grow my savings, then next time there’s a crisis I’ll be better equipped to handle it.

As I mentioned in #5, I chose to stop writing as my main income and start a marketing company instead. I was desperately sick of churning out cookie cutter articles. I spent so much time writing articles that bored me that I rarely had any time or creative energy left to work on stories that I was passionate about.

By starting my company I knew I’d be making a change that would afford me less time to write, but would also allow me more time to focus on writing that I liked.

That includes getting back to work on my long-abandoned novel.

I’ve always wanted to be a writer, but I never intended to become a travel writer. I wanted to write short stories and novels.

Writing a novel is the one thing I’ve always wanted to do, but never allowed myself to do.

Is there anything you’ve always wanted to do, but haven’t given yourself the chance? If so, can you do it in 2016?

Matt Gibson is a professional writer and award-winning photographer, the Outbound President of the Professional Travel Bloggers Association, and CEO of UpThink, a digital marketing agency that specializes in content, community building, and influencer marketing.
View all posts by Matt →
The Best Cities for Expats in Australia
5 Places I Have To Visit In 2016