Driving the Roads of South America

You are here: Home > Blog > Driving the Roads of South America

South America could truly be called one of world’s last remaining frontiers.  The geography ranges from the ultra-modern comforts of Buenos Aires to indigenous tribes that remain completely untouched by modern civilization.  Its road system reflects the same diversity.

Latin America in general doesn’t have a lot of super-highways.  Except for the broad avenues of the cities, most highways are two-lane affairs.  Repair work is inconsistent. In sun baked areas, large cracks appear, widening out with rains so that dips, holes, and gravel stretches are common.

In the rainforest, conditions can be much worse.  Frequent rains wash away the sides of the roads, avalanches are common, and flash floods wash away sections of road.  Anywhere you travel in South America, it is recommended that you drive a vehicle with high clearance. 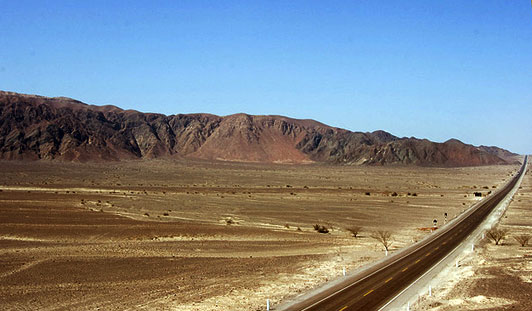 Don’t kid yourself with the use of the word, “highway”.  Highway is a very loose term in South America, and the Pan America is probably the loosest use of the term of all.  The forty thousand mile route actually begins in Prudhoe Bay, Alaska, where it’s a barely a truck driver’s trail, and reaches its final destination in Argentina.  Its upkeep depends on on the individual countries it passes through, which means that, in some cases, little maintenance is done at all.  Despite the uneven care of the road, with the exception of one region — the Darien Gap — the highway is navigable by motorized vehicles.

The Darien Gap is a ninety-nine mile long stretch between Panama and Colombia.  On the Panamanian side, the Pan American Highway winds through heavy marshes and undeveloped swamp lands.  On the Colombian side, it changes sharply into rain forest and steep mountain passes.  It can be crossed with a four wheel drive, but attempts to pave the road have been met with sharp criticism, as the ecological structure is delicate.

Asphalt is very damaging to marshlands, and in rain forests, there is an additional challenge.  Rain forest vegetation grows very quickly.  In areas where roads have been paved, new plant life pushes up through cracks and begins taking over the edges of the road within a year.  Any road through the Darien Gap would be expensive and difficult to maintain.

In recent years, motorists have been advised not to attempt to drive the Darien Gap, not so much because of the lack of road, but because of insect borne diseases, highway robbers, assassins, and rebel troops belonging to the Revolutionary Armed Forces of Colombia (FARC).  The FARC rebels exist on both sides of the Panama Border and have been accused of kidnapping’s, murders and human rights violations. 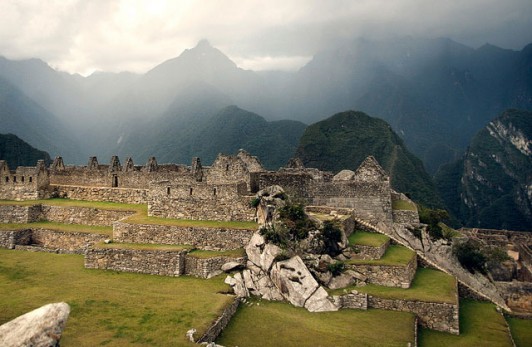 Nearly everyone is familiar Machu Picchu, the most famous Inca Ruins in the world.  Located nearly eight thousand feet above sea level in the Cusco region of Peru, it is a dazzling display of dry stone wall buildings set into a mountain wall with peaks piercing the skyline. Despite its location, and being marked by towering precipices and deep valley gorges, it attracts over two thousand visitors a day.  In the meantime, other incredible ancient sites, dating back thousands of years, are virtually ignored.

It would be difficult to say what Peru is most famous for; the ancient ruins scattered throughout the mountainous countryside, or the roads you have to navigate to get to them.  The roads are nearly all unpaved, narrow pathways following routes more suited to travel on foot than motorized vehicle.

Traffic accidents in Peru cause thirty deaths for every 100,000 vehicles, compared to one in every 100,000 in the United States.  This is blamed in part on aggressive Peruvian drivers, as well as poor lighting conditions, and poorly maintained roads.

Peru is dominated by the Andes, the longest mountain range in the world.  Here you can find the remains of a mysterious civilization, known as “the cloud people”. There are also deep valleys, high desert plateaus, and staggering mountain-tops peering over lush forests.  The Andes is the home to over thirty volcanos.  Among them is Cotapaxi, which, at 19,347 feet, is the world’s tallest active volcano.  In Peru, the land is semi-arid and characterized by high altitude plains known as puna or altiplano.

The Most Dangerous Road in the World 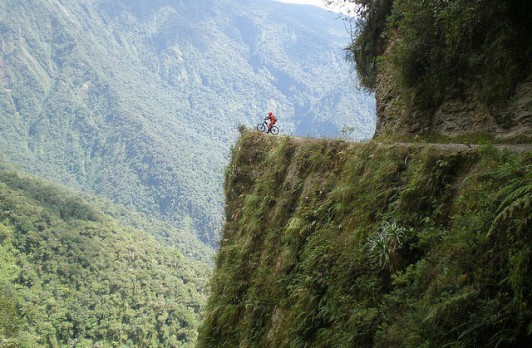 Bolivia holds the dubious distinction of having the most dangerous road in the world.  The thirty-eight mile stretch, officially called the Yungas Road or the Corico Road, is known unofficially in all languages as Death Road.  This narrow, unpaved route cuts into the sides of towering cliffs, with a solid rock wall on one side and an 1,800 drop on the other.  If that isn’t harrowing enough, frequent landslides cover the road and thick morning mists often obstruct the view.  During the rainy season, the rock slides turn into mud slides and water run-offs become waterfalls.

The rules for driving on the Death Road is that the person driving uphill has the right-of-way.  The person driving downhill must either pull over and stop for the uphill driver or back up until he finds a pullover spot.  Even though driving in Bolivia is usually done on the right-hand side of the road, on the Yungas Road, driving is done on the left. This is to improve visibility around the sharp, hairpin corners.

In recent years, a newer, wider road has been constructed and paved, offering motorists a safer journey from the altiplano of La Paz into the tropical rainforest of Corico, but the old route continues to be used by daredevils everywhere who want to say that they’ve driven on the most dangerous road in the world.

Karla Fetrow is an experienced off-road driver who drives some of the toughest terrain in the U.S in Alaska on a daily basis.

Every week we hand-pick the best deals from around the web and deliver you up to 80% off your favorite brands like Patagonia, North Face, and Arc'teryx
Tweet
Pin
Share3
3 Shares

4 thoughts on “Driving the Roads of South America”