Which of these extremely different death-defying climbing videos is more insane?

You are here: Home > Blog > Which of these extremely different death-defying climbing videos is more insane? 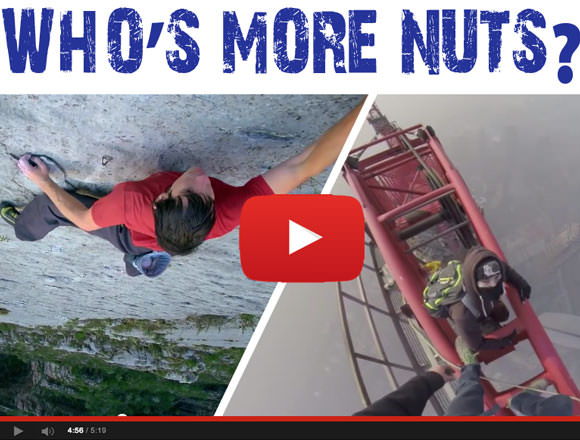 In the past two days I watched the two most nauseatingly insane free-climbing videos that I’ve ever seen, and they couldn’t be more different.

The first is an amateurish production made by two Russian structure climbers who break in to, and climb, the second tallest building in the world in Shanghai. The footage is simple, shot from GoPro cameras on the climbers’ heads. The effect, though, is an extremely intense as they ascend above the clouds.

The second is a manicured production documenting Alex Honnold — who is according to many the best (if not the most fearless) free climber in history — ascending El Sendero Luminoso without any ropes and completing what some are calling the most difficult free-climb in history.

These videos couldn’t be more different. The first is amateur done with no budget, the second professional complete with ariel shots. The first is urban, the second is alpine. One is obviously more legal than the other.

Personally, I found the first, with it’s raw POV footage to be more scary. My stomach felt like it had dropped out of my body. But, I wouldn’t want to detract from the epicness of the second.

Which one do you think is more thrilling?

2) The (Arguably) Hardest Free-Solo in History

Which video did you like better? Which climber was more insane?

5 thoughts on “Which of these extremely different death-defying climbing videos is more insane?”