You are here: Home > Blog > Indoor Surfing on the Flowrider 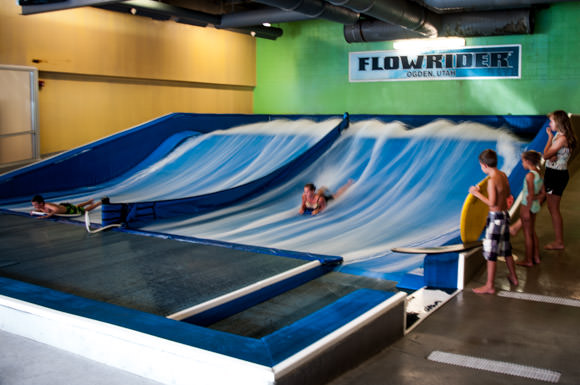 Technology has advanced sports in ways that few people could have imagined. Snowboard designs were applied to skis, resulting in the forgiving fat skis that are so popular now. Paragliding technology was combined with wake boarding technology resulting in kitesurfing. You can even ski in the most unlikely of places — like Dubai — thanks to technological advances.

I started surfing a few years ago while living in Taiwan. I suck horribly, but love it. So, after two desert-bound years in Utah, I was ready to try anything. I started asking around about whether there were any standing waves in nearby rivers that could be surfed. That’s when I first heard about Flowrider.

Flowrider is another of those surprising technological advancements that came out of nowhere and took a well-known sport in an unexpected direction. Flowrider is the brainchild of Tom Lochtefeld. It’s basically a giant franken-wave for indoor boogieboarding and surfing.

There are several models that replicate everything from barrel waves to reef breaks. The model that I rode at the facility in Ogden — about an hour’s drive north of Salt Lake City — was a tamer model that simply creates a nicely-shaped standing wave.

The Flowrider double, which I rode, mimics a standing wave by firing a steady stream of water about six inches deep over a smooth wave-shaped bottom. The riding surface is about 32 ft (9.8m) wide and 54 ft (16.5m) long. A 240hp motor propels 221,000 liters of water over the shaped bottom at a high velocity, mimicking the movement of water in a large wave.

You can boogie board on a Flowrider like you would on a normal wave. Surfing, however, is a different story. The water is too shallow to ride a surfboard with fins on it, so riders are given a board that’s similar in shape to a twin-tip skateboard, but is about three feet long.

Surfing on the Flowrider is not exactly like surfing on a wave, but it’s excellent practice for learning balance, the feel of the water rushing beneath you, and the subtleties of turning on a board that you’re not strapped into.

It’s also not easy.  In eight or nine attempts that I made during my one-hour session, I was never able to stay standing for more than ten seconds (there’s a sweet video of me falling at the end of this post). However, by the end I was more stable and standing for longer. I think that after another hour I would have gotten the hang of it much better.

Nothing can replace the surfing experience. Paddling out through the break, sitting on the waves in the sun watching the sets come in, and the feeling of catching a wave in the perfect spot are all impossible to recreate.

But, we can’t all be near a break all the time, and Flowrider is definitely a good way to satisfy the beast in the meantime.

Watch Me Wipe Out on the Flowrider

Every week we hand-pick the best deals from around the web and deliver you up to 80% off your favorite brands like Patagonia, North Face, and Arc'teryx
Tweet
Pin34
Share
34 Shares

8 thoughts on “Indoor Surfing on the Flowrider”