You are here: Home > Blog > Is Telluride The Best in the West? 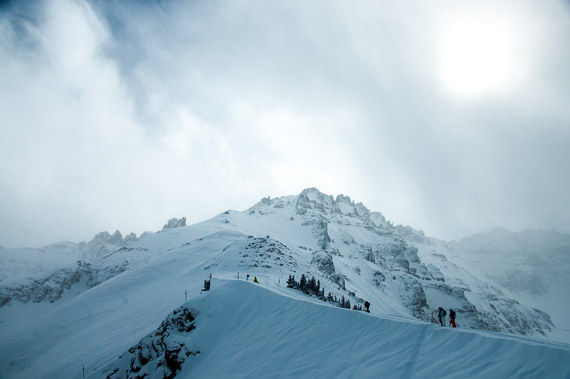 Telluride has always held a certain mystique for me. Growing up we watched ski and snowboard videos every year in the months before the snow fell, while dreaming of the winter to come.  I lived in a small town in British Columbia. The exotic names of the ski resorts we saw always got jumbled together, Vail, Squaw Valley, Chamonix, but one always stood out — Telluride.

I don’t know why, but it seemed that Telluride held a special place in the hearts of the narrators on the television. It was always spoken of with a particular reverence. When I finally visited, I found out why.

Mountains surround the town on three sides. Without a serious four-wheel drive vehicle and intimate knowledge of the back roads, there is only one road in and one road out. The ski runs rub up against one side of the town so that any resident can walk to a ski lift in around fifteen minutes.

Telluride is a small town in a box canyon at the end of highway 145. It’s a town with an anti-establishment tradition that started when Butch Cassidy staged his first robbery at the San Miguel Valley Bank and continued when hippies flocked there in the sixties. At one point, there was a serious movement to ban cars. These days, when the moon is full and the snow is deep, locals gather at a cabin in the bottom of a valley north of the resort. They drink, play music, and then hike up the broad pristine slope. Telluride backwoods counterculture is like none other.

My trip to Telluride lived up to the legend. My days on the hill were filled with steeps and powder and our nights were spent in local halls dancing to funk with grizzly-bearded hiking booted locals.

On paper, Telluride is not as big as some other ski areas. It also doesn’t get as much snow. But acres and inches are not a measure of history, culture, and passion.

Telluride, no doubt, is one of the purest ski areas in the West.

Do you think Telluride could be the best ski resort in the USA?

2 thoughts on “Is Telluride The Best in the West?”