We live in a society of excess. On television and the Internet everything needs to be bigger, stronger, faster, and have extra cheese. Even the most mundane house chores have been made extreme. Just look at the league of extreme ironing.

The relaxing Scottish sport over which businessmen make deals and get drunk on Sundays is certainly not exempt. Man’s desire to take everything ‘to the next level’ has resulted in several golf courses so extreme that, quite frankly, I’d be afraid to play on them.

If you came here looking for a nice place to play a few holes, I suggest you visit www.arizonagolf.com or some other boring plaid-and-cleats website. This post is about three golf courses that few people have the balls to play on (pun intended).

The Third Most Extreme Golf Course in the World: Uummannaq, Greenland 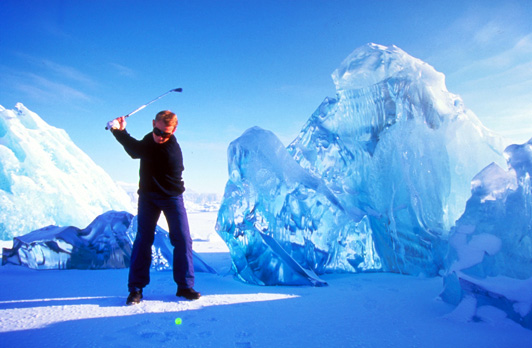 Located 590km North of the arctic circle, Uummannaq is frigid, barren, isolated, and has been home to the World Ice Golf Championships since 1997. This town of 1300 is in fact so far north that the local children believe they know which bay on the island Santa Claus lives in. The average winter temperature there is around -17°C. In June and July it peaks at a smouldering 7°C.

This golf course has a backdrop of glaciers and icebergs and the “green” (sometimes called the “white”) is cut away just days before the event. Physical and mental preparedness are essential for playing this course. With windchill, the temperature can drop to -50°C. The scenery, however, is spectacular.

Graphite clubs are not recommended, as they tend to shatter in the extreme cold.

The Second Most Extreme Golf Course in the World: Coober Pedy, Australia 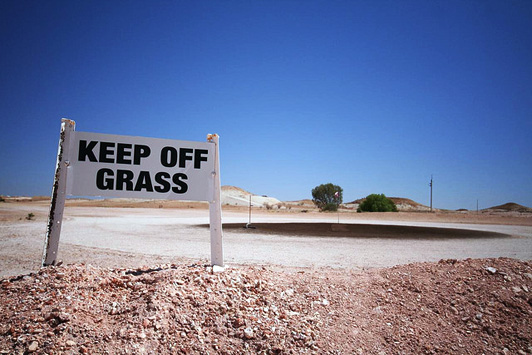 At the opposite end of the spectrum is Coober Pedy. This town of about 2000 is famous for several quirks. It’s known as the “opal capital of the world” for the quantity of opals that are mined there. It’s also known for the desert-like environment and extreme heat, which has forced residents to live underground and in caves rather than houses. In fact, the name Coober Pedy comes from the local aboriginal phrase for “white man’s hole”.

Nothing grows here. The town has but one tree, and it was made out of scrap metal and erected on a hill by a local. Thus, Coober Pedy is home to the only golf course in the world where you carry your own turf with you.

Because of the extreme daytime temperatures (temperatures have been known to reach highs as extreme as 47°C) this course is usually played at night using glowing balls.

The Most Extreme Golf Course in the World: Camp Bonifas, South Korea 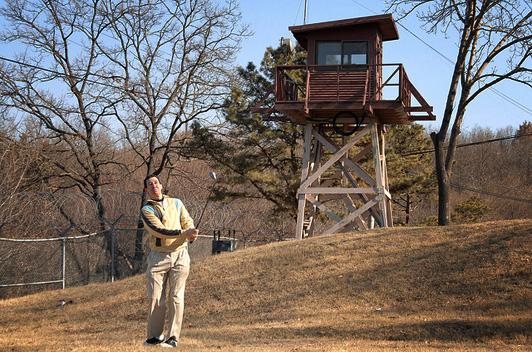 Those other golf courses may be extreme, but this one takes the cake. Dubbed by Sports Illustrated magazine “the most dangerous golf course in the world”, this single-hole par 3 course is located beside a United Nations Command military post on the South Korean side of the Korean Demilitarized Zone (the ever-tense heavily-guarded border between North and South Korea).

Formerly called Camp Kitty Hawk, the base was renamed to commemorate US Army Captain Arthur G. Bonifas who was killed nearby by North Korean soldiers in what is now called the “Axe Murder Incident”.

However short, this course is exciting—partly because it is surrounded by land mines. The reporter from Sports Illustrated who played it actually set one off with a stray shot.

Have you ever played any of these courses? Do you know of any others that belong on this list?

9 Responses to The World’s Most Extreme Golf Courses