You are here: Home > Blog > Climbing Kilimanjaro Through New Eyes

When I first met Brad, we were both normal seven year old kids. I took to his adventurous playground antics and we quickly became friends. The first two years of our friendship were like those of any two boys.

Then one day Brad started complaining about his eyesight. He struggled to keep up with us in sports and couldn’t see the whiteboard in class. He soon moved to a new ‘special’ school. Brad had a condition called macular degeneration. His central vision had deteriorated to 10% of a normal person’s eyesight and his peripheral vision was impaired.

He was effectively blind.

His condition never broke his spirit, though, and despite his awful eyesight he continued to play squash, golf, and snooker (and excelled in the latter).

Over the years we went on a number of sailing and climbing adventures. 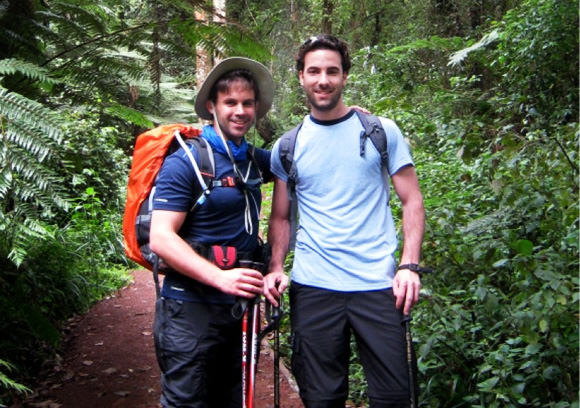 Brad went pushed himself extra hard to succeed at activities that people with perfect eyesight would struggle to excel in and, over time, this made me forget just how limited his sight was. His determination to be active and ‘normal’ made me discount his disability and assume he could do anything that he wanted to.

So, when Brad told me he wanted to climb Kilimanjaro I was game.

At the time I was living in London and he in South Africa, so we met in Nairobi and flew together to Kilimanjaro International Airport.

In Moshi we got our first glimpse of the awe-inspiring Mount Kilimanjaro. Seeing any great mountain for the first time and realizing that you plan to drag yourself to the top of it is a frightening and seductive feeling.

We began our trek the following day following the popular Mâchame route that sojourns through dense tropical rainforest. The paths on Kilimanjaro are surprisingly good and make for relatively easy going hiking.

The biggest challenge is the altitude. The human body is not meant to function at extreme altitudes and responds to the unfriendly environment in various ways, starting with mild headaches that can turn into severe migraines and nausea.

As you climb in altitude the air pressure drops lowering the air density and reducing the number of oxygen molecules available per breath. At around 12,000 feet (3,600 meters) there are approximately 40% fewer oxygen molecules per breath than at sea level. The human body is able to acclimatize to this change, but it does so slowly.

Unfortunately, Kili doesn’t give the average trekker much time to acclimatize. So, the onset of mild or moderate Acute Mountain Sickness (AMS) is common and summit success rates are relatively low on certain routes. Death from severe AMS and its Edema complications also occur on Kilimanjaro. 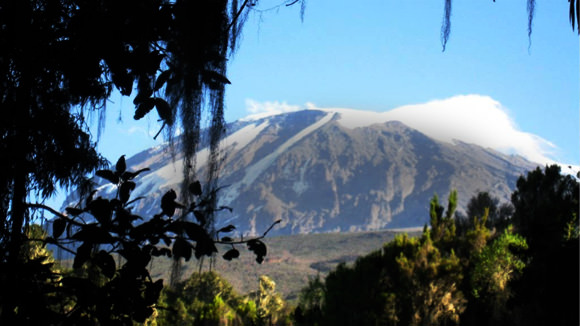 Like most sane trekkers, Brad and I had valued our lives more than making it to the summit, but we were prepared ourselves to endure mild headaches and even vomiting (fortunately the latter never happened).

I was the first to come down with AMS symptoms on day four. Brad, despite his eyesight, had been having an easy time on the climb.

We reached the summit base camp, Barafu (which means ice in Swahili). As the name implies, it is not warm on the exposed plateau, which sits at 4,600 meters. Nausea had overcome me and I stopped eating. Brad smugly ate my dinner while all I could do was watch and try not to vomit.
That evening we prepared for the final push. We would be woken at 23:45 to begin our summit assault on the slopes of Kibo. A gale force wind blew all night long, making sleep impossible. We thought that that surely no one in their right mind would try summit in this wind.

We were wrong. Wind or no wind, we were pushing on. The good news was that I was feeling a lot better. Apparently starvation and sleep deprivation help to alleviate altitude sickness (though I wouldn’t recommend trying it).

Brad had taken a turn for the worse. Half way up Kibo started complaining that his heart was beating rapidly. Like a good manly friend, I ignored his complaints and continued to kick his ass up the winding slope, majestically flattened at a crater rim to reveal the sub-summit milestone, Stellar Point.

Many people stop here, exhausted and and defeated when they realise that they have to complete another hour’s trek around the crater to Uhuru Peak and the summit of Kilimanjaro. 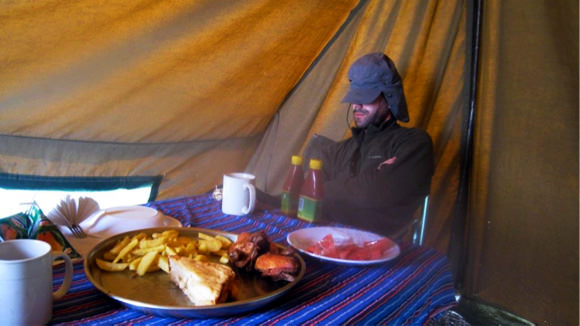 Brad nearly joined the ranks of those who pack it in at Stellar, but after a cup of hot chocolate his spirits brightened and, as the morning sun rose out of the African landscape, we continued on toward the summit.

After 5 days of trekking, headaches, long drops. and baby-wipe baths, the feeling of reaching the summit is sublime however short lived. A few congratulatory high fives and customary photos are standard; however, the knowledge of richer air waiting below makes departure from the summit even sweeter.

Mount Kilimanjaro is a dormant volcano. The main peak, Uhuru, is adorned with large receding glaciers that have left the slopes covered with fine volcanic glacial scree. Descent on the upper regions can effectively be done by sliding snowboard-style down the scree to base camp where the landscapes becomes rocky again.

The problem with fine glacial scree — as I learned in the worst possible way — is that it becomes easily lodged in one’s eye. By the time I reached Barafu my right eye was partially closed and left eye was completely shut.

I fell asleep exhausted and partially blind. How the tables had turned! 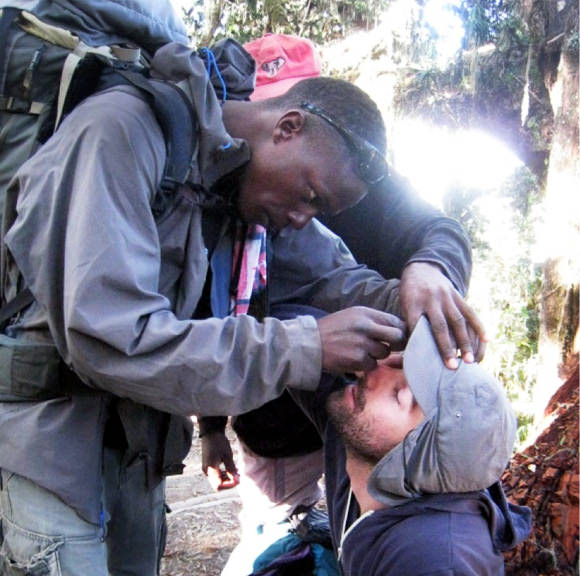 The following morning Brad, with 10% vision, helped me down the final stretches of Mount Kilimanjaro and for the first time in 20 years of knowing him I got a small glimpse of the challenges he faces living with limited eye site.

To climb Kilimanjaro is a great feat, but it was only on our final day as we left the trailhead for of Kilimanjaro l gained a deep respect the extraordinary determination and spirit that my friend had to develop to overcome his limited vision and a life that I, with normal vision, take for granted.

Have any questions about climbing Kilimanjaro? Just comment comment below and Mark will  be happy answer them.