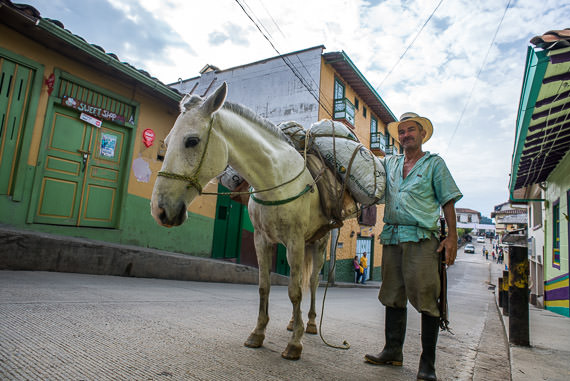 A few weeks ago, after reading a Buzzfeed article about people’s bad roommate experiences of all things, I decided that I wanted to compile an article of peoples’ most poignant travel experiences, whether they were funny, scary, or sentimental.

The results were way better than I expected, so now I think I may do a series (if you’d like to contribute a story, there’s info at the end of the post).

When traveling through Bolivia I signed up for a 3-day 4×4 tour through the Soleli Desert to visit the Uyuni Salt Flats. The truck was full, so I sat in the front seat beside our driver, who spoke only Spanish. Although it was cold outside, the sun made it unbearably hot inside the truck.

Sweating, I looked over at the driver and said, “Estoy caliente (I’m hot).”

Instead of turning on the air conditioning, the driver looked at me in horror and confusion. I repeated myself, unsure of why he was acting so strange and would not turn on the A/C.

After a few uncomfortable moments a bilingual passenger in the back spoke up. “I think you’re trying to tell him you’re hot, but you just told him you’re horny…twice.”

The rest of that 8-hour car ride was pretty awkward.

By Jessie Festa of Jessie on a Journey and Epicure & Culture

A sunset cruise on the Zambezi River was to be one highlight of my stay at Victoria Falls. The small boat holding 6 people was almost full as I gamely darted across the narrow wooden gangplank.

Suddenly, the boards broke under my feet.

I shouted for rescue while my fellow passengers remained frozen with shock. About to take a dunking, I was pulled to safety at the last second.

Only after I was safely on board did I see that I would have fallen in the water right where the fishermen had been throwing bait to waiting group of enthusiastic crocodiles.

By Elizabeth Avery of Solo Trekker 4 U

After about 10 days of driving and flying my right shoulder and neck hurt badly. I was dreading the final leg home. As I stood at the gate at the Philadelphia airport I noticed a small booth selling spa items. Among them was a small massager. I thought that the massager would help to work out the tension in my shoulder and neck and used it on the flight (totally oblivious to the curiosity of the gentleman sitting next to me).

After the flight I forgot about the massager. Several days later, I was checking out of the hotel room early in the morning before a conference. As I rushed out of the hotel room my carry-on bag started to vibrate. The elevator dinged and I decided it was better to get to catch it than to worry about the noise in my bag. What I had not anticipated was the stares I’d receive from the other people in the elevator as I pretended not to notice my vibrating luggage.

This Is What Happens When You Talk To Strangers

My friend and I were finishing a two-week trip to the USA and we’d just flown from Las Vegas to Los Angeles, where we were to catch our flight home the following morning. While collecting our luggage we struck up a conversation with the man who’d sat in front of us during the flight. When we told him that we’d be spending our last night in the States at an airport motel eating take-out, he invited us to dinner.

We were both girls in our mid twenties. He was a businessmen, probably just a few years older than us. On our way to his car our new friend made a call. We heard him ask about a room and then giving a credit card number. When he put his phone down, he told us that he’d booked us a room at the Sheraton LAX.

We began wondering if we made the right decision going with him.

I don’t want it too sound negative as we never were really worried or something like that.

We had dinner at a bar in Manhattan beach – which he paid for – and some drinks at another bar afterwards – which he also paid for. He seemed like a great guy, but all night long my friend and I couldn’t help but think that he’d expect something afterward in exchange for all of his kindness.

When he drove us to our hotel (well, actually he let my friend drive because she really liked his jeep) we braced ourselves for the come-on. But, when we got to the lobby we simply thanked him for a wonderful night and said goodbye. That was it. No dirty attempts. No hints of something more.

He just wanted to treat us to a great last night in the USA, and he did.

By Sofie Couwenbergh of Wonderful Wanderings

In 2006 I was on a study tour in Israel and Palestine and we had been meeting with Palestinian Authority leaders in Ramallah, The West Bank. While our the bus waiting to cross back in to Israel we were told that that Ariel Sharon had a stroke. The border was closing, our bus was stuck in traffic, and we weren’t going to make it back. Our professor told us to get out find the border crossing on our own, on foot, while he stayed with the bus.

Stumbling in the darkness along the bombed-out “wall” while listening to the wail of sirens was pretty scary. When we finally found the border crossing I tried to keep it together watching the teenage Israeli soldiers armed with Galil guns inspect women adorned in full burkas (we had just been told that was a popular suicide bombing outfit).

It was one of the most terrifying experiences of my life.

A Real Close Call in Rio

Before traveling solo in Rio de Janeiro, Brazil, I had been warned numerous times not to pull out any money or valuables in public. I was cautious during my trip, but one day while waiting for the bus I slipped up and pulled out my wallet to look for some small bills before the bus had arrived.

A local man with menacing eyes stopped in his tracks, glared at me, and started walking briskly toward me. There was no disguising what he wanted.

There was almost nobody around — just one group of four local women chatting nearby.

I walked quickly into their group, smiling and waving as if I knew them. They spoke only Portuguese and I spoke only English, but they realized the situation and allowed me into their circle.

By Jessie Festa of Jessie on a Journey and Epicure & Culture

One day on my first backpacking trip through Australia I suddenly realized that I was running very low on money. The next day I met a camera man who offered me a job as an extra in a movie. It was only $40 a day, but my options were limited.

After we finished filming he asked if I was interested in some more work. Of course, I said yes, but the next job turned out it ton be in an arty nudist movie.

There was no way was I getting naked for cash.

Ok, so maybe I would get naked for cash.

Two days later me and 4 backpacker buddies spent 5 hours at a naked house party — complete with naked bartenders and fire dancers — drinking mojitos, having a blast, and making an easy $500.

I typed this story on the iPad it helped me to buy.

By Chris Stevens of Backpacker Banter

A friend and I were scuba diving about 150km off the Australian coast at Osprey Reef when I spotted an enormous shark coming toward us. My dive buddy was confused by my attempts to mime ‘shark’ underwater and didn’t even see the giant as it swam just metres from his head.

I did, however, manage to snap this photo of my confused friend as the beast swam away. 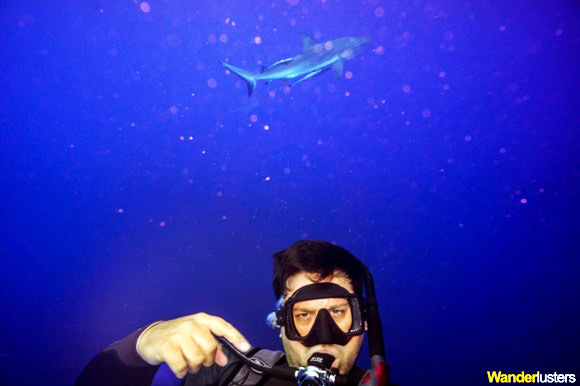 By Charli Moore of Wanderlusters

I relied a lot on Couchsurfing to save money while backpacking through Europe. Halfway through my trip I made plans to stay with a Couchsurfing host in Budapest. I was excited because she had a cat and — missing my own two cats — I was in desperate need of feline company.

A few days before I arrived in Budapest my host emailed me to say that she had to leave the city for a family emergency. She lived alone, so I expected that I’d have to find a new host.

I was floored when she told me that one of her friends would meet me at the station to give me the keys to her house! I had only met this girl online, and we’d only exchanged a few emails, but she trusted me with her house, all her possessions, and her beloved cat.

Her gracious hospitality was the highlight of my trip.

By Aleah Taboclaon of Solitary Wanderer

A Rare Glimpse Into A World Few People See

It started off like any other night in Shibuya, having a few beers at a local watering hole. After a while we struck up conversation with a few Japanese locals. One guy started showing me photos of himself with Hugh Hefner and the bunnies, famous actors, and the guy who owns Orange County Choppers in New York.

Over the new few weeks this guy took me to VIP parties, to clubs (through the back door, never waiting in line), to eat sushi off naked women, and to dine in some of Tokyo’s most amazing restaurants (restaurants that no gaijin — foreigner — would ever have been allowed to enter unescorted).

I didn’t realize he was Yakuza (a member of the biggest and most powerful organized crime circle in Japan), but it was obvious to my Japanese girlfriend the moment she met him.

I probably should have known too, given the fact that people would bow subserviently to him everywhere we went.

By Derek Freal of The Holidaze

Have you had a unique, funny, or moving travel experience that can be summarized in a paragraph or two?

I’d love to hear it!

Use this contact form or email me directly at xpatmatt (at) gmail (dot) com to be included in the next Super Short Travel Stories.