“You should have brought better boots.” Jeremy informed me at the base of the glacier. “Kicking footholds in the snow is going to kill your toes.” He was wearing stiff leather hiking boots. I was wearing a pair of synthetic sport hiking shoes.

When Jeremy told me that we were going to hike up a glacier and down the cave that a river had carved through it, I thought it would be an easy hike. I had been on several glaciers before, and they had all been reasonably flat. This one was much steeper.

“I thought you said you hiked this with your little brother and sister before.”

We had no ropes and Jeremy only had one ice axe for himself.

I picked up a sausage-thick stick and broke it into two short pieces so that I could use the pointed ends to chisel holes in the glacier’s hard surface. As we began hiking up the glacier we discussed the consequences of slipping. We concluded that even if I slipped I could probably stop myself before reaching the bottom of the glacier where it abruptly ended and dropped ten meters into the lake. Even I slid all the way off the glacier and fell in the lake, the water was probably deep enough that I wouldn’t hit bottom. The iceburn caused by sliding over the glacier’s surface, which was covered in tiny shards of ice-gravel, would probably be the worst thing that would happen. So, there was no danger of serious injury or death, only that of a road-rash like wound and a short swim in a lake filled with icebergs.

Our plan was to climb the glacier to the mouth of the cave, which had been created by a river running through the ice. Here is a picture of the glacier. 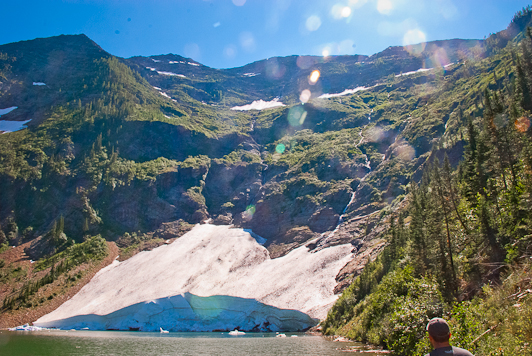 We would attempt to climb down the entire length of the cave and come out at the bottom of the glacier into the lake. There we would determine if we could walk out through the lake, or if we would have to climb back up the cave and return the way we had come. Of course, having planned the expedition only hours earlier, we were grossly unprepared. We had only one ice axe between us, and had no ropes and no lights.

I climbed the glacial slope slowly, methodically chiseling out holes with my sticks and then plunging the sticks into them to pull myself up. It was a hot sunny August day and we were sweating, but the occasional gust of wind swept across the glacier sending shivers through my body. The glacier creaked and groaned in the sun, and we heard the occasional loud splash when a large chunk of ice calved into the lake.

About two-thirds of the way up the glacier we began moving towards the edge. We wouldn’t be able to get off the glacier at the top because as it shrank over the summer it had pulled away from the mountainside leaving a gap several meters wide and several meters deep. We found a place where a chunk of glacier had broken off and tilted away from the glacier. We were able to wedge bodies between the two slabs of ice and lower ourselves to the ground.

We continued our climb on the rocky mountainside, which was slick with water from the glacier we had climbed and others above. Eventually we reached the mouth of the cave at the top of the glacier. Here is a picture of the view. 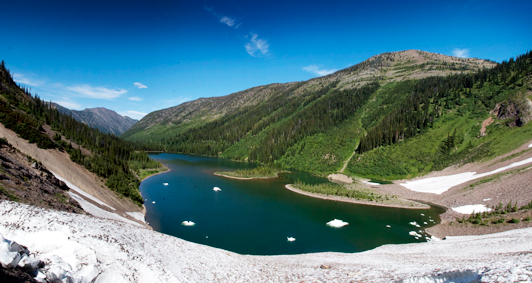 And here is a picture of Jeremy looking down into the cave. 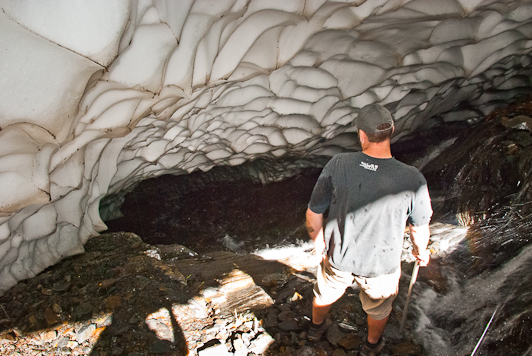 The cave was about two meters tall and ten meters wide. It had been created by a river running under the glacier. Frigid water splashed everywhere as it ran over the steep and rugged surface in tiny waterfalls. We were going to have to climb down the icy river.  Here is a picture of me climbing down the first pitch. 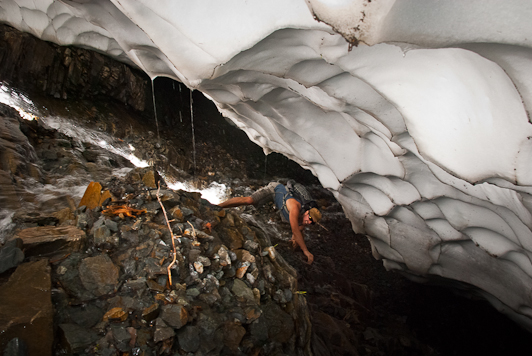 The first pitch was easy to climb down, though the water quickly numbed our hands and feet. At its base was a fork in the cave. We opted for the left, larger, cavern. As we continued our descent the cave became darker. Since we had no flashlights we had to rely on the dwindling light from the mouth of the cave.

The next pitch was much darker, steeper, and longer than the first. Jeremy tried to climb down the right side, and I the left. The pitch was climbable, but after several minutes in the dark groping for footholds with icy water running over our hands, our determination waned. Here is a picture of the water that was freezing our hands. 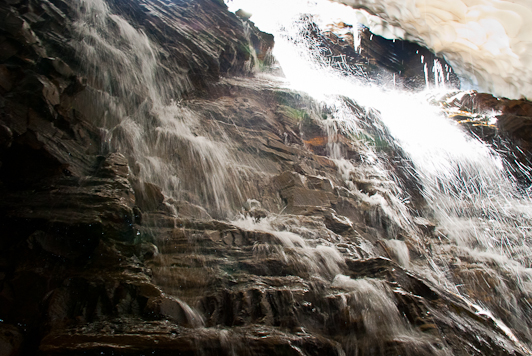 We climbed back to the top of the pitch to discuss the situation. It was clear that it could be climbed, but without light it simply wasn’t safe. Given that Jeremy had children, and I did not have backpackers insurance, we decided it would be prudent to abandon our hopes of descending the length of the cave and leave the way we came.

We returned to the mouth of the cave and descended toward the lake on the mountainside beside the glacier. At one point we walked under a small ice bridge. When we were about twenty meters past it we heard a loud crash. We turned to see that the ice bridge, which had contained hundreds of kilograms of ice, had collapsed where we had just moments earlier been walking.

On the way down I considered swimming in the lake. I had recently been whitewater rafting. On the trip we flipped our raft in the glacier-fed river and the water, although cold, had been bearable. I thought that a picture of me standing on an iceberg in a lake would be great for my blog.

“If I swim out to one of those icebergs in the lake, will you take some pictures for my blog?” I asked Jeremy.

I took off my shoes and shirt and, before I had time to think about what I was doing, dove in and sprinted towards the nearest iceberg. This is what I looked like. 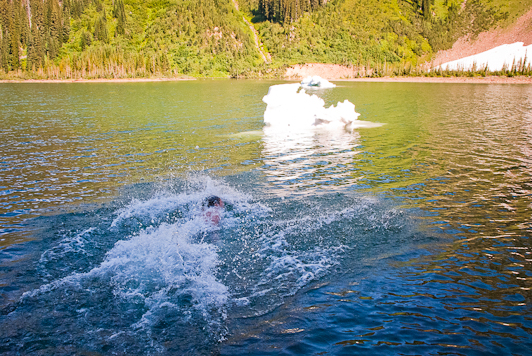 The water was freezing, but I wasn’t in it long. I reached the iceberg and climbed aboard. It slowly started tipping over as I stood on it. Jeremy snapped a few pictures before I dove back into the water. Here is one of them. 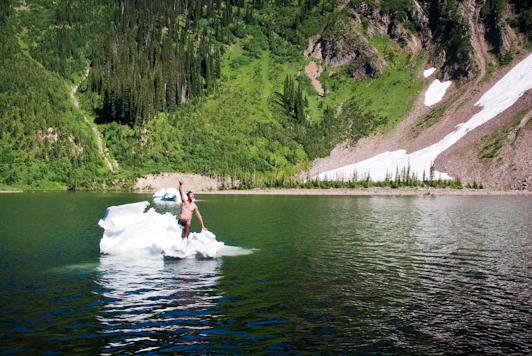 My body burned in the freezing water as I rushed back to shore. Once out of the water I toweled off with my shirt and we headed home satisfied. In the distance a fly fisherman who had seen my performance laughed loudly, his guffaws echoing across the lake.

How to Get to White Boar Lake

If you’d like to check out this beautiful little alpine lake, first, find your way to Marysville, British Columbia, which is located in the Purcell Mountains in the southeast corner of the province.  Drive north out of Marysville towards Kimberley. Less than one kilometer away you will find St. Mary’s Lake Rd. Turn left (west). Follow the road 16 km (to around the 27 km marker) and then turn left. You will cross a small bridge over the St. Mary’s River. Take your second right onto Hellroaring Rd. and follow it 1.6 km to Meachen Rd. and take a right. Follow the road 14 km (to the 16 km marker). Here you should see a sign for White Boar Lake. Take a left and follow the road to the parking lot. White Boar Lake is a 100 m walk down the hill from the parking lot.

Every week we hand-pick the best deals from around the web and deliver you up to 80% off your favorite brands like Patagonia, North Face, and Arc'teryx
Tweet
Pin
Share9
9 Shares