You are here: Home > Blog > Wet and Wild Adventure Safari on the White Nile 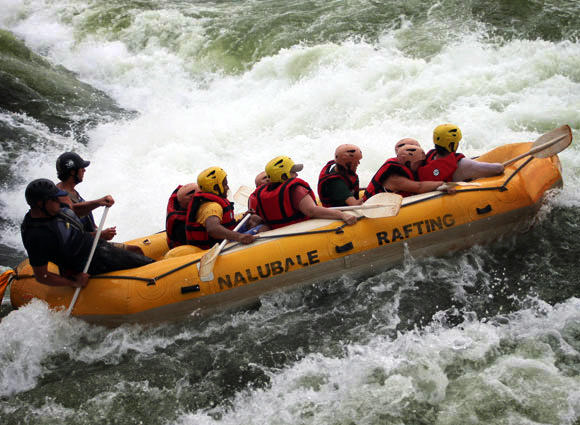 As the raft bucked underneath us, a cool spray from the churning white water all around us hit me straight in the face. I held on fast and instinctively slid deeper into the boat, trying not to lose my paddle in the process. This was one of the last rapids of the day and we were determined not to flip.

Suddenly, we seemed to be lacking any forward propulsion. The raft, and all its occupants, had been lifted up onto a standing wave, and for one incredible moment we surfed the River Nile, neither moving forwards nor sideways, momentarily standing still on top of our very own cushion of white water. It lasted a second or two at most, before our river guide plunged his paddle deep into the wave beneath him and launched us downstream towards calmer waters.

I was on an adventure safari in Uganda and had boldly agreed to go white water rafting on the Nile River. A veritable smorgasbord of adventure activities has developed around its source. Here, near a town called Jinja, the Nile empties out of Lake Victoria to start its 4,000 mile journey north to the Mediterranean, just as intrepid tourists empty out of safari vehicles to sample some of the adrenalin-fuelled excitement on offer. World class kayaking, white water rafting, stand up paddle-boarding and jet-boats are just some of the ways to explore this body of water. Back on dry land, the opportunities continue, with a variety of operators offering adventure activities such as quad bike safaris, horseback safaris, bungee jumping and mountain biking.

You could spend a week on safari here enjoying the adventure activities on offer, but we only had one day. So we signed up for rafting and were quickly assigned our river guide, named Jeremy. Before we set out, we tentatively asked him what the chances of us ‘flipping’ the raft were.

“As long as you do exactly what I say, exactly when I say it, there should be no problem”, he laughed.

It turned out, that was easier said than done. We paddled left and right when instructed, paddled hard on command, and all crouched down low in the boat when asked to ‘Get Down!’. But for many of us, it was our first time rafting, and it showed. Paddles clashed and clanged together as our strokes slipped out of synch, and at one point, someone had to be quietly advised that he was holding his paddle back to front. It seemed like we were not rafting naturals. 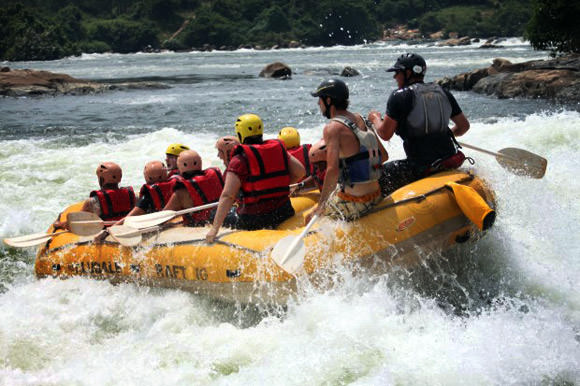 But, rapid by rapid, with Jeremy coaching and cajoling us from the rear, we somehow made it through. We bounced our way down ‘Overtime’, a grade 5 monster of a rapid, paddled hard through ‘Retrospect’ and the intriguingly-named ‘Super Hole’, portaged our rafts around the daunting sight of the grade 6 ‘Itanda Falls’ (quite simply too much ‘big water’, as they say in the adventure safari business, to raft commercially), and somehow made it through The Bad Place (I am not ashamed to say I shut my eyes). By the time we reached Kulu Shaker, the rapid of standing wave fame, our squeals and screams had become whoops of adrenalin, our paddles had found a common pace, cutting deep through the water to position ourselves for just the right course down each rapid. Suddenly we found ourselves in tune with the river, and each other.

In between the torrents of white water, the Nile meandered slowly, broad between its banks and overlooked by Cormorants and Fish Eagles. Here and there we spotted more wildlife  – a large Nile monitor lizard sunning itself on some rocks, and a flash of chestnut fur as Red-tailed monkeys moved through the trees. Children waved, as they bathed in the shallows of this, the longest river in the world, and for a moment we felt like true adventurers.