You are here: Home > Blog > Is StoryBy A Viable Income Stream for Bloggers? 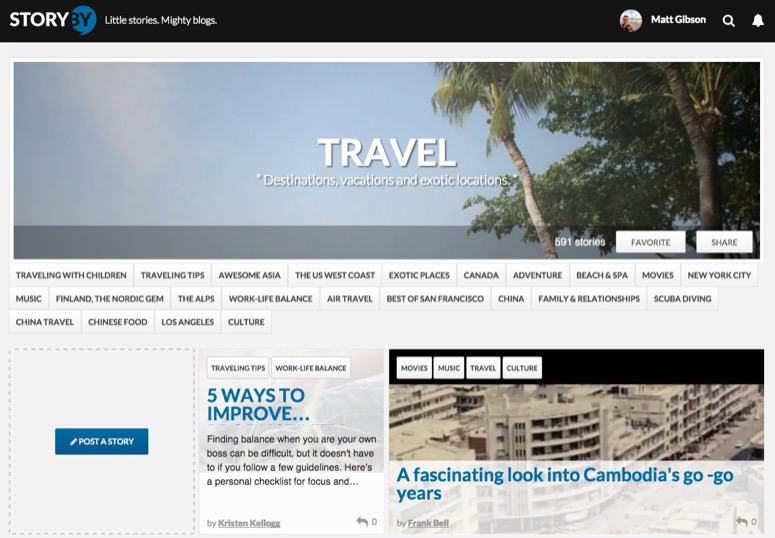 StoryBy says it will pay users for their contributions to the community. Is it worth signing up?

When I was approached by StoryBy to try their platform, I was skeptical. It bills itself as a microblogging platform that pays users for their contributions. I’d heard of social networks that promised to pay their users before and wrote them off without giving them any thought.

And, to be honest, I would have done the same with StoryBy if I’d not been approached by a PR person representing them, who I happen to be friends with, and was offered compensation for writing about it.

Disclaimer: StoryBy paid me to try their platform and write about it. However, according to our agreement, they were buying my time, not my recommendation. Everything I say here is my honest opinion.

One Thing You Should Understand First

Before you read too much into my opinion about this platform, you should understand one thing: I have zero ability to predict social network success.

Really, I’m terrible at it. Although my work requires me to understand social networks in great detail and spend a lot of time on them, I have zero ability to predict how people will react to them.

I’ve always been confounded by the popularity of Twitter. And I don’t understand the attraction of Instagram. Or Snapchat.

And don’t even get me started on Periscope.

I’ve only ever actually looked at one social network and thought, “Yes, this one looks amazing.”

That was Google +, which was probably the biggest social network failure in history.

Given my abysmal track record at predicting social network success, I’m just not going to say anything at all about whether or not this is likely to be popular.

I’d rather keep my mouth shut and be thought a fool, than open it and remove all doubt.

StoryBy is a platform for sharing information that borrows heavily from Reddit. In fact, if I had to guess, I’d think that StoryBy was conceived mainly in hopes of siphoning off Reddit’s users by building a similar platform in which users would be rewarded with money, rather than karma points, for their contributions.

StoryBy is more feature-rich than Reddit. Reddit is an ugly, text-based, link and text sharing platform divided by topic into subreddits. StoryBy is a much more visually-rich card-style sharing platform that allows the sharing of links, text, and photos within the platform, as opposed to Reddit where users normally share images on Imgur and then link to them from Reddit.

StoryBy has also implemented Reddit’s defining feature: an up-and-downvoting feature on every post and every comment, so that the most popular posts are the first you find while browsing, and in the ensuing conversation the most popular comments rise to the top as well, making it very easy for users to find great content and discussions. Like Reddit, users also have the option to favorite or share posts.
The similarities between Reddit and StoryBy are so great that it makes me think StoryBy hopes to capitalize on recent unrest in the Reddit community about the poor management of the platform by its parent company, Conde Nast, by offering a financially incentivized option.

If they succeed, it could become an incredibly popular and useful platform where people crowdsource answers to their questions and share recommendations and outstanding content from around the Internet.

I, for one, absolutely love Reddit but have no allegiance to a platform whose owners have shown very little care in how it’s run. If the masses chose to move, I’d have no qualms about following them.

The question is, can StoryBy woo enough users to achieve critical mass?

StoryBy uses a points system that awards users points based on the popularity of their posts, how much affiliate income their posts earn, how many upvotes their posts receive, and how many times their posts are shared on social media.

Basically, points are awarded to users based on how much they contribute to the growth and earnings of the platform.

Here StoryBy diverges a bit from the Reddit model. Reddit awards users Karma Points not only for popular posts, but for popular comments. That means contributing to the discussion in Reddit is rewarded similarly to posting, although there is no financial incentive.

StoryBy provides no specific information about how its points system works (how many points you earn for upvotes, shares, etc.) and reserves the right to change it anytime.

StoryBy plans to earn money through advertising and affiliate sales. StoryBy will calculate the earnings of each ‘blog’ (which is essentially a topic, or subreddit) and will then pay ⅔ of all revenue to users of that blog based on the points they earned by posting within that blog. And, according to the FAQ, “With the one-third of the revenue StoryBy maintains and further develops the service.”

Right now the only payment system is PayPal, and the payee is required to pay the transaction fee.

StoryBy has no problem with bloggers syndicating (i.e. cutting-and-pasting) content there. So, in an ideal scenario, it could become an easy revenue stream for bloggers.
I read through the copyright section of the T & C pretty thoroughly. Basically, any content you post to StoryBy can then be reused by StoryBy or any of its users, forever.

In this day and age of Creative Commons communities and ubiquitous sharing, I think that’s reasonable.

Can It Earn Money For You?

That’s impossible to say yet. Is the potential there?

The crux of the issue, to me, is whether StoryBy is able to gain critical mass and grow into a popular social network. If it can, then power users will almost certainly earn decent money.

If not, it will end up in the social platform graveyard between Google + and Ello.
But, given my personal record, I’m not willing to hazard a guess of which it will be.

BEST GEAR DEALS ONLINE
Up to 80% off your favorite brands like Patagonia,North Face, and Arc'teryx.
×
Increase Your Following More Efficiently
Sign up for my travel blogging industry newsletter to receive: