You are here: Home > Blog > 5 Surprising Reasons I Want to Visit Suzhou, China 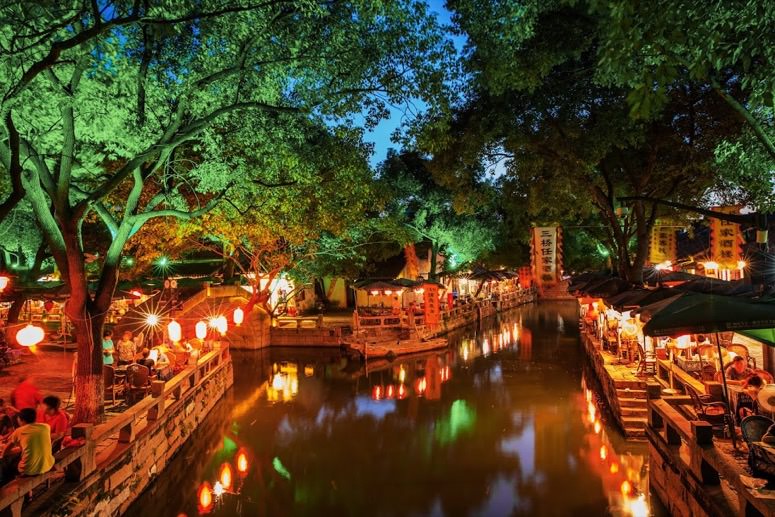 This blog post is was created in collaboration with Visit Suzhou to help promote their #TravelSuzhou contest, but all opinions expressed are own and I am in no other way connected to this contest or Visit Suzhou.

Suzhou, China isn’t a city that you hear travelers speak of often, but it should be. This ancient city, dating back to 514 B.C., is known as the Venice of the Orient for its abundance of ponds, streams and canals. In fact, nearly half of the city is covered by water.

Suzhou has a mild climate ideal for exploring the city’s dozens of gardens (some of which are World Heritage sites), museums, temples, and historic streets. The following are the five main reasons I want visit Suzhou, China. 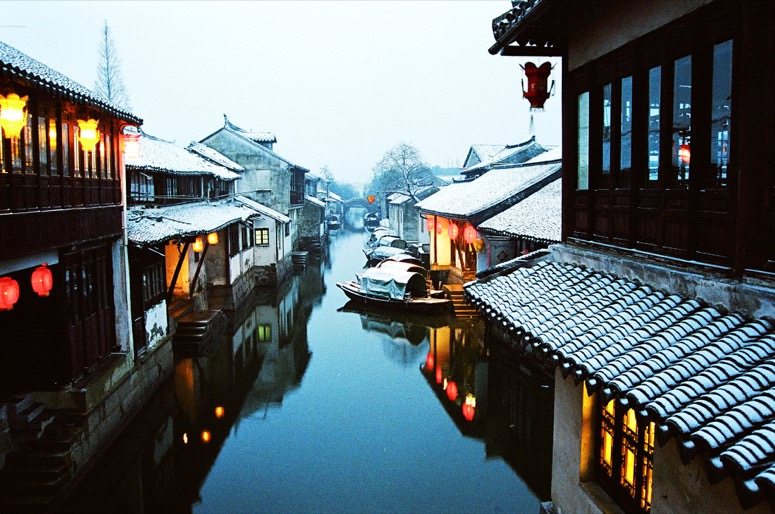 Forty-two percent of Suzhou’s city area is underwater. The Suzhou countryside is soaking too. The rural water towns are ideal places to escape the non-stop action of the city. Find your way to Tongli in the Wujiang District on Taihu Lake and you’ll find it difficult to stop snapping photos of the 1,000-year-old town. Wander across sacred bridges, including the Taiping, the Jili, and the Changing, and into the town’s must-visit mansions and gardens. 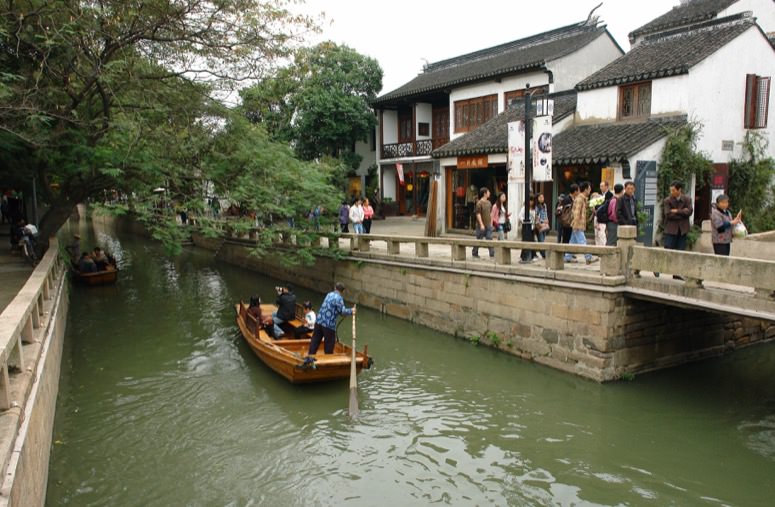 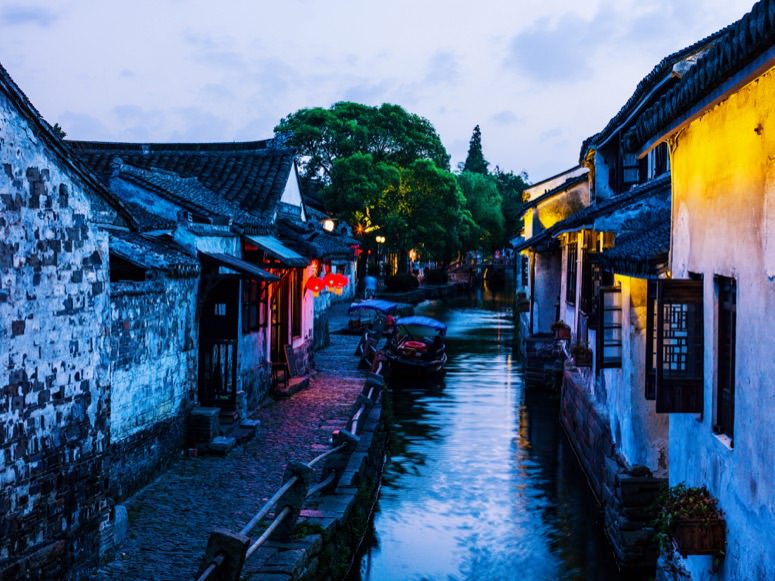 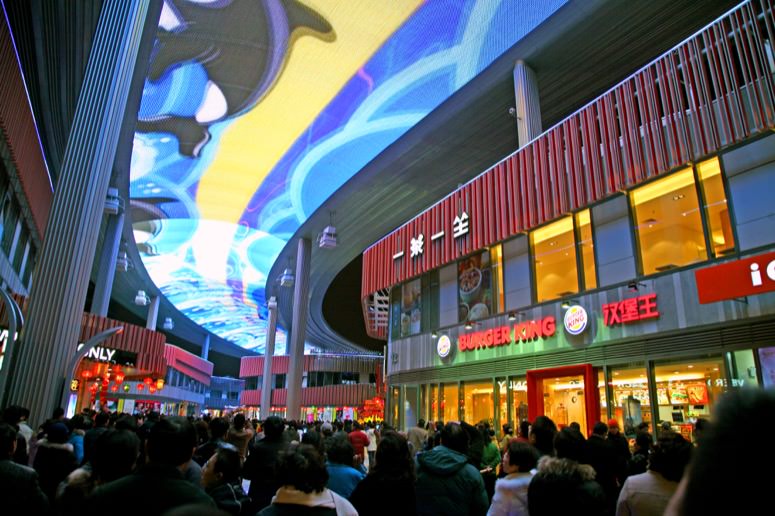 Screens aren’t typically something you seek on a visit to an ancient city, but the Suzhou Industrial Park (SIP) is nothing shy of impressive. It’s the center of modern Suzhou and is packed with hip restaurants, shops, and contemporary hotels. Set your sights on Suzhou Industrial Park’s humongous water curtain and musical fountain at 8 p.m., on Friday or Saturday night, and you’ll catch a 30-minute show that shouldn’t be missed.

Continue your tour of massive screens by heading to Harmony Times Square to admire the world’s largest Sky Screen — an LED screen that dwarfs the Las Vegas Sky Screen in length. 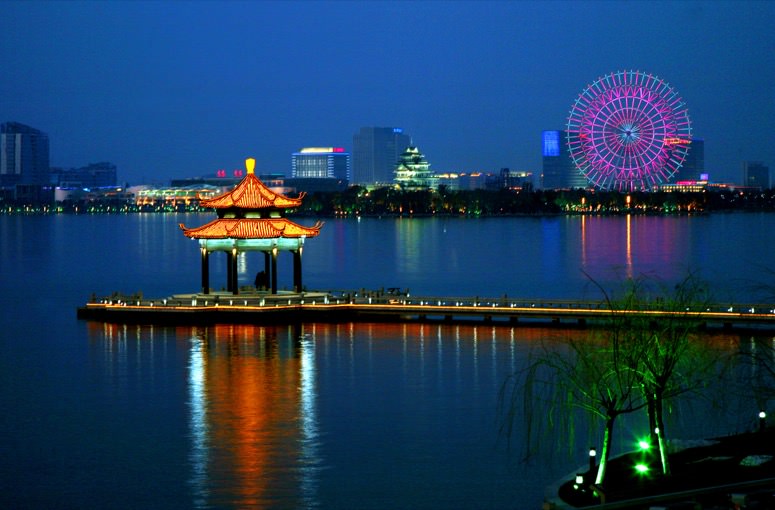 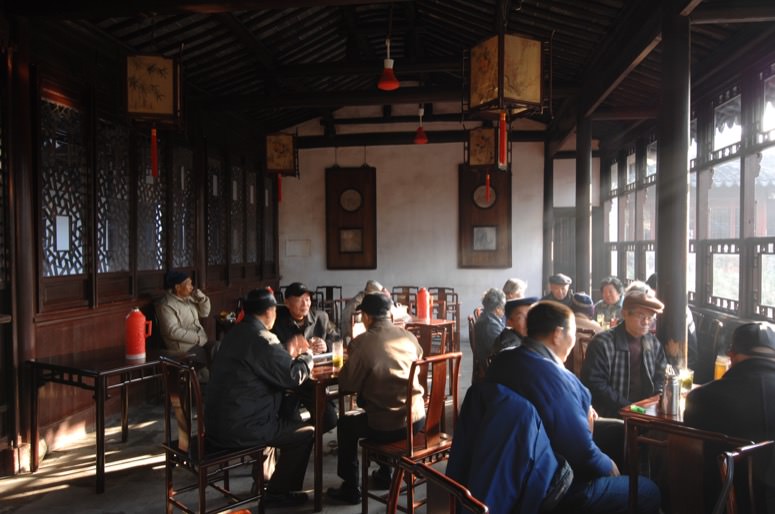 I don’t really write about tea on my blog, so most people don’t know how much I love green tea. When I lived in Taiwan tea was part of my daily routine — usually at several different times. I drank it all, from cheap street tea to fancy-pants teahouse tea in mountaintop tea houses.

So, I know a little bit about tea. You don’t have to be a tea aficionado to become addicted to Suzhou’s famous Biluochun tea. This hand-picked tea, also known as emerald spring spiral, is found in the Taihu Lake region of Dongshan County. The gentle green flavor has made it the most famous of all Chinese green teas, and it is praised for its healing powers. 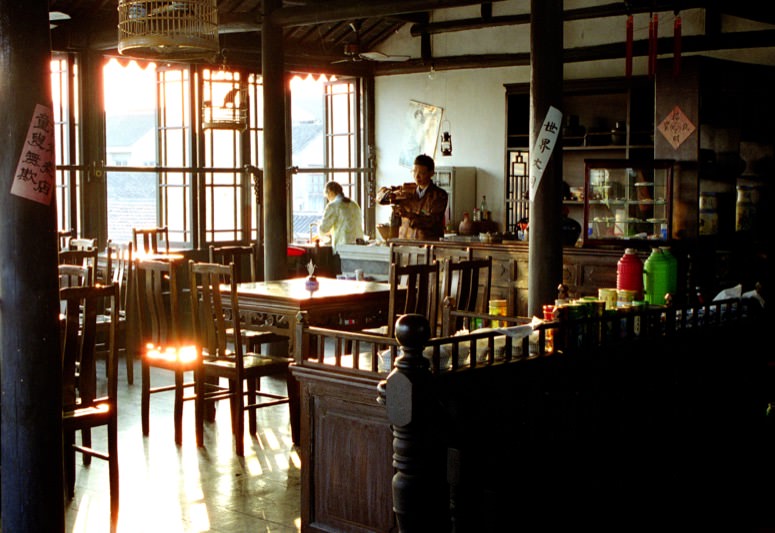 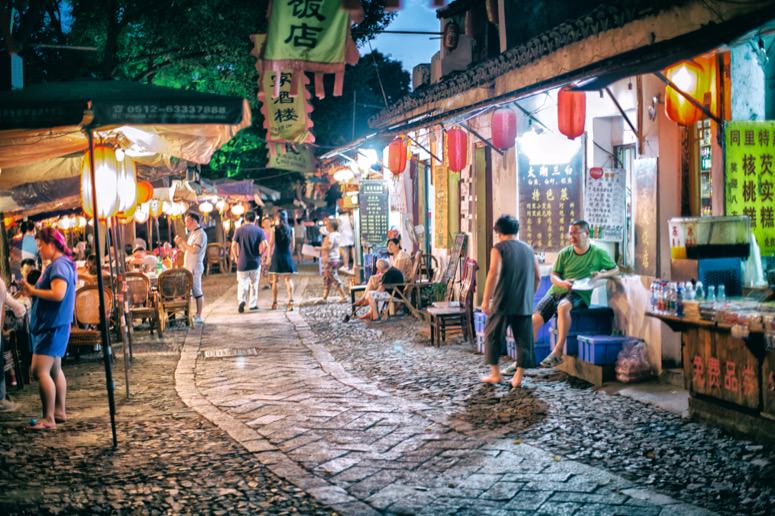 The traditional founding date of Suzhou is 514 B.C. However, historians suggest that silk production has been present in the Suzhou area since the Bronze Age (2000 B.C. to 700 B.C.). Silk Roads were constructed to extend from Suzhou to places as far as Persia, Japan, and Rome.

It is said that Marco Polo visited the town in the 13th century and remarked on its elegant bridges, canals, skilled craftsmen, merchants, and philosophers. The city then blossomed into a cultured city where artists and scholars from across the country would move to live.

Suzhou was listed as a city of historical and cultural protection by the State Council in 1981. Visitors can now experience signs of the town’s history in its temples, museums, and gardens. But I’d love to spend days just roaming the ancient alleyways. 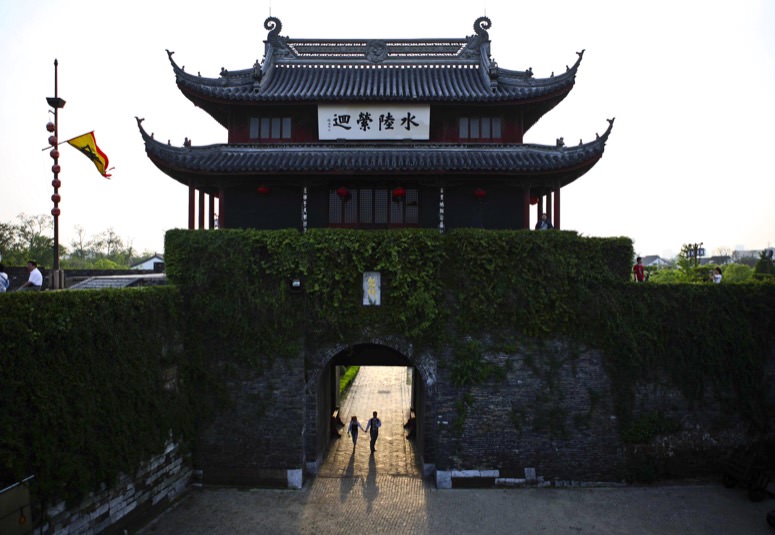 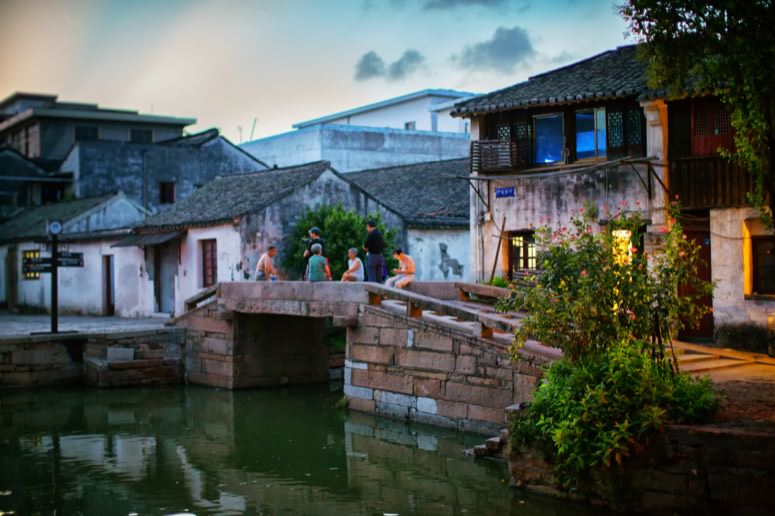 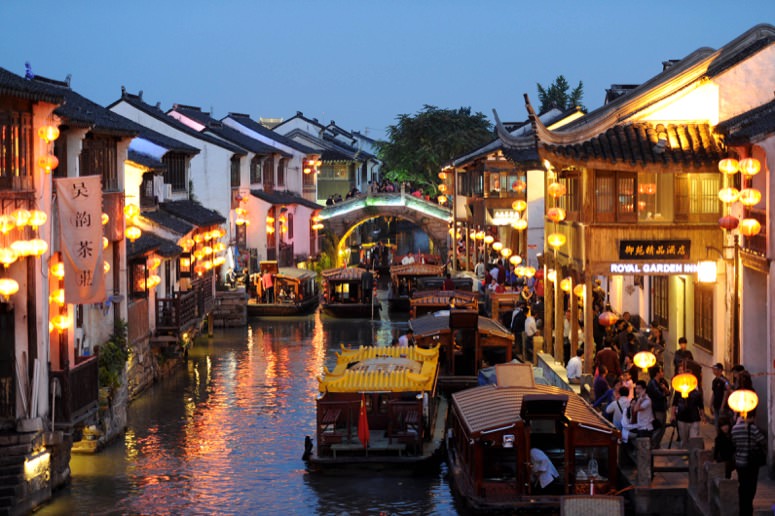 The Grand Canal became a UNESCO World Heritage Site in 2014, but it has been one of Suzhou’s most famed attractions for centuries. The Grand Canal is the world’s longest canal, extending 1,104 miles from Beijing to Hangzhou and connecting the Yellow and Yangtze rivers.

Travelers can take a boat cruise along the canal to step back in time and snap photos of the ancient buildings from a unique vantage point. A cruise along the Grand Canal also gives tourists a brief look into the lives of those who call Suzhou home. 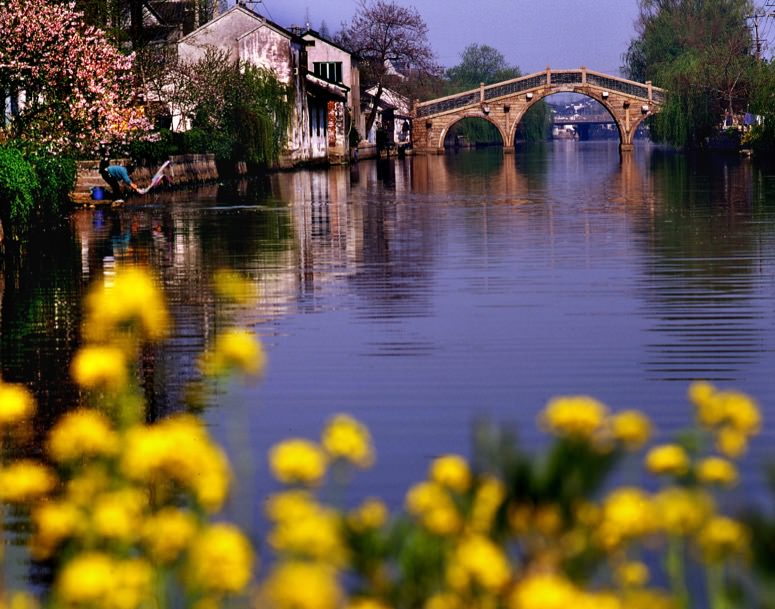 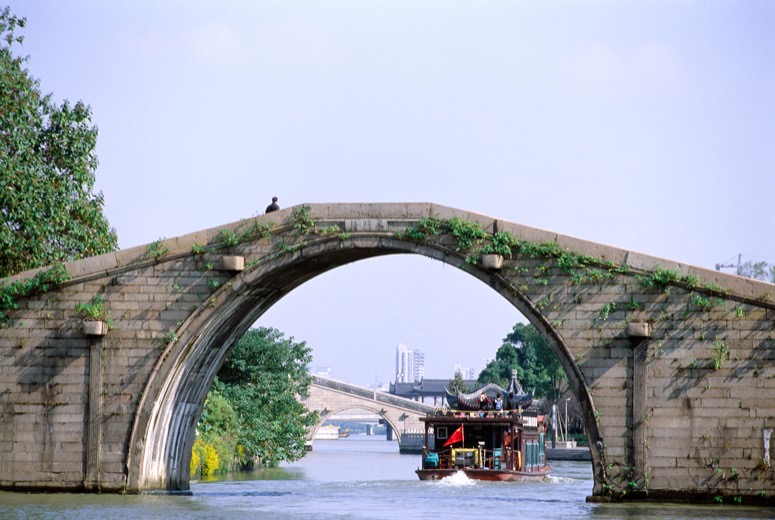 Every week we hand-pick the best deals from around the web and deliver you up to 80% off your favorite brands like Patagonia, North Face, and Arc'teryx
Tweet
Pin1
Share16
17 Shares