Philippines Adventures PT2: Mud and Serendipity in the Rice Terraces of the Philippine Cordilleras

You are here: Home > Blog > Philippines Adventures PT2: Mud and Serendipity in the Rice Terraces of the Philippine Cordilleras

We arranged our accomodations in advance without knowing anything about the area that we were visiting, which is a perfect way to mess up your vacation before you even arrive.

I don’t mean to imply that there was anything wrong with the Native Village Inn where we stayed. It was actually very nice–a small resort of traditionally-constructed aboriginal huts with a good restaurant and a stunning view of the emerald and blue Hapo Rice Terraces.

The problem for me was that the Native Village Inn was located a thirty-minute ride from Banaue, which was still another hour’s ride (at least) from the trailhead leading to the Batad Rice Terraces where I wanted to go hiking. This was less a problem for my traveling companion Jeannie Mark (aka Nomadic Chick) who enjoys exploring foreign cuisines and cultures in relative comfort more than dragging herself across muddy mountainsides. I, however, wanted to play in mud.

It was mud I wanted and mud I would get, if not exactly in the way I desired. Tons of unexpected mud was going to lead us both on a an unexpected and serendipitous side trip.

We were only staying in the area for three days. There were other hikes that could be done in the nearby Hapo Rice Terraces, which are epically beautiful themselves–but everything that I’d read said that the Batad Terraces were the most majestic.

Day 1: Our Arrival in Banaue

We arrived in Banaue in the morning after a freezing all-night bus journey. It was cool and foggy and raining lightly. We ate breakfast in Banaue and then arranged for a jeepney to take us to the Native Village Inn. The resort was nearly empty because December is a slow time for tourism (things start to pick up in January and stay busy through spring). The Native Village Inn is an authentic native-themed resort perched on the edge of a steep slope that drops several hundred meters into the valley where the Hapo Rice Terraces are. Here are a few pictures of the view from the thatched-roof covered outdoor dinner table beside our huts and of the decorations inside. 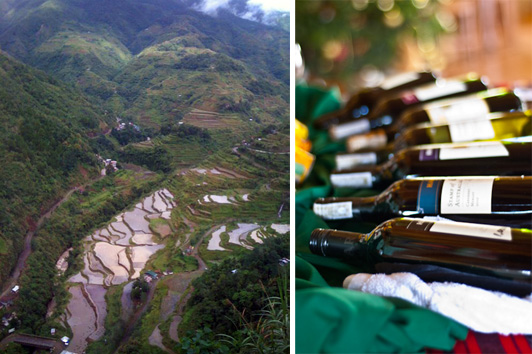 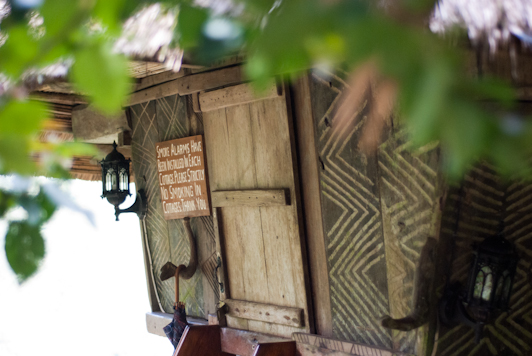 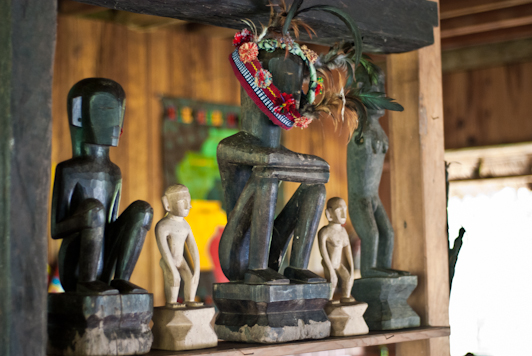 That afternoon we unpacked, explored the grounds, ate a splendid filipino dinner, and made plans to visit the Batad Rice Terraces in the morning.

When we woke up it was still foggy and rainy, but we only had two days to explore the terraces, so we caught a jeepney into Banaue where we looked for others to share a ride to the Batad Saddle. The Batad Saddle is the head of the trail to the village of Batad where the storied rice terraces were located. We met a group of three Dutch engineers and another group of four hikers who agreed to come with us. The hikers would get dropped off before the saddle for a longer hike, and the engineers would join Jeannie and I hiking into Batad from the saddle.

The trail descended steeply into the foggy valley. We had been told that the weather had been rainy in the morning and clear in the afternoon during the previous week, and we hoped it would be the same for our hike. After about 40 minutes we arrived in Batad, a 2000-year-old village of 1500 people living in the hills around a swath of rice terraces crossing a large amphitheater shaped hillside. Here is a picture of it. 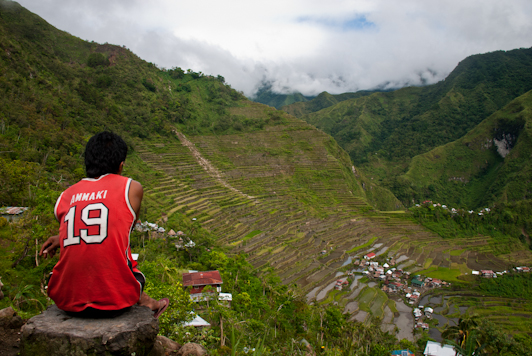 The hike down had upset Jeannie’s weak knee, so she opted to stay in the village and enjoy the view from the patio of Rita’s restaurant. We found a young filipino guide named Rambo who agreed to guide us across the terraces to the Tappiyh Waterfall and back. Rambo was a student and spoke English well. He told us that the rice grown in the Batad Terraces was all organic and was not exported because they only produced enough to meet the needs of the villagers. He also told us that their irrigation system had been damaged by a slide caused by heavy rains earlier in the year and that was the reason why many of the terraces were empty rather than growing with young rice plants. He told us that the government had provided some money to fix it, but he didn’t sound hopeful about the project’s success.

The rice terraces actually face many difficulties and are on Unesco’s list of endangered world heritage sites. More information can be found in this photo essay on the Rice Terraces of the Philippine Cordilleras.

Here are some pictures of the the hike. 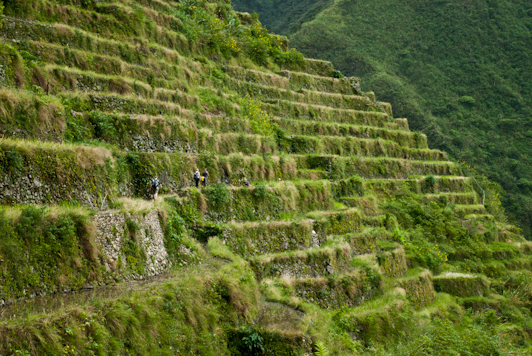 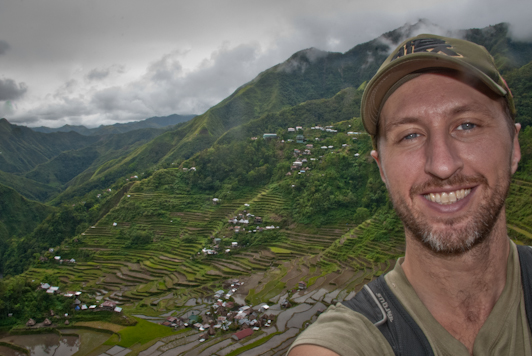 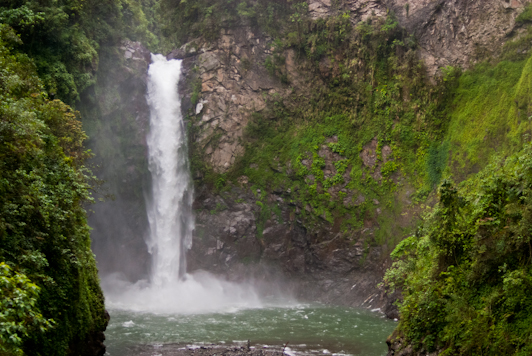 Day 3: A Serendipitous Trip to the Hapo Rice Terraces

It was raining again so Jeannie and I decided to go into Banaue where there was Internet to do some blogging, but when we asked the girls working at the desk to call us a tricycle to take us into town they informed us that the rain had caused a slide that made the road impassable. We couldn’t go. After working for a few hours in we decided that we should not totally waste the day, so decided to visit a nearby natural hot spring that we had heard about. An hour later we were riding in a tricycle over a bumpy dirt road that crossed two mostly cleared (read nearly knee-deep mud) mudslides. It late afternoon when we arrived at the trailhead. The guide informed us that the hot springs were a five kilometer hike away. Jeannie, whose knee hadn’t yet recovered from the previous hike, was not pleased. 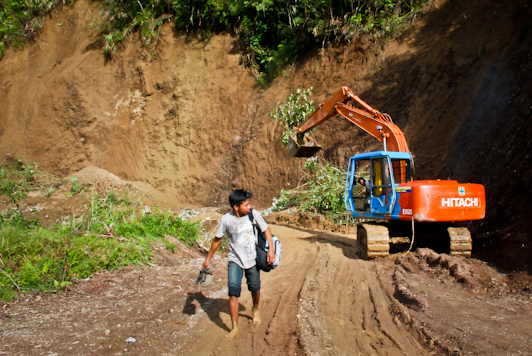 The weather had cleared by then, and the hike took us directly through the Hapo Rice Terraces. The terraces were not as majestic as those in Batad, but still an amazing sight in their own right. The hike was much better that the previous day’s, though, because it was there were no other tourists. The sun was low in the sky as we crossed the terraces and the light was perfect for pictures. I was in heaven. For lack of time and flashlights we had to turn back before we made it to the hot springs. I did, however, take loads of fantastic pictures in the late afternoon light. Here are a few of them. 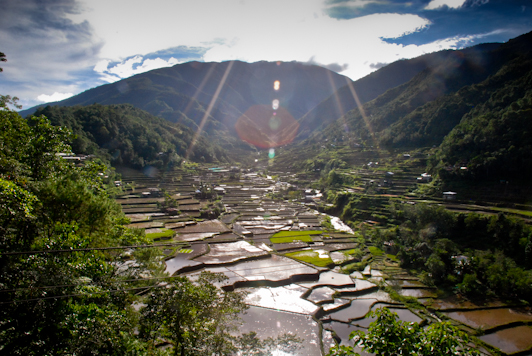 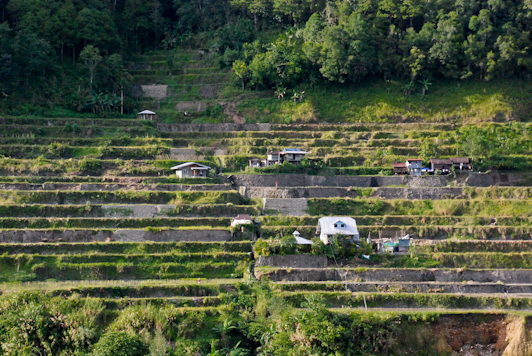 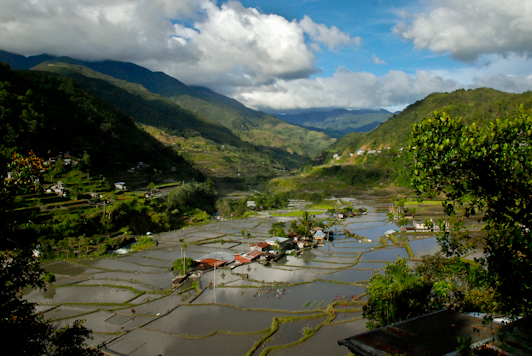 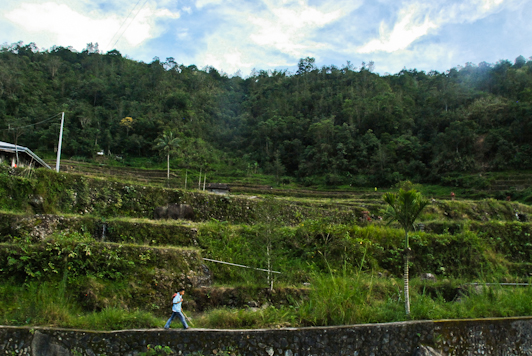 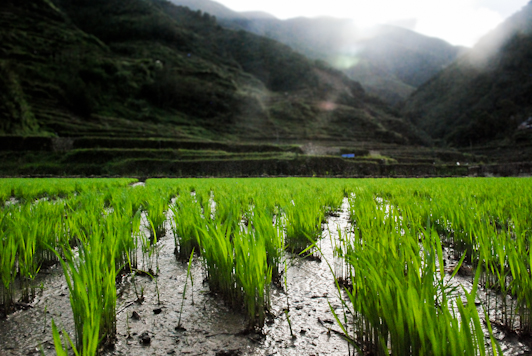 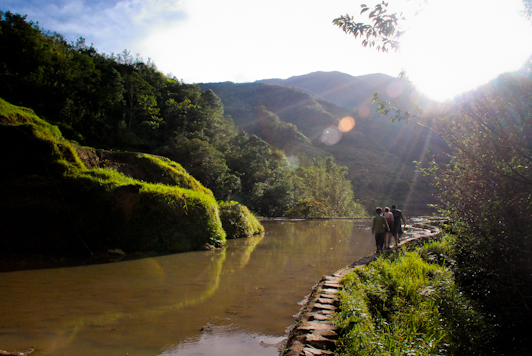 We returned to the Native Village Inn in time for dinner. We learned that the road had been cleared, so we would be able to return to Banaue and catch an overnight bus back to Manila. That was good, because we had no time to spare. We would only have a few hours between our early-morning arrival and our flight to Bohol where we hoped to find a seldom visited hill tribe called the Eskaya.

3 thoughts on “Philippines Adventures PT2: Mud and Serendipity in the Rice Terraces of the Philippine Cordilleras”