Via Ferrata in the Italian Dolomites

You are here: Home > Blog > Via Ferrata in the Italian Dolomites

There is no better way for untrained mountaineers to experience the highest ridges and peaks of the most scenic range of mountains in the Alps than via ferrata in the Dolomites. Via ferrata is a system of cables, steps, and ladders embedded in a mountainside that enables untrained adventurers (with proper safety equipment) to ascend to peaks and ridges formerly accessible only to experienced climbers. The best place for via ferrata is in the Italy’s Domlomite Mountains, where it was first developed. 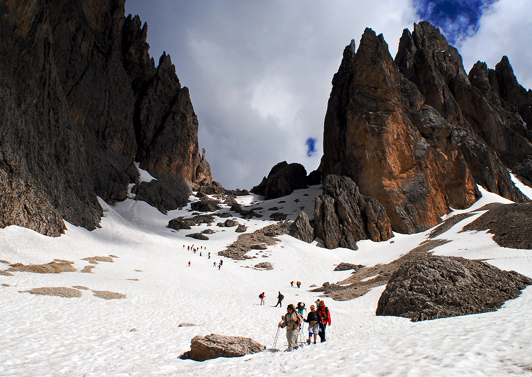 What is Via Ferrata?

The word via ferrata refers to both a sport and to the course on which the sport is practiced. The sport of via ferrata is a type of mountaineering that involves hiking, scrambling, and mountain climbing assisted by ladders, bridges, cables, and stemples (narrow wooden steps attached to the mountainside with iron bolts). The courses where this is done, called via ferrate, are routes leading through rugged and precipitous terrain where difficult areas are made navigable by installations in the rock including ladders, cables, and bridges. This makes via ferrata somewhat safer, and much more accessible to untrained adventures, than mountain climbing.

Although it is easier and safer than mountain climbing, via ferrata still poses a great risk of injury. Although the risk of falling while doing via ferrata is smaller than when climbing, the likelihood of being injured in a fall from via ferrata is greater, partly because one is likely to fall onto the via ferrata equipment protruding from the mountain side and also because, due the design of via ferrate and associated safety equipment, it’s possible for a person to fall much farther than one would when using climbing safety gear and techniques. So, it is important to exercise caution and take proper safety measures.

That being said, via ferrata is rapidly gaining in popularity around the world with courses in at least 18 countries in North America, Europe, Asia, and the Middle East. The sport is most entrenched in Italy and France, and is growing very quickly in Canada and the United States. The highest via ferrata in the world, however, is located at an altitude of 3800 m on Mount Kinabalu (the tallest mountain in Southeast Asia) in the state of Sabah, in Malaysia. 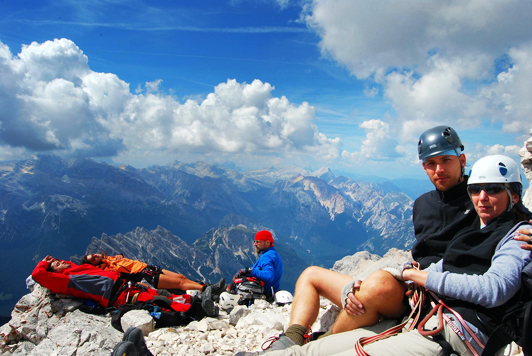 The home of Via Ferrata: Italy’s Dolomite Mountains

The Dolomite Mountains (a section of the Alps located partly in northern Italy) consist of sweeping valleys flanked by sections of tall spires and precipitous ridges. The valleys are gentle enough to allow one to hike to a very high altitude, but the ruggedness of the higher regions makes them all but impossible to climb without assistance. This makes them ideal for via ferrata.

The home of via ferrata, the Dolomites have more via ferrate than anywhere else in the world. Thus, one may climb these ‘iron roads’ to high altitudes and then follow them along elevated ridges and peaks where they are rewarded with unmatched views of the Alps beautiful vistas and valleys. With the exception of a professional climbing expedition, there is no better way to experience the variety and beauty of the Italian Dolomites than via ferrata. For a taste of what you can expect, check out the photos of via ferrata in the Dolomites below. 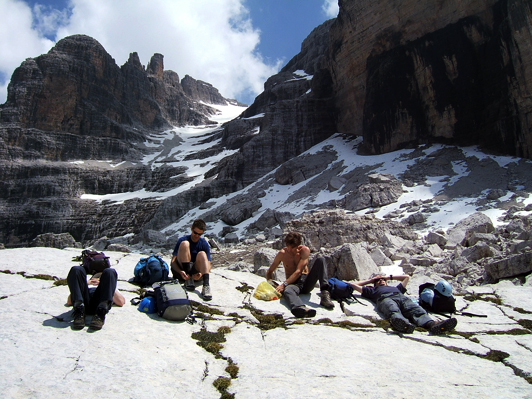 The History of Via Ferrata

Via ferrata is was borne from Italy’s need to move troops and supplies efficiently through the inhospitable Dolomite Mountains in order to battle with Austria during the First World War. It was probably in 1915 or 16 that the first via ferrate ladders and cables were fixed mountainsides.

Via ferrate back then were much less reliable than they are today. Over the years the wooden steps and ladders and rope have been replaced by iron ladders, metal stemples, and steel cables, and many new routes have been added by the Italian Alpine Hiking Club (Club Alpino Italiano), who are the main caretakers of Italy’s via ferrate. Many remnants of the First World War, such as trenches and dugouts, can still be seen along the via ferrate in the Italian Dolomites. 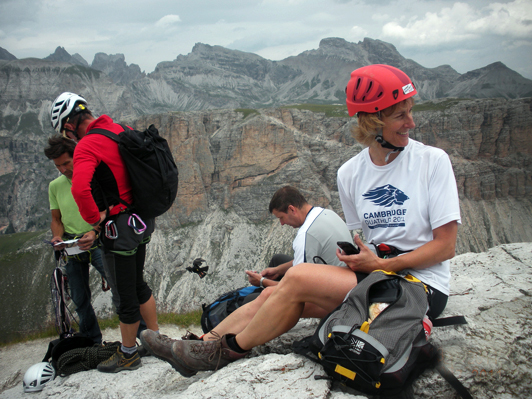 Plan Your Trip to Via Ferrata in Italy’s Dolomites

The most convenient international airport for travelling to the Italian Dolomites is in Venice. From there you can travel by car or bus to Alta Badia or Cortina d’Ampezzo, both of which are in close proximity to numerous via ferrate. Both towns have ample via ferrate facilities, maps, and guides to help you plan tour.

Both towns have accommodations for all budgets. If you want to be pampered after you day in the mountains, you will find plenty of luxury villas in Italy.