This piece, originally written for, but never published by, McSweeney’s Internet Tendencies has been one of the most popular pieces on this website ever since I first posted it, and has received many compliments. 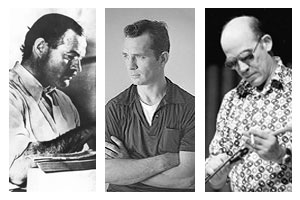 The theatre was dark and reeked with the stench of a hundred overfed accountants gorging on chemical drenched popcorn and syrup water. I’d been assigned to review No Country for Old Men for Rolling Stone, and was already a week past deadline, but had abandoned the assignment partly because when you eat as much mescaline as I had it’s very hard to focus on a predetermined task, and also because I realized what a fleecing the operation was. Fifteen dollars for a ticket. Eight dollars for popcorn. Four dollars for soda. This wasn’t art. It was a twisted perversion of the American dream, a herding of overweight suburbanites into giant pens with flashing pictures on the wall to stupefy them into paying outrageous prices for sickening foods.

I had brought my lawyer, a large hairy Samoan, and I explained this to him as we waited to purchase a package of Mentos, which is the only thing that will calm him in the throws of a powerful mescaline trip, but the mescaline was already batting his mind around like a squash ball. He kept looking around and talking about an agent and the ‘incident’ on his last trip to Batangas. Suddenly he muttered something about “the banana man” and ran down the up escalator, leaving a trail of sweatpants wearing housewives on the ground. I slipped into the theater.

The movie had started, but I was distracted by the raincoat-wearing pervert in front of me, who looked like the police sketch of a local pedophile. I was trying to get into position to snap his neck without drawing attention when I saw that a man further down in the theater kept turning to look at me. He was old and reptilian. Was this the agent that my lawyer had seen? Paranoia gripped me. Did I have any outstanding warrants? Was he an assassin? Or worse yet, a Republican? It was clear that I had to make a run for it and come up with an excuse for not finishing the article.

I ran out the emergency exit hoping that it would sound the alarm and empty the theater, but the alarm didn’t go off. There was a fire extinguisher in a glass case on the wall. I broke the glass and the alarm screamed. I sprinted back into the theater using the fire extinguisher to create a smokescreen. I thought I was in the clear, but as I ran up the aisle the agent leaped in front of me like an orangutan and punched me in the face. I awoke to my lawyer explaining to the theater manager that I was autistic and threatening to sue him for discrimination against the handicapped if he didn’t allow us to leave.

He pulled me to my feet and dragged me out my Cadillac, which we drove at top speed through the city, onto the interstate and headed for Vegas, where I had a friend who could give us some queludes to bring us back to our senses so that we could figure out who the agent was, and what he wanted.

Neal and I had been planning to see No Country for Old Men because Neal and I always dug Cohen brothers movies and how they created such funny-sad characters that mirrored the funny-sadness of life, but when we were in the Royal having a beer before the movie Neal met a this beautiful little thin-hipped waitress who was almost finished work and decided to boost a car and drive her out of the city and make her in a field – Neal apologized profusely because beneath his animal sexuality he’s really a golden hearted angel and I told him that it was OK and bought a bottle of port to keep me company and hid it under my raincoat but that was a bad idea because I got too drunk waiting for the movie to start and couldn’t see clearly or understand the story so I started meditating on this crazy cat behind me who was moving around and mumbling a crazy dark monologue about pedophiles and agents and he kept getting more and more agitated like a tortured dark theater ogre until finally he stood up and bounded down the aisle on great long ogre legs and rushed out the door – then the fire alarm went off and he rushed back in shooting plumes of white foam across the theater while running up the aisle – but then suddenly a man stood up and punched him, which I hated because I hate to see anything hurt, and can’t even bring myself to kill a mosquito, and because I came to think that he was a of mad angel here to save us all from ourselves so I ran out of the theater and kept running for two blocks before realizing that I’d left the port in the theater and that I didn’t have money to buy more and that even after encountering a wild angel of the night, when your wine is gone and you’re alone the city is a desolate place – so I sat down on and cried into my knees wishing that Neal and the waitress would pull up in a car blaring bebop on the radio and carry me off into the hopeless American night.

I sipped gin from the flask that Ezra had given me and I hid it under my coat whenever the usher walked past. The gin was cold and biting and helped to pass the time while I waited for the movie to begin. After a while the theater became dark and quiet. The movie began. It was No Country for Old Men by the Cohen brothers, who always made fine movies, so I expected to enjoy it.

The story followed a man who killed people for profit and fun, a cowboy who discovered a bag of money, and an idealistic policeman. The story was interesting and I liked it although it wasn’t much like the brothers’ previous movies. The writing was refined and the cinematography was good.

The experience was all very good except for a man several rows behind me who kept talking and moving around. I kept turning around to glare at him so that he would be quiet. Eventually the man stood up and ran out the emergency exit. A moment later the fire alarm went off and the man rushed back into the theater screaming “fire” and shooting a fire extinguisher into the crowd. I had been enjoying the movie a great deal and this made me very angry so, when he came near me I stood up and punched his face. I could tell he wasn’t a boxer because he had no legs. He fell down and shouted for others to attack me because I was an “agent” and going to take him away for “water boarding”, so I punched him again and put him out.

After that the movie was postponed until the police could come, and I had an appointment with Gertrude for aperitifs at the Royal, so I left. I can’t say much about this movie except that the beginning is different from anything that the Cohen brothers have made, but it’s probably as good as anything that they’ve made, and it may attract lunatics, but it’s probably worth seeing if you’re not afraid to box a lunatic.

Every week we hand-pick the best deals from around the web and deliver you up to 80% off your favorite brands like Patagonia, North Face, and Arc'teryx
Tweet
Pin
Share2
2 Shares