You are here: Home > Blog > Is Heavenly the Best Ski Resort in the USA? 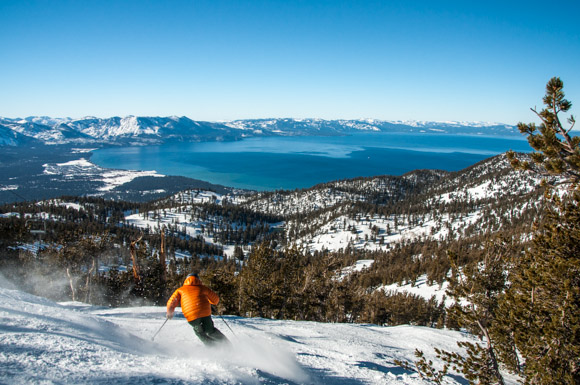 Heavenly certainly has a lot going for it. At 4800 acres, it’s one of the biggest ski resorts in the United States. It also stands above two unique landscapes — Lake Tahoe and the Nevada desert — which makes for beautiful views unlike those found anywhere else. Heavenly is a Vail Resorts property, and as such the mountain has photographers stationed strategically at particularly beautiful spots to take visitors’ photos, which are then sent to them via the Epic Mix app.

Do those qualities make Heavenly the best ski resort in the United States?

Beyond the slopes, visitors to Heavenly also reap the benefits of staying in South Lake Tahoe, one of the most popular vacation destinations in the United States, where one can gamble in the casinos, dine in 5-star restaurants, and party until dawn in the Nevada nightclubs.

For all of the reasons that I mentioned above, Heavenly provides it’s visitors with a ski vacation experience that can’t be had anywhere else.

Personally, I can only see three drawbacks to visiting Heavenly.

First, while the experience at Heavenly is unlike any other, you do have to pay for it. Heavenly’s lift tickets are among the priciest in the country. And, as a busy tourist destination, accommodations in South Lake Tahoe are also more expensive than those that can be found near smaller and more out-of-the-way resorts. This makes Heavenly a bit of a tough destination for ski vacationers trying to get by on a small budget.

Second, with an average annual snowfall of 360 inches, Heavenly certainly has it’s share of powder days. It’s not, however, a powderhound’s dream, like Jackson Hole, Grand Targhee, and Sugar Bowl, all of which often receive 500 inches in a season.

The last drawback is more of a personal preference than a deficiency of the resort. Heavenly is a huge, corporate-owned resort. This isn’t a problem for many people. I, however, find that I prefer the character and small-townish warmth of smaller resorts. But, that’s just me. I’m a small town kind of guy.

Heavenly has several qualities that you can’t find anywhere else in the world. There’s a massive amount of terrain, you can basically ski right into a casino and hit the tables without taking off your boots, and, in the words of longtime local Mike Frye, “the views definitely don’t suck.”

On the other hand, it’s pricey and doesn’t get as much powder as some other notable ski areas.

What do you think? Could Heavenly be the best ski resort in the USA.

What do you think? Could Heavenly be the best ski resort in the USA?