You are here: Home > Blog > The Last Ifugao Weaver of Batad

I met Rita in Batad, one of the small villages perched among the 2000-year-old rice terraces of the jagged Cordillera mountain range on the island of Luzon in the Philippines.

No roads reach the mountain village. To get to Batad my friends and I hired a jeepney in Banue and rode an hour along a windy dirt road to the trailhead where we disembarked. We hiked an hour down the steep rocky trail into the village.

Most of the villages in this part of the Philippine Cordillera can only be reached on foot.

It’s well worth the effort.

Check out my photoessay from the rice terraces here.

I’m enamored by this place.

The rice terraces are a tribute to human engineering and endurance. Sometimes called “The Eighth Wonder of the World,” the enormous steps were carved by hand from jagged mountainside using stone tools over two millennia ago. It’s said that if they were laid end-to-end, the steps would circle the globe.

To give you an idea of their size, here’s a photo of my friends hiking across them. 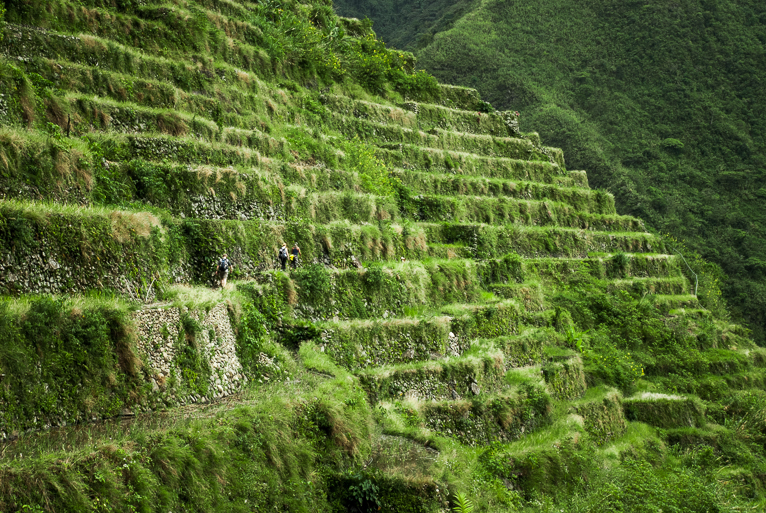 The Ifugao people still farm the terraces the same way they were farmed when they were first built and flood them using the same system of stone aqueducts their ancestors carved out of the mountainside.

During the harvest the community takes to the fields and collectively chants the Epic HudHud of the Ifugao, an epic story with 40 episodes that takes three to four full days to complete. I love the thought of the HudHud filling the valley as the community works and chants in unison day after day.

Here’s a sample of the chant that was uploaded to YouTube by the U.S. Embassy in Manila.

The Ifugao culture — like many around the world — is slowly being eroded as television and the Internet reach the youth with images of a vast and exciting world to explore outside the village. Many of the young people move to the city searching for jobs, money, technology, and excitement.  So, in Batad, the number of farmers in the terraces is slowly declining and the HudHud chant is growing dimmer each year.

We spent the day hiking the hills around the village and visiting a waterfall. Afterward I sat at a restaurant overlooking the terraces while my friends took a stroll through the village. That was when Rita introduced herself.

After chatting for a few minutes I asked Rita how old she was.

Rita had been born in Batad. She didn’t know when she was born because at the time her tribe didn’t keep track of such things. We both figured she was probably in her mid-sixties.

If Rita was 65 she would have been born around the time that Filipino guerillas and the United States army were finishing a brutal campaign expel the Imperial Japanese Army from the Philippines.

World War II was nearly over. The Imperial Japanese Army had decided to make the Philippines its last stand in the Pacific, so they had nothing to lose. This made the Japanese military — which wasn’t known for it’s appreciation for human rights on the best of days — extremely dangerous.

The Manila Massacre, in which over one hundred thousand Filipino civilians were slaughtered by the Japanese, had occurred almost exactly 65 years before, and 165 miles south of, my chat with Rita on the balcony of her restaurant overlooking the Batad Rice Terraces.

This was the view. 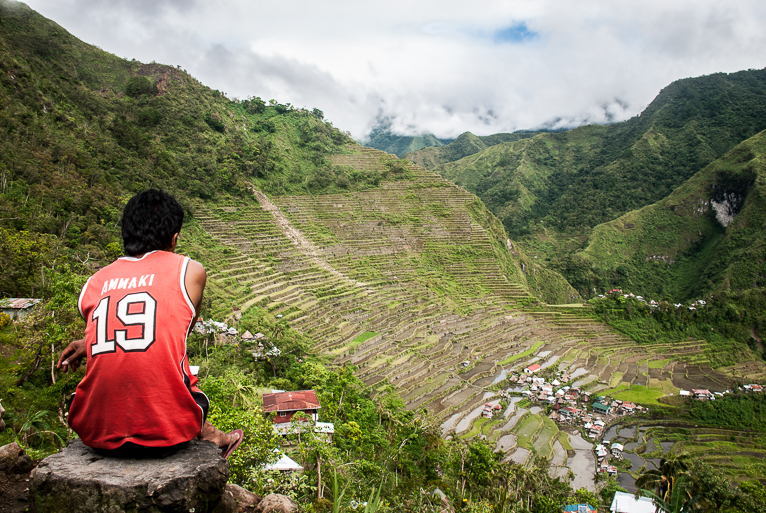 The end of the World War II marked the beginning of a tulmutuous period for Asia — a period of widespread, incredibly fast development.

I asked Rita how her village had changed during her life

She told me how the steadily increasing communications reaching the Ifugao from the larger Phillipine society (and world) was distracting people from their history and traditions.

As passionate as I am about history and tradition — and as much as I hate to see a rich culture slowly dissolve into our globally-connected world —  I find little mystery in their disappearance.

Many people get up in arms about this.

I used to feel that way too, but recently my mind has changed.

Well, to be specific they seek progress, but it doesn’t always work out that way.

Our society operates largely on the idea that we should be constantly working to build a better world and should be prepared to discard any of our own traditions that impede our progress.

I’m not saying I think we’ve done a particularly good job of building a better world, or that abandoning traditions is either wise or desirable.

I’m just saying that we tend to romanticize the traditions of others as unique and worthy of protection and while we rush to replace our own with newer and ‘better’ ones.

Nearly all societies strive to change. It’s the same reason that 2000 years ago the Ifugao farmers decided to pick up their stone axes and start carving these terraces out of the mountainside.

It’s what people have always done.

So why does it twist my stomach every time I encounter the a dying society?

After speaking for some time, Rita disappeared into her house and returned with folder containing a tattered old anthropology article. It explained that Rita was the last living practitioner of the traditional Ifugao weaving process. The document included photos of Rita harvesting vines from the jungle, stripping the fibres, spinning them into thread, and then weaving them into cloth on a simple handmade loom.

I asked her if she had taught anyone else her weaving method since the article had been written.

She told me that she had taught a man close to her age who lived in the next village over and laughed heartily as she explained how terrible he was at it, relishing her own singular mastery of the craft.

She was the last person in the world that could stroll into the jungle of the Cordillera mountains to collect vines and single-handedly transform them into an Ifugao alampay.

I asked her if she still made clothes.

She did not. She had given up weaving because of arthritis.

My friends returned from their walk. Rita and I said goodbye and I took a photo of her before we began climbing the steep path toward the potholed dirt road where we’d wait to flag down the next passing bus.

As we climbed the trail between the rows of thatched huts I noticed the laundry lines between them were adorned with jeans and basketball jerseys. A short time later we passed a group of teenagers huddled excitedly around an old cellphone.

Their eyes were all focussed on the tiny green-and-black flip screen and I was filled with an unsettling certainty that I had just witnessed some kind of vague injustice that had no definable perpetrator and of which no one seemed to feel they were a victim.

A version of this article originally appeared on The Liberty Project and has been republished here with permission.

6 thoughts on “The Last Ifugao Weaver of Batad”