You are here: Home > Blog > My Gypsy Family

Patrick and I had picked up a fellow wanderluster at the Canadian boarder. Ha had translucent skin and was tall and skinnier than my pinky finger with long shaggy hair and a malt liquor habit. He’d ride a skateboard everywhere if he could, carries a pen and paper for his art, and is always waiting for a bone to heal, a cut to scab, or a bruise to lose its color. One of those guys that wears a wool hat in the summertime because he’s cold, not because he’s a hipster. His hands are always stained with ink because he can’t stop drawing charicatures. They’re crude, but really good.

We lent him a down jacket, fed him and learned that he had never explored the coast — never played in the Red Woods or viewed the mountains from another mountain. This was the trip where my Gypsy Family was born. I had recently quit my jobbecause it made me unhappy, tired, and fat. I flew west from Baltimore with no plans other than to wander sunny California and explore the redwoods of Oregon with my friend Patrick.

“Sloan. Sloan.” Patrick’s voice was serious but excited. We were thinking the same thing. He has to come. Ethan is coming to Yosemite; the Gypsy family is staying together and we’re backpacking Yosemite.

It was something we had been planning on doing with Patrick’s friends from San Diego. Ethan hadn’t been considered for the trip, but why not? Why not bring a kid that runs out of breath walking from the truck to the grocery store? His summer plans consisted of having no plans. He was wandering between friends houses and his mother’s boyfriend’s house—he didn’t feel welcome anywhere. None of us really did. We wanted to let him explore what we knew was out there, show him what it’s like to spend a few days with out his skateboard and cell phone and leave behind accusation. The trees wouldn’t judge him.

With out telling Ethan we silently planned on him coming. We made room for him in the truck and borrowed gear for his wandering, broke ass. We were traveling with Patrick the sales man, so we had to follow his backwards travel schedule. We headed up to Mount Hood for him to work and to do a pre-Yosemite trial run. We had a group of seven. Jumping over snow and wading through rivers to a waterfall left my Gypsy Brother exhausted. When he discovered we had hiked 4 miles in, he realized we had to hike 4 miles out.

The nervousness on his face showed through his thin lips. He didn’t crack another smile for hours. He pulled his hat down low over his eyes and rolled his shirt sleeves up. His thin arms swam in the sleeves of the black Volcom t-shirt. Head down, arms pumping, Ethan led the group. He rounded the corners and cut the switchbacks before anyone else, no one could keep up. His only companion was Otto, who had the advantage of four legs instead of our two. Towards the end we all caught up and saw the look of accomplishment and satisfaction in Ethan’s face.

At this point Ethan still had no idea of the plans we had for him. Ethan got a taste of it at Mount Hood, but had yet to fully experience it.

It; The vastness, amazingness, hugeness, and incredibleness of looking at a mountain and hiking over it, around it, or through it. Stepping back and realizing just how small you are and how big this world is. Realizing that you can do it, you can go that far.

Fast forward to the morning we woke in Yosemite—Ethan, climbed out of the back of the truck already complaining of the cold while our two other friends made coffee and examined the cheap map the park had given us. Our daypacks were packed full of half peanut butter sandwiches, Lara Bars, not enough water, and Coors that quickly warmed as our hike began to the Ten Lakes.

12 miles, 15 tops for a round trip hike you guys. Patrick assured us he could read the map. All our trust was in the idea that this 15 mile hike would be over in time to grill our steaks, make a pot of chili, and drink cold beers when we got back. Five hours after my first swallow of water we sat on a rock ledge and sipped our warm Coors, each holding the can up to match depcition of the mountain on the can with the real thing. It didn’t matter that we weren’t looking at the Rockies that were represented on the Coors can. The mountains in front of us were spectacular. 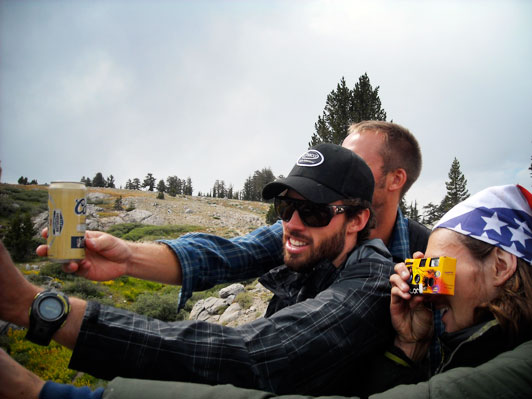 “Fucking sick man,” Ethan said under his breath, his Canadian accent barely audible. He was feeling it. I could see him forgetting about what he’d left behind in the city. He sees the world in front of him. He turned around and looked where we had come from and he faced forward and looked where we were going, what lay ahead for the rest of the day, for the rest of the summer, the year…

Our home and native land!

True patriot love in all thy sons command

Tired, hungry, thirsty and sick of being in the woods, Ethan did the only thing he could think of to lift our spirits, he sang. He sang a song that none of us knew and made us laugh when his voice cracked. He only knew the first few lines. Hours passed after the sun had set. We had two headlamps between five hikers. We continued singing: Christmas carols, 90’s pop, Backstreet Boys, folk songs, jingles from our favorite commercials… we began feeding off one another’s energy.

We also took turns feeling too weak to go on, too tired to care if we ever made it out, and sometimes so negative about the situation that we wanted to sit on a rock, pray we didn’t freeze to death, and sleep until the sun rose again. But then we’d remember how amazing the lakes looked and push on. Someone would bring up the fact that we had steak to grill upon return to the campsite, we had left cold beers in the cooler. Camp was near, we could taste it. We’d sing another song, a goofier, stupider song to get us around the next switch back. We were a team pushing through the night to make it out healthy and alive. Well, at least alive.

Ethan led us for many miles. His confidence from having discovered the wilderness and appreciating the beauty of nature pushed him forward. I watched him transform from a street kid with no ambition to a guy that wanted to learn about hiking shoes and why hikers wear wool socks instead of cotton.

I watched a kid begin to care about where he was in the world and what he was doing. The double miles of our hike made the beer that much colder and the steak that much more tender. After a full day day and half the night in the woods we sat down to a meal and reminisced about we had just done. We’d come full circle back to the campsite and were already laughing about what had just happened. 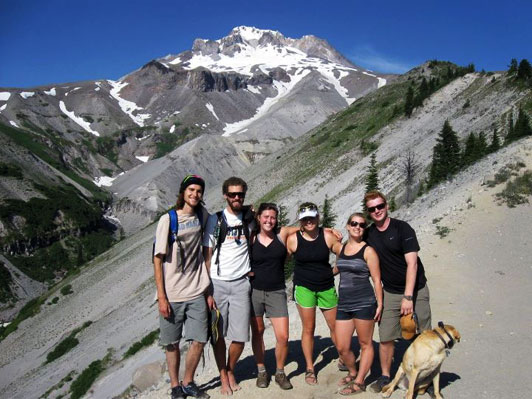