Painted Thrice and the Circle Turned: A Glimpse of Peacefest 2008

You are here: Home > Blog > Painted Thrice and the Circle Turned: A Glimpse of Peacefest 2008 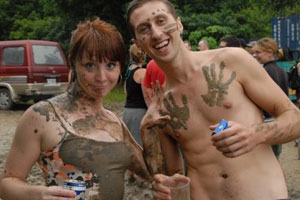 It had rained lightly and steadily for three days on the festival grounds, a small grassy plateau high in the mountains of Taoyuan County. The dance floor, if you could call it that, was a flat formerly grassy area blanketed in four inches of mud.

We all danced in the mud and rain a frolicking mess of festival hippies. Everybody was happy despite the cold mud and rain. In fact, it seemed that the crowd was happier because of it. It made us feel earthy – animal – and because of it we were allowed to act less human and more like animals. Everyone was drinking and smoking steadily and that helped too. As the weekend progressed, we collectively became more and more muddy and animal-like until around three a.m. on Sunday when in our sleep deprived, weather-beaten, alcohol fueled delirium we became animals. But that passed quickly and in the morning when the sun came out everyone became human again and quietly packed up returned to their human homes and showers and televisions.

I was dancing to Militant Hippi who were playing a fusion of hip-hop, ska and reggae. It was a good fusion of hip-hop, ska and reggae. I know it was good because I rarely listen to ska or reggae but I enjoyed their show immensely. It was 7pm and the party was well underway. A large proportion of the three hundred or so attendees were already caked in mud.

Because of the rain and mud I had shed my shirt and shoes and wore only a pair of shorts. I was having a wonderful time flinging my body around the mass of gyrating flesh sweat rain and mud. I was smiling absently and must have looked very friendly because many strangers talked to me. Several of them told me that I should paint my chest with mud. Finally one woman that I knew from Tainan bent over and immersed her hands in the mud and then stood up and slapped them on my chest, one on each breast, if men can be said to have breasts.

That was the first time that I was painted.

The second time it was a Norse looking woman, short with blonde hair and freckled skin. I had been watching her and was attracted to her and when I had first spoken to her earlier in the evening she only spoke to me in Chinese. But since she was a beginner to Chinese she began speaking to me in English soon after. We were dancing together when the music stopped or, rather, Millitant Hippi finished their set with a long drum solo and the singer, a man that they call Boston Paul, leapt off the stage and slid on his belly in the mud through the crowd.

With the music suddenly gone, and nothing to do, the Norse-looking woman asked if she could paint me. “Of course,” I replied. She was an artist. I knew because she had told me earlier. She had actually designed Millitant Hippie’s album cover, and many other bands’ album covers as well. I would have said yes even if she wasn’t an artist and I wasn’t attracted to her, but those things helped.

She dipped her hands daintily in the mud and began by carefully dotting my forehead, and then drawing a line on one cheek. Then she stopped and wiped away some of the dots with her thumb, like a mother wiping a mark off of a child’s face, and then continued painting. She apologized when she stopped to erase the mistake, but she didn’t need to.

She took my hand and pulled me over to the side of the stage. At the side of the stage she showed me her painting kit. It was a small palette that looked like the watercolors that you used in elementary school, a blue flat rectangular box with a clear plastic lid through which you could see two rows of multicolored circles inside. But instead of water colors her kit contained pastes that she dabbed and stroked with a q-tip onto my face. I never saw what she painted (until today when I was browsing people’s photos of the festival on Facebook) but I received many compliments for it.

We talked as she painted. She was from a town very close to my hometown in Canada. I became quite absorbed in the conversation about towns and lakes and mountains that we both knew and I was startled when put her finger to my lips and told me, “Shhh. I think they’re having a moment of silence.”

Everybody was silent, the band, the crowd, everyone. I looked around confused and slightly awed. Onstage the band, a band of dark aboriginal people, stood like statues behind their instruments. There was a large circle of people on the dance floor, if you could call it that, holding hands with their heads bowed.

After what felt like a very long time the statue standing onstage behind the didgeridoo tilted its head forward ever so slightly so that its mouth rested inside of the long wooden instrument. A low groan grew slowly in the air – long and low and steady and increasing in volume until, after what felt like a long time, a drum beat, also low and slow and steady, thumped out from the stage and carried solidly through the crowd, growing weaker as it traveled, eventually dissipating somewhere in the rain filled air above the green valley that stretched out like a giant yawning mouth below our plateau.

Then the circle began to turn, everyone chanting. We stood at the side of the stage watching slightly confused but happy and content. I later found out that the circle was the peace circle and that they have it every year at Peacefest (this was my first year). The silence was for all of the people suffering in the world. The circle was the physical manifestation of the meaning of Peacefest; the money that it collected for various charities, the volunteers that organized it, and the general goodwill that one felt during the festival.

The circle was the philosophical epitome of Peacefest, and I found out all of the reasons why later, but nobody had to tell me; I already knew it as I stood shirtless in the rain, thrice painted, watching the circle turn.

1 thought on “Painted Thrice and the Circle Turned: A Glimpse of Peacefest 2008”