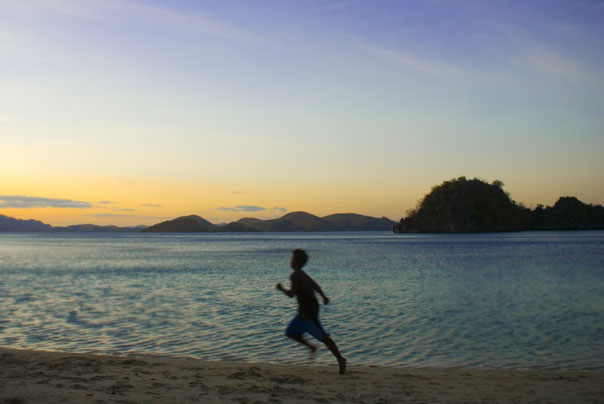 To escape the suffocating traffic and staccato of firecrackers that besiege Taiwan every Chinese New Year, several friends and I booked tickets on a budget carrier, Spirit of Manila, to the city of Coron on Busuanga Island in the Philippines for five days of snorkeling, island hopping, and rum drinking.  The tickets were very cheap, about USD$200 round-trip.  In the end the trip only cost me about $USD650, including a shopping trip in Manila on the way home. For further travel information and great accommodation deals visit Manila hotels.

It’s worth noting that Busuanga wasn’t the only highlight of the trip.  During a layover in Manila on the first night I was fortunate enough to referee a midget boxing match in a local strip bar.

We arrived and found our room, a stick and thatched grass cottage on stilts over the water with a bar and sunset view. Five of us split it for about USD$30 per night. Our arrival celebration that night resulted in several scrapes and bruises from wrestling, one very large angry Swede with a broken cell phone, and several empty bottles of Tanduay (the cheap local rum).

We went island hopping for the day on a traditional banca boat, a slender vessel with bamboo pontoons.  The seas and islands around Busuanga contain some of the finest dive sites in the world, partially because of numerous wrecks from a Japanese supply fleet sunk during WWII. There are 12 diveable wrecks within a day’s boat ride from Busuanga in addition to the famous Barracuda Lake and Cathedral Cave dive sites.  On Day 2 we snorkeled the Skeleton Wreck which was just 5m deep—shallow enough for me to dive down and swim through it.

Most of us took the day off.  I worked on an article about blogging for TransitionsAbroad.com.  That evening we planned a two-day island-hopping trip we would take with a local guide.

We woke up to a breakfast of fruit shakes, Tanduay, and Extra Joss (a Philipino energy booster illegal in most Western countries) and found our way to the docks to hop on our banca boat where we started drinking the beer because, well, drinking straight rum all day long just plain excessive, and also a mild safety hazard when you’re planning to swim.

The first site we snorkeled was a reef around a jagged limestone rock rising about 20m out of the narrows between islands.  The reef was lush and colorful and swarming with fish.  The current, however, was very strong and many of us returned to the boat after just 20 or 30 minutes.

Afterwards we moved on to Cayangan Lake on Coron Island.  The cove where we docked was spectacular (pictures below).  A short steep hike over a small pass lead us to the freshwater lake where we spent the afternoon swimming and taking goofy pictures.

That evening we headed for a small private beach where would camp.  As we approached the beach we were overtaken by another banca boat with foreigners on it.  It landed on the beach a few minutes ahead of us. We were upset that these tourists had spoiled our private paradise; we decided that the most appropriate course of action would be to consume large quantities of rum, talk loudly, and wrestle each other in the sand until the invaders either joined us or fled in fear.

As the banca pulled up to the shore I heard somebody shout, “Matt”.  On the beach I saw Rose, a friend from Tainan.  All of the foreigners on the beach were our friends, English teachers, from the city where we lived in Taiwan.

That night we drank rum on the beach and talked by candlelight under a shimmering dome of stars.  The ocean glittered with phosphorescence.  When we swam we were adrift in a symphony of light.

Day 5 was quiet. We visited the famous Barracuda Lake, where the limestone rock formations flicker up from the earth in sharp spiny formations. The rocks are impossible to walk on without shoes and look enormous cathedrals of stone flames.  Underwater the walls of the lake look like vast intricate underwater cities.

That evening we ate our last supper in Coron, and the next morning flew home.

Every week we hand-pick the best deals from around the web and deliver you up to 80% off your favorite brands like Patagonia, North Face, and Arc'teryx
Tweet
Pin361
Share
361 Shares