You are here: Home > Blog > Midget Boxing in Manila 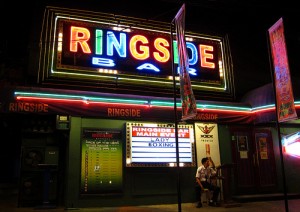 “Who’s the winner?” The tattooed Filipino man holding the microphone asked me.

I couldn’t make up my mind.  Neither midget had tried very hard. As far as I was concerned the whole fight was a sham.  But everyone in the bar, which included seven drunk tourists, thirty bored-looking strippers, one greasy Filipino announcer, and two midgets wearing boxing gloves the size of their heads, was staring at me.  I had to make a decision. I was the referee.

I bent over and grabbed the glove of the shorter of the two midgets and lifted it over his head.

“The winner,” the announcer shouted into the microphone.

When I told my friends about the experience later they were jealous.  “How was it?” They wanted to know.

I can tell you this about refereeing a midget boxing match in a Manila strip club: it’s not as glamorous as it sounds.

“How did you get to do it?” They wanted to know.

The simple answer is this: I didn’t do anything.

That answer, however, didn’t satisfy my friends.  They demanded I explain how it came about that I, the “lucky bastard”, had the good fortune to stand in a boxing ring with two three-foot tall men hitting each other in the face for the amusement of a handful of drunk backpackers. It had nothing to do with good fortune.  It was a scam.

This is how it happened:

Some Filipino friends had brought my girlfriend Catherine, our friend Sarah, and I, to the red light district of Makati, a seedy strip of convenience stores, street prostitutes, and strip bars, for our only night in Manila. They brought us to a bar called Ringside to see what the marquee advertised as “Lady Boxing and Midget Oil Wrestling”.

The inside of the bar was dark, lit mainly by neon beer advertisements, with booths surrounding a realistic looking boxing ring in the center of the room.  There were only two or three other patrons sitting on the far side of the bar, all of whom were men. It wasn’t surprising the business was slow. It was Thursday night. What was surprising was the number of bikini wearing bar girls.  There were at least thirty. Several were talking to the men on the other side of the bar.

We all ordered drinks for about 250 pesos ($6.50 USD) each, which was expensive considering there are places where you can buy an entire bottle of rum for nearly one-tenth of that price. The price made it clear that it was not a bar for locals.  It was for tourists only. The way the girls were talked to the male patrons made it was clear that they had a price too.

We didn’t want to party.  We were tired from traveling all day. We didn’t want to stay out late much because we needed to get up early in the morning to catch a flight.  We had only come to see the show. So, when our drinks arrived, we sipped them slowly, killing time, waiting for the show.

As we waited, a masculine-looking Filipino woman came and stood behind Catherine in the booth.  She started to talk to Catherine and, after a moment, asked Catherine if she would mind a massage.  Before Catherine could answer, the husky mustached woman, who had several homemade tattoos on her arm, began rubbing her shoulders.  She was polite and friendly.  She told that she worked as a boxer, used to be a bar girl, and had spent time in jail for beating up her boyfriend.  She was scary.

The waitress asked Catherine if she would like to buy her manly masseuse a drink and Catherine agreed. That was the hustle. Girlie bars across Asia almost universally employ this scam. Girls talk to customers, and customers buy the girls drinks that cost much more than the customer’s drinks. The girls are paid a commission for the drinks they hustle.  The drink Catherine had just bought would probably cost around $400 pesos ($9 USD), more than the price of a modest room in a hostel. Catherine, however, didn’t know this. This was her first trip in Asia. Catherine hadn’t traveled much before and I was proud to see her on the receiving end of her first tourist scam.  It was kind of like her indoctrination into our tribe of travelers.  Now she was one of us.

Now that I think of it that way, it sounds kind of funny. My girlfriend was being hustled by a Filipino ex-convict prostitute, and I thought it was cute.

Most tourist scams operate on a simple principle: make the tourist feel obligated to give you money.  Shame him into paying.  Be overly friendly.  Offer help.  Assume the role of guide.  Hail a taxi.  Give her a massage. Then ask for money or, in this case, a drink.

Since our table comprised nearly half of the customers in the bar, I thought it likely that we would be on the receiving end of some kind of hustle beyond the usually girls-for-drinks maneuver.

After waiting a while, and seeing no indication that a fight would take place, I asked Catherine’s friend if there would be any boxing.  She told us there would. It was a special night. We would get to see midget boxing. Then she shouted at the only male Filipino in the bar, a middle-aged man with greased back hair and a shirt unbuttoned to his naval.  He came over.  “You want to see midget boxing?” He asked me.

“You want to buy them some drinks?”

“Come on. They work hard.  You buy them some drinks.”

“You don’t think they work hard?” He asked.  I didn’t reply.

“Come on man.  Just buy them some drinks.”

He shook his head and walked away, disgusted.

The man came back several times. Each time we repeated our conversation. Then he took a different approach.  He walked up to me.

“You want to be referee, friend?”

“Come on buddy. We need a referee.”

Everyone was looking at me.

A moment later, I was in the ring with two men whose heads barely reached my waist.  They each high-fived me.  The greasy announcer introduced them.  When announced, the first did a cartwheel, and the second jumped in the air and kicked himself in the head with both feet.  Then they went to their corners, the bell rang, and the fight was on.

Mostly I just stood here leaning on the ropes and drinking my beer.  Like I said before, the fight wasn’t very exciting.  When one of the midgets went down, I’d get down on one knee and do an exaggerated ten count (as you can see in the video taken by my friend, below).

Finally, after several boring rounds, I was asked to choose the winner.

Then the announcer asked me, “How did they do?” He held the microphone to my mouth.

“So,” he continued, “you will buy the fighters some drinks, for their great job?”

Everyone was silent.  The midgets were both looking at me. It seemed like everyone had stopped what they were doing and was staring at me.  He held the mike to my mouth.

If I said no, I would basically be insulting the midgets to their faces and I would look like a cheapskate in front of everyone.  This was the hustle. I did a fast calculation. If the drinks cost 400 pesos each ($9 USD).  Six drinks each would cost nearly $110 USD. Was that worth insulting the midgets and losing face in front of thirty scantily clad Filipino prostitutes?

“No.” I climbed out of the ring and walked back to the table.

“That asshole!” Said my girlfriend. “He knew you didn’t want to buy the drinks, and then he did that!”

A couple of minutes later the midgets came over shook my hand to show that there were no hard feelings. It seemed like they knew I was being pressured unwillingly. They were so gracious that after they left I called the waitress and asked her to take them a couple of beers.

My travels in third world Asia may have made me good at resisting all manner of scams, but I think I’ll always be a sucker for good ‘ol fashioned decency.

13 thoughts on “Midget Boxing in Manila”