You are here: Home > Blog > A Snowboarder on Alta 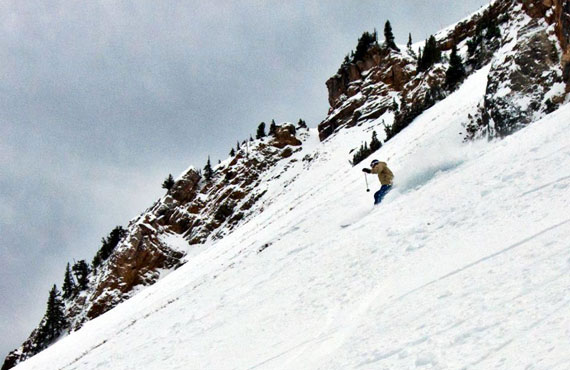 When I first moved to Utah I was appalled to learn that there are two ski resorts here that don’t allow snowboarders: Alta and Deer Valley.

I was also intrigued.

Alta, one of the oldest hills in North America, is regularly featured on lists of the best ski resorts in in the United States. It’s referred to by many skiers as the mecca of the sport. It’s also a source of tension among local skiers and snowboarders, as can be clearly seen in the video Sh*t Alta Skiers Say About Snowboarding.

When I found out about Alta’s policy, I knew I had to find out what it was about this hill that created such devotion among pass holders and why the management felt it necessary to prevent snowboarders from sharing the hill.

In order to slip by unnoticed as a snowboarder on Alta, I needed camouflage; namely, a pair of skis. So I headed down to Ski ‘n See (a partner of Utah Skis) and picked up a pair for a day.

I had skied from the age of three until I was thirteen when I discovered snowboarding and gave up skis forever (or so I thought). So, when I stepped into my bindings last Saturday, it was the first time I’d worn skis in 20 years. 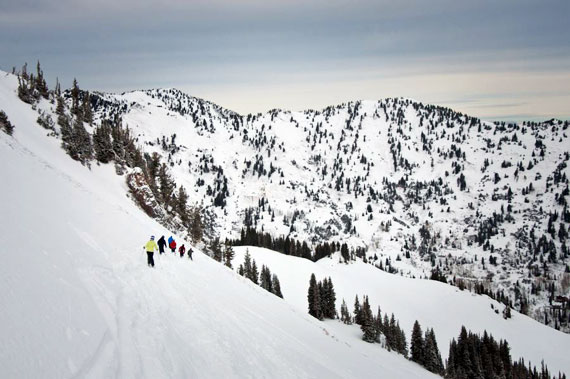 I made plans to meet the editor of First Tracks Online Ski Magazine and longtime Alta devotee Marc Guido, and ski writer, Kristen Lummis, who also blogs at with me for Liftopia as well as her own site, Brave Ski Mom. They were going to show me the hill, explain it’s legendary attraction and, hopefully, explain to me the reasons why a ski hill would choose to alienate half of their potential lift ticket buyers.

There was just one problem. They were serious skiers, and we were on a serious mountain. Back in my skiing days I wouldn’t have thought twice about my abilities. But after 20 years on a snowboard, I was worried that I wouldn’t be able to keep up.

When I arrived Marc was in the lodge and Kristen was waiting for a ski company rep to bring her some skis to try out, so I decided to take a warm up run alone. It was pitiful. I was leaning way back on my skis, which is exhausting for your legs and makes it hard to turn. I didn’t make a turn that felt good until I was nearly at the bottom of the hill — not a good sign at the beginning of a day with a crew that is loathe to set their edges into anything less challenging than a black or double-black diamond run unless it’s the only way to get to the next steep powder line. 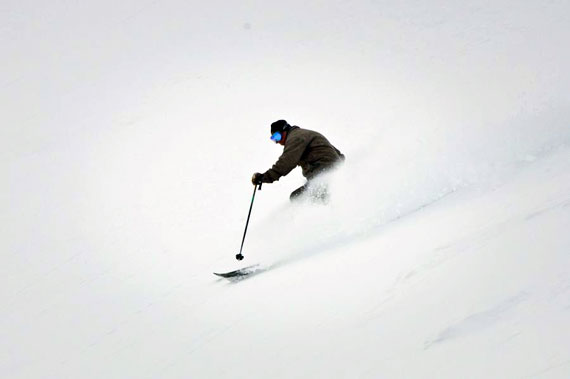 Knowing my inexperience, the gang took it easy on me. We cruised down the same blue square run I had already tried. Then about halfway down we ducked off into the trees where there was a short, steep pitch. This was a test. If I could do this, we’d be headed for the steeps next.

I made it down, barely. But, it was enough to convince my hosts that they could take me anywhere they wanted to go.

It surprised the hell out of me. I was exhausting myself trying to stay up in the steep powder, but I was thrilled that I was able to do it.

It was time to see what was so special about the skier’s mountain. 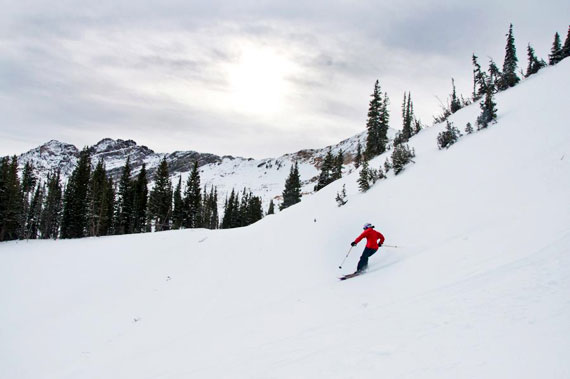 ALTA = A Lot of Traversing Around

On the chair Marc, who had skied almost exclusively at Alta for most of a decade, told us, “Alta stands for ‘A Lot of Traversing Around’.” It was true. Most of the parts of the hill that we went to in search of untracked snow required very long traverses. At least one-third of our on-snow time was spent crossing the hill on trails.

On the chair I asked Marc and Kristen why Alta didn’t allow snowboarders. Knowing that I’m a snowboarder — and writer — they spoke carefully.

One of Marc’s friends explained that even if snowboarders were allowed on Alta, they wouldn’t really enjoy it because of all the traversing. Traversing is, after all, easier on skis.

I had to agree, most snowboarders, would not enjoy traversing across the mountain.

On the other hand, I thought, the same logic could be applied to skiers. I don’t know any skiers who traverse for for fun.

There was one spot on a traverse that day where we had to side-step a few feet up the hill to stay on the path. If I encountered that spot on a snowboard I would have simply frog hopped up the hill, which is a bit more work than climbing on skis, but it’s not prohibitively difficult. We also came to one hill on a road that we had to skate up. If I were on a snowboard I would have had to unstrap my back foot and push for a minute, which is never fun, but is also not a big deal.

So, I could not accept their reasoning as justification for not allowing snowboarders on Alta. 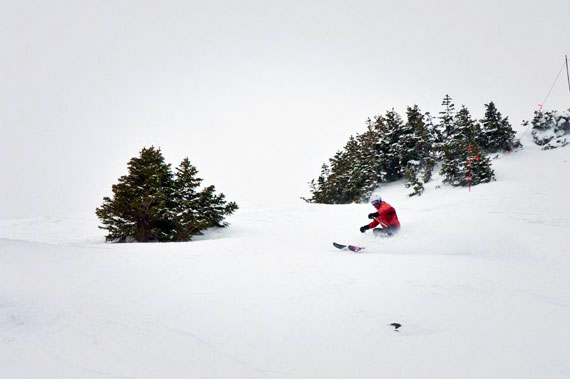 Toward the end of the day, Kristen asked me, “After skiing here, what do you think about snowboarders not being allowed on Alta.”

I thought for a moment, and then replied, “I really don’t care.”

There are 11 ski hills within an hour’s drive of Salt Lake City. Who cares if Alta doesn’t allow snowboarders?

Is it fair? Not really.

Does it matter in any meaningful way? Hell no.

In the USA we’ve got kids walking shooting kids in school, millions of people living without health insurance, a fiscal cliff, and a looming global financial crisis. I can not justify wasting the calories that I’d burn caring whether or not Alta allows snowboarders on the hill. I could snowboard the rest of my life in this Utah without giving it another thought.

Although I don’t mind the fact that Alta will not allow me to bring my snowboard on their hill, I am however, very interested Alta’s ban on boarders as a unique phenomenon in North American alpine culture.

Marc, who is originally from the East Coast, told me something surprising about Mad River Glen, a ski area in Vermont that also bans snowboarders: it’s owned by a co-op of aging former hippie types. “They’ll never lift the ban” He assured me.

This struck me as odd. The scene at Alta was similar to that he described in Vermont. Alta wasn’t run by a bunch of rich prissy skiers living in some elitist fantasy like I’d expected. Alta skiers were cool. Many of them were young. It was actually less stuck-up than many of the other big-name resorts I’d been to in the past. I skied past more than one group of skiers holding a ‘safety meeting’ in the bush that day. The vibe was undeniably chill.

It was the best day on the hill I’d had in a very long time.

Why would the down-to-earth fun-loving folks like these want to close off their hill to others?

I don’t have an answer yet, but I will.

The investigation will continue.

Special thanks to  to Ski ‘n See, Utah Skis, and the Ski Utah Yeti for helping me to make this day happen.

7 thoughts on “A Snowboarder on Alta”