You are here: Home > Blog > The Coolest Places to Surf in South Africa 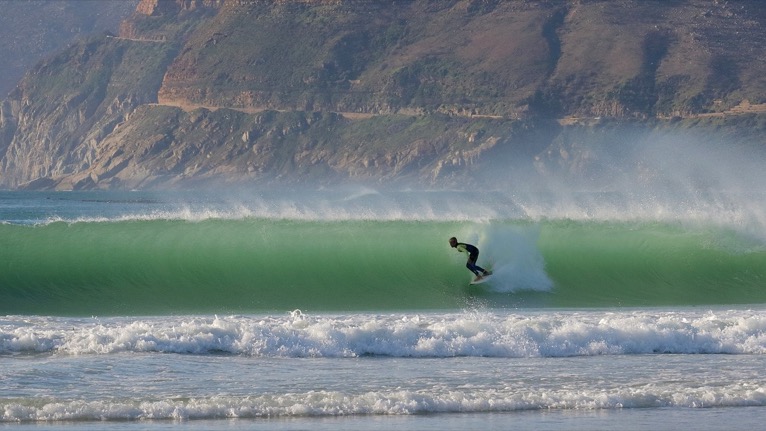 For surfers, South Africa is the holy grail. Thousands of uncrowded bays and point breaks receive Atlantic and Indian Ocean swells in all seasons. It’s home to the iconic Supertubes point break, which holds a spot on the World Surf League (WSL) championship tour and is ranked among the top three waves in the world. However, Supertubes isn’t the only world-class wave in South Africa — the country is teeming with them.

With epic waves comes surfers, and with surfers comes cool surf towns. These are some of the coolest places to book one of many luxury retreats in South Africa and surf until your arms feel like noodles.

The waves of Durban, South Africa, groomed local hero Shaun Tomson into the world champion of surfing, and they’re bound to help your cutback too. The Indian Ocean waters tend to be warmer here, making it more inviting for surfers of all skill levels. However, beginners will want to remain on the typically smaller southern breaks, as Durban is no stranger to big waves. Often referred to as the “Bay of Plenty,” there are enough waves to go around in this coastal town.

Durban is also an ideal town to visit if you’re traveling with non-surfers or your arms are burned out from too much paddling. You can people watch and snack at local food stands along the Golden Mile promenade, visit the scenic Valley of 1,000 Hills or get up-close-and-personal with African animals at the Phezulu Safari Park.

Head a couple hours north of Cape Town, roughly 220 kilometers, and you’ll arrive at the West Coast town of Elands Bay. This spot is best when the famous left-hand point break is cranking with a westerly swell and southeast winds. Surfing and soaking in the rugged beauty are the most popular things to do here, but hiking, off-roading, exploring rock art caves and venturing onto the waterways by boat are ideal ways to occupy days when the ocean is flat (typically few and far between). Cruise by the Vensterklip Farm Pub to enjoy your after-surf beer in the cozy pub nestled inside a 300-year-old barn.

It’s said that the earliest recorded wave surfed in Muizenberg was in 1919, which is why it has been dubbed the “birthplace of South African surfing.” National Geographic also named it one of the top 20 surf towns in the world. That’s because in addition to offering two quality reef breaks in the immediate area, it’s also home to Surfer’s Corner, a mellow beach break that’s popular for swimming and learning to surf. The biggest swells typically come from the northwest during the winter months, but rent a longboard, and you can surf almost every day of the year.

It’s no wonder this coastal suburb of Cape Town is ranked among the top surf towns in the world. Muzies, as its known among locals, is home to a long list of iconic restaurants, like Tiger’s Milk at Surfers Corner, and plenty of places to sleep with sea views and ocean breezes. Known for its music, art, food, coffee and historic surf shops, Muizenberg is a must-visit South African surf town.

The World Surf League’s annual J-Bay Open is held at Jeffreys Bay’s iconic Supertubes break. It’s known for offering one of the most consistent tubes in the world, and experienced surfers travel from around the world to experience the sensation of getting barreled here. J-Bay is also home to a local surf population and the coastline is littered with famous surf breaks (in addition to Supertubes), including Impossibles, The Point, Salad Bowls, Boneyards and more.

An abundance of surf shops and schools, including a Quiksilver and Roxy Factory Shop, embolden the local surfing vibe, and a variety of villas and retreats have been designed specifically to accommodate surfers.  The town also offers a variety of shops offering locally-crafted goods, beachy restaurants and all of the makings of a true surf destination. For many surfers, J-Bay is the ultimate bucket-list destination.

This small resort town on the south coast of South Africa is the heart of the “Wild Coast,” a long stretch of coastline littered with regionally famous surf spots. Breezy Point, or Ntlonyana, is one of the most consistent point breaks in the area, but there’s no shortage of surf wherever you find yourself along the rugged coastline.

In fact, Port Edward is known for some of the most naturally beautiful scenery in the world. Take some time out of the water to visit the Port Edward Lighthouse, hike the trails in the Umtamvuna Nature Reserve, catch a sunset at Mtentu Beach, mountain bike the Clearwater trails and visit the smallest desert in the world at the Red Desert Nature Conservation Area. The opportunities for adventure in and out of the water are endless here, which is why this area can easily suck you in and occupy your entire holiday.

South Africa’s roughly 2,800 kilometers of coastline is home to more world-class waves and must-visit beach towns that most countries triple its size. Complete beginners can take lessons on small, sand-bottom beach breaks while seasoned veterans get tubed in J-Bay. It doesn’t matter what level of surfer you are, you’ll need at least a few weeks to cruise the South African coastline and uncover all of the cool surf towns it has to offer.

6 thoughts on “The Coolest Places to Surf in South Africa”