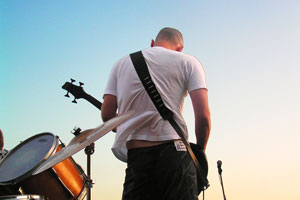 What’s New?
Now in it’s sixth year, Tainan’s annual music festival, the May Jam, is expanding in all directions. This year’s May Jam will feature a host of new attractions such as: multimedia releases and international musical acts, as well as drama, comedy, and drumming.

So that no one, even those unable to attend, don’t have to miss out video cameras will be on premises filming the two-day fiasco for the first-ever May Jam DVD. An audio recording will also be made for the release of a May Jam compilation CD.

International artist Chekov from Germany and The Jet Leggers from Seattle will be making the long flight to Taiwan to play marking the Jam’s first international acts. As a run up to the jam The Jet Leggers will be playing gigs in Tainan and Kaohsiung almost every day of the preceding week.

This year’s Jam will sport its largest percussion section ever featuring The Dragonfly Jamboree, The Tainan Drum Circle, and the 06 Drum Band.

Though performing arts have been included in the jam in the past, this year will see the most diverse selection of performances and artists to date including: comedians, a bilingual (Chinese-English), Shakespearean rendition, and a performance by Kaohsiung’s Mindful Pheonix group.

As for not-so-new events: May Jam t-shirts will be on sale for the nearly profitless price of $250 NT and, of course, the caravan of greasy food and cheap trinket stands that accompany all public gatherings in Taiwan will be present.

The Acts
The two-day, Anping rockfest will, of course, still focus on music with a solid line-up of performers. Some of the highlights will include:
The Jet Leggers – Imported American rock and roll from Seattle, rumored to be performing with a special guest.
Charlie Swiggs – Long-standing local trio will perform their patented brand of wacky, tri-lingual, funk-rock.
Chekov – Jazz and funk infused electronic soundscapesd.
Tsunami – Taiwan’s hardest Brit-rockers from Koahsiung.
Unfinished – All original jazz, blues, and folk influenced melodies from their new CD Shades of Blue.
Keyin – Straight from Tainan’s notorious Westside Keyin throws down mad funky hip-hop stylings.
6th Man – Long-running Tainan jazz quintet.
The Stick Men — Straight up rock n’ roll covers from this Tainan trio.
Percussion performances by The Dragonfly Jamboree, The Tainan Drum Circle, and the 06 Drum Band.

An Unfortunate Maybe
This year’s show may also be host to an unfortunate first. In the past this outdoor festival has always been postponed for sour weather, but, this year, if the oceanside festival cannot be held on the slated dates April 30th and May 1st, it will not be held at all. Jam organizer, Axel Schunn, cites the economic difficulties of delaying the Jam in past years as the reason for this change.

However, as a pre-emptive strike against any party-crashing typhoons, The Jet Leggers will host May Jam pre-parties at Alice Bar in Koahsiung on May 22nd, and at the Armory in Tainan on May 23rd, to ensure in advance that the weather cannot foul the event entirely.

Where and When
The May Jam will be located in Anping on Yu Guang Rd next to Cho Mao Yuen Park.
Acts will run non-stop from noon to 10 pm on Saturday April 30th and Sunday May 1st.
Admission is, as always, free.
For more information see: http://www2.eecs.stut.edu.tw/~charlie