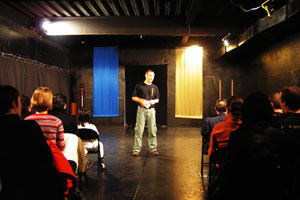 This ‘extreme’ sport trend is ridiculous. People do the stupidest things just to call them extreme; like the attention desperate weirdoes of the Extreme Ironing Bureau who travel the globe ironing their slacks in exotic locales.

The ‘extreme’ label has degenerated into little more than a last ditch attempt for social outcasts to attach some sort of coolness to their lame hobby. So, when I was asked to write an article about Extreme Theatre I expected to spend a day with a bunch of drama drop outs in a pathetic attempt to make some stupid play seem ‘dangerous’.

I was wrong. You make a play extreme by creating and staging it excessively quickly with next to no resources. Extreme Theatre performances are conceptualized, prepared, and performed in 24 hours with a budget of $500 NT.

At nine o’clock Friday night playwrights draw participants’ names from a hat. These are their actors. Then they draw one setting, (ours was a rooftop), one prop (we got a ‘Legends of the Fall’ poster), and an event or character (we scored a pacifist). The playwright then sits down with a big bottle of wine, mourns his bad luck in drawing such banal components and bad actors, and sits up all night writing a one-act work of spontaneous mediocrity.

Your correspondent was, as a writer, very impressed with the quality of the scripts that emerged from this process. Though not without faults, the scripts were generally witty, well paced, and entertaining.

I arrived at noon on Saturday (the deadline for playwrights to hand over their products) to meet my dramatic cohorts. Our director/lead actor assigned us parts from the script and we started reading. Our play, titled Johnny Ross and the Great Tofurkey Escape, was nine pages long and I had a main part. Eight hours till show time and I was already freaking out. How would I memorize so many lines? I can’t even remember the names of half the kids in classes I’ve taught for six months!

My sentiments had changed little eight hours of rehearsal and several beer later as I stood behind the black curtain, nervously gulping a Tsing-Tao Draft, with our Legends of the Fall poster, a salad of leaves from the dirty bushes in the street outside, and a tofurkey (tofu turkey substitute) hastily constructed from a loaf of bread and two breadsticks.

We stepped out into the lights where, as they say, the talentless, drunk reporters are separated from the dramatists–and separated we were. I won’t discuss the particulars, but only say that my dramatic companions handled the ‘situation’ with grace and talent.

Surprisingly, the rest of the performances were very good. They were humorous, entertaining, well acted, and the audience erupted with sincere applause at the end of each.

After waking from my stupor and contemplating the whole production, I developed a new respect for the dramatists who put on such an entertaining production with so few resources. It’s not as challenging as, say, ironing green polyester slacks on a riding lawnmower in the desert, but it’s pretty hard.

Where and When
Mindful Phoenix puts on performances, Extreme Theatre and otherwise, about once a month. Members’ admission is free and non-members pay $200NT at the door.
Address: 2F 165 Jung Jeng 2nd Rd., Shin Shing
Phone: (07) 223-0581
www.mindfulpheonix.com