You are here: Home > Blog > Don’t Forget Your Backyard

In an age where outdoors experiences have become commodities to sell, top ten lists comprise one third of magazine articles, and a large proportion of climbers refer to themselves as peakbaggers, implying that once a mountain has been summited there’s no reason to climb it again, it’s easy to forget that the ‘best’ or ‘highest’ peaks do not necessarily result in the best experiences.

Quite the opposite is true. It’s often the trips that happen spontaneously — the ones where expectations are low that are taken with good friends just for the hell of it — that turn out best.

I’m an outdoors and travel writer, so I’ve spent a lot of time hopping around the globe searching for ‘best’ experiences to write about (we journalists strangely feel that if something isn’t the biggest, best, or longest, it’s not worth writing about). I can’t claim to be hard core climber, but when I climb mountains, I try to go big. I climbed Jade Mountain in Taiwan (said to be the tallest in East Asia) and Angel’s Landing in Zion National Park and those were great experiences.

They don’t compare, however, to the time that I climbed Fisher’s Peak, near my home in Cranbrook B.C.

It was a trip planned on whim, the evening before the ascent. I was home visiting my family between trips to the Philippines and Utah. The conversation turned to Fisher’s Peak, a well-known local climb that I had, for some reason, never done. So, my girlfriend Emilie, my brother, and I decided that we would do it the next day. If we left early, we’d be able to be back before dark.

Emilie didn’t know my family well, and I hadn’t seen my brother in over a year. As we climbed toward the peak, my brother and I caught up on old news, and he got to know Emilie.

All day, we saw just one other hiker on the trail, a woman with her dogs.

That is what hiking is meant to be — quality time with people you enjoy in a beautiful place.

When I climbed Jade Mountain, we were in a rush to stay ahead of the pack of climbers we knew was behind us. We were on a one-day permit, so we didn’t have time to meander around, explore, and simply enjoy the experience.

When I climbed Angel’s Landing I was on a trail with hundreds of others, having to stop ever few minutes to edge by somebody on their way down.

Although they were great experiences, they can’t compare to what I experienced that day on Fisher’s Peak.

And, sometimes, you end up someplace just as beautiful as those considered the ‘biggest’ and ‘best’.

If you don’t believe me, check out more of the photos I took on Fisher’s Peak. 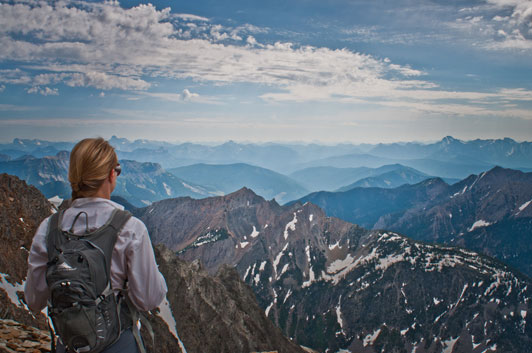 Every week we hand-pick the best deals from around the web and deliver you up to 80% off your favorite brands like Patagonia, North Face, and Arc'teryx
Tweet
Pin1
Share
1 Shares

4 thoughts on “Don’t Forget Your Backyard”