You are here: Home > Blog > Hiking to Angel’s Landing 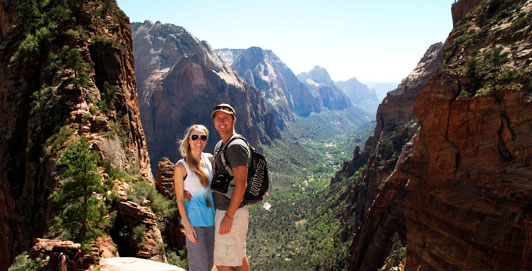 The hike to Angel’s Landing (formerly known as the Temple of Aeolus) is well-known as being one of the most spectacular hikes in Zion National Park in Utah, which places it among the most beautiful hikes in the world. However, it’s also one of the most dangerous.

The trail to Angel’s Landing is only 3.9 kilometres (2.4 miles), but it rises nearly 500 meters (1500 feet), making it steep and challenging. The dangerous part comes near the end when fatigued hikers must cross a narrow spine of rock and across exposed ledges to the landing. The view from the landing, though, is definitely worth it. Then, hikers have to return the way they came.

It’s one of the most beautiful hikes I’ve ever done (it about ties with Fisher’s Peak).

The hike takes most people around 3 – 6 hours round trip.

Our Hike to Angel’s Landing

My girlfriend Emilie and I visited Zion with our friend Danielle from Canada who had grabbed a cheap flight to the USA.

Personal vehicles are prohibited in most of Zion National Park, so we took the shuttle bus from the campsite to the sixth bus stop, the Grotto Trailhead, where we zipped into the Zion Lodge to grab a quick cup of coffee to jump start our hike.

Almost immediately we crossed the Virgin River, which had turned the colour of chocolate milk because rain further up the canyon had washed large amounts of Zion’s famous orange dirt into the river.

The Climb to Scout’s Landing

The West Rim Trail slowly climbed across a low-lying plain toward the canyon walls. After about thirty or forty minutes of walking the trail turned into switchbacks that climbed steeply toward Refrigerator Canyon. Huffing and puffing, we took several short breaks during the climb.

In the canyon we came to Walter’s Wiggles, a set of narrow switchbacks carved into an incredibly steep face of rock and held in place by retaining walls. As we rested at one of the switchbacks we heard a loud rumble.

It was falling rocks.

We couldn’t see the rocks, but the rumble was as loud as if they were on top of us because the narrow canyon contained the sound. Danielle was very scared. She’d been convinced they were falling right on us.

We waited a moment to calm our nerves before we continued.

When we got to the top of Walter’s Wiggles we were all winded, so we stopped for a minute to rest. There were several groups of people standing around just up ahead of us. We had arrived at Scout’s Landing. 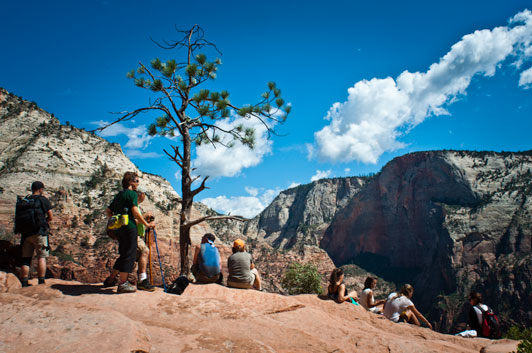 The First HIker Bites the Dust

“I’m going to wait here.” Said Danielle. Danielle isn’t a fan of heights at the best of times. After being startled by the rock fall, she definitely wasn’t interested in navigating the narrow precipitous trail to Angel’s Landing.

Danielle wasn’t the only person who felt that way. Scout’s Landing was filled with people waiting for friends who had continued on.

Emilie and I left Danielle and continued down the trail. We crossed section of narrow exposed trail hundreds of feet high. The only security was a chain bolted into the cliffside to hold.

At the other side we came to a large plateau. The view was incredible, so we stopped to take a photo. It was the photo at the beginning of this post.

And Then There Was One

Then Emilie looked at the rest of the trail to Angel’s Landing and informed that she would not be joining me. I could see why. 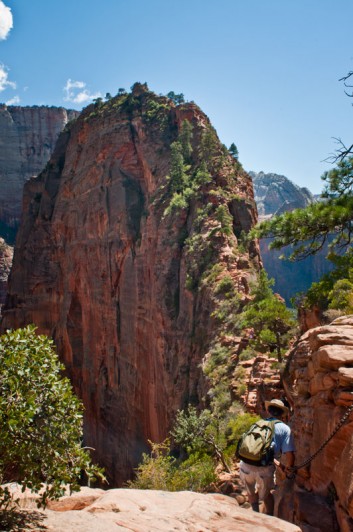 I went on alone. I didn’t blame Emilie for turning back. The trail looked had very precarious. The truth was, though, that the most exposed section of trail was the one that we had already crossed to get to the plateau. Although the trail looked sketchy from a distance, there was only one more short section that was exposed.

Finally, I arrived at Angel’s Landing. It was a long tongue of bare rock. About halfway across it was a wind-gnarled tree. And at the end, was this view.

Check out my photoessay of Angel’s Landing

9 thoughts on “Hiking to Angel’s Landing”