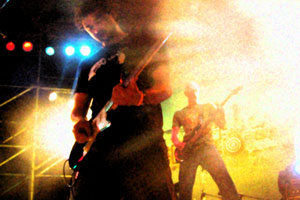 The live music scene in Taiwan consists chiefly of small, local performers playing the songs of popular artists. When an artist plays somebody else’s song they’re said to be ‘covering’ the song, or playing a ‘cover’ song. Most song covering takes place in KTV’s. This author was unable to find any statistics on the matter but estimates that in Taiwan there is one KTV for every 2 people and that KTV’s account for 98.3% of all live music.

Most pubs featuring live professional musicians in Taiwan are ‘dian ge’ pubs. ‘Dian ge’ bars employ musicians full-time to play all the latest hits at the request of customers. Though not as numerous as KTVs, these pubs are also popular venues among Taiwanese patrons.

‘Dian ge’ pubs and KTVs make up almost all of the live music in Taiwan. This article discusses neither. This author, not being Taiwanese, nor a fan of Taiwanese popular music, saw little potential for an article about either of these generic venues.

Instead this article examines the miniscule, fledgling corner of the music scene struggling to steal fans and recognition away from the KTVs and ‘dian ge’ pubs—the original live music scene.

Agony and Ecstasy
Since the majority of Taiwanese people, as Taiwanese guitarist Jeff states, “really like familiar tunes,” original bands in South Taiwan are faced with a disheartening arsenal of adversity. Lack of fans, low pay, few venues, and shoddy equipment are all washouts on the road to professional musicianship.

In southern Taiwan only a few established local acts manage to find enough gigs to keep them playing regularly. There is so little work for original bands that when asked if it was easy for his band to get gigs, Axel Schunn, frontman for Tainan’s longest running local act Charlie Swiggs, replied, “No. It’s hard.”

Then, when a band finally finds some work, the sound equipment provided is often less than ideal. As Peter, guitarist and vocalist for Unfinished aptly states, “You get used to it. But, then again, you can get used to anything.”

Performing in South Taiwan is also a less than lucrative profession. Most band members are forced work regular jobs in addition to practicing and playing. “You wouldn’t want to try and make a living doing it,” says local trio Unfinished, “but it pays for strings and cds.”

Of course, playing in a band isn’t all bad. Unfinished, who play at local historical sites, like the Anping Fort and Confucius Temple, find “it’s nice to play outdoors and in historical settings,” compared to the smoky lounges indicative of their native countries Australia and Britain.

They also find local audience members receptive to new music. “People here listen to music in a foreign language with an open mind,” they say. Jeff, a Taiwanese guitarist specializing in European fingerpicking, even goes so far as to say, “any place you play they love it.”

Then, of course, there are the unprintable stories related to free drinks, late nights, and drunken, star-struck groupies to which this author was shamelessly subjected by his rock n’ roller interviewees.

Festivals
Original music, even in this cover crazy country, finds its way into the limelight once in a while. In southern Taiwan this happens three times every year. These brief periods when the music scene is mystically flipped on its head are known as music festivals.

Festivals are an opportunity for all those musicians stuck playing in house parties and parks, those scrounging for gigs, and that fortunate handful who actually get the gigs, to get together and have one big concert, usually several days long, in celebration of their craft.

Festivals, in southern Taiwan, are benevolent events fueled not by money, but by love of music. These festivals are usually organized by musicians who seek only to promote an original, live music scene and bands almost always play for free.

Conceived and organized by Axel Schunn, Tainan’s annual festival May Jam will be held the weekend of April 30-May 1st in Anping. Information on May Jam can be found at http://www2.eecs.stut.edu.tw/~charlie

Kaohsiung’s version of May Jam, The Kaohsiung Peace and Love Festival, is another big attraction for south Taiwan music enthusiasts. Unfortunately no information on the festival was available at the time of writing.

The biggest of the trio is Kenting’s Spring Scream, which will be held this year April 1st through 5th and usually boasts many of the biggest bands from across Taiwan. For more info visit www.springscream.com

The Music Man
Every time this author writes an article about music in southern Taiwan one name invariably appears—Axel Schunn. The music scene in Tainan, small as it is, owes a great deal to this man. Axel single handedly organizes, funds, and promotes Tainan’s only music festival, the May Jam. Twice a week he hosts the eclectic rock program Noting Creativity on Shining Radio. And he’s the singer/guitarist for Charlie Swiggs, one of Tainan’s most prolific and longest running original acts, which has paved the way for Western music in southern Taiwan with their wacky brand of trilingual (English, German, and Chinese) rock and relentless performance schedule.

Axel also does one other thing. He runs a buxiban. Why, you may ask, would this author mention such a tuneless endeavor in an article about music? Because the buxiban is where Axel makes his money. As I mentioned before playing in a band offers few material rewards. Axel’s radio program is a volunteer effort. And the May Jam is purely a product of Axel’s blood, sweat, tears, and hard earned money. The May Jam, which Axel benevolently organizes, has, in years past, actually cost him money.

Axel is a man a passion for music and a mission in Tainan. He works relentlessly to bring music to the people of Tainan and build what will one day become a Tainan music scene.

In an interview squeezed in between a two-hour show at ESLite bookstore (one out of a hectic three show/two day schedule) and a family obligation, Axel told this author, “I organize May Jam hoping that one day that music culture will take hold in Tainan.” Recognizing the difficulty of the task, he humbly added, “ I may not live to see it though.”