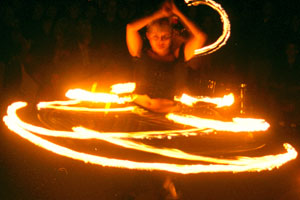 Eight hundred years ago a mammoth bird called the Moa roamed the island of New Zealand. The Moa (cousin to the ostrich) could stretch up to 3.5 meters tall and weighed more than a small cow. They were slow, stupid, and tasty and thus rapidly hunted to extinction by the Polynesians (now known as Maori) who settled the island in the 13th century.

The Moa inspired the art form that brings a group of Tainan’s foreigners to a park just off of Renhe Rd. every Wednesday night to pummel hand drums and hurl flaming balls of cloth around their bodies at high velocities.

The Maori pillaged the nests of the Moa for their football-sized eggs and carried the eggs in flax bags called kii. Once the Moa were extinct the bags became useless, so Maori warriors used them to train by putting large stones in them and swinging them around their bodies. This evolved into a dance done by spinning balls attached to the ends of ropes called ‘poi’.

Eventually some brave soul decided to ignite their poi and fire dancing was born. Now tribal looking dancers across the world light up everything they can think of; staffs, hula-hoops, ropes, and gloves, and fling them around their bodies in the night to the beat of primitive drums.

The group meets Wednesday nights (weather permitting) in a park on Tainan’s East side at10 pm and dances into the early morning. For more information contact davisshauna@yahoo.ca