You are here: Home > Blog > The Taiwan Angels’ Tour for Toys: A Lesson in Perspectives of Poverty
By Matt on August 18, 2008 in Blog 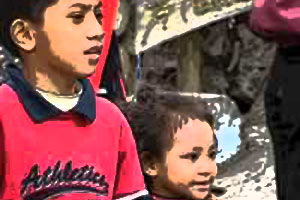 “Some of these kids are really poor,” Robert told me. “Some don’t even have shoes. If you see it you might cry.”

I was in the Cosby Saloon in Tainan talking to the owner, Robert Lo. He stood behind the bar with his back straight and his chin up. His black shirt was tucked tightly into his jeans beneath a prominent belt buckle.

Robert is an unlikely philanthropist. During the day he rides around on a maroon Harley with skulls airbrushed on the sides. He spends his nights with a bottle of Jack Daniels, a couple packs of cigarettes, and whoever happens to be in his saloon.

The first time I met him was to sell him an ad for his saloon in Xpat Magazine. With the same gruff demeanor that he used to command his underlings in the Taiwanese military, he ordered me to give him a half-page. He made it clear that he only wanted to support the magazine. He’s never cancelled it.

On a subsequent visit, over shots of JD chased with green tea, he told me that every year he volunteers as a lifeguard at the Lantern Festival in Anping Harbor in Tainan. So I wasn’t too surprised when he later told me that his bike club, the Taiwan Angels, goes on charitable tours to mountain villages every year to deliver toys, clothing and medical supplies to poor aboriginal children and that he, the unofficial leader of the club, organizes the tour and pays for most of it with the profits from his saloon.

He told me about the difficulties these villages endure. “It’s hard to get supplies because of washouts on the road. You’ll see many young children and very old people. There’s no work in the villages, so the parents go to the city and leave the children with their grandparents.” He suggested that I come on the next tour and I agreed.

My friend Pawl, a photographer, and his fiancée Anetka agreed to go with me. We wanted to ride our motorcycles, but later Robert told me that he’d arranged transportation for us. We met at the Cosby Saloon at 6am on Sunday morning. We were disappointed to find, not to a fleet of Harley’s, but a lone van filled with supplies and a driver.

It wasn’t until we’d driven two hours and passed the town of Sandimen that we met up with the Angels. There were nearly one hundred. Not all were riding Harleys. Many were from another bike club whose members mostly rode crotch rockets, and there were a few cars as well. Robert led the tour on his maroon Harley. You could clearly see the back of his Taiwan Angel’s t-shirt, which read in large white letters “If you can read this, the bitch fell off”.

Paul, Anetka and I reveled in the fresh early morning mountain air and snapped pictures of the bikers from the windows of the van. We wound upwards on mountain roads that became increasingly dangerous. Slides scarred the hillside and in several places the road had obviously been recently submerged in mud and debris.

We arrived at the first, and furthest, of our three scheduled village stops invigorated and enthusiastic. We unloaded the gifts from the van in an empty storefront and waited for the swarm of children.

Twenty minutes later we were still waiting. “Where are they?” I asked Robert.

“They’re in church. Their angels are here, but they’re in church praying to god.” He said with obvious disapproval. After 40 minutes a group of about a dozen children and a few parents showed up. We snapped a flurry of pictures. The children were saddled with oversized bags of gifts and we prepared to leave. Already behind schedule, there was no time to wait for the other kids.

We moved quickly to the next village located at the bottom of a steep hill with several switchbacks. We arrived before the bikers, so Pawl and I rushed up the hill to snap dramatic pictures of the bikers as they rounded the final sharp corner. After everyone had arrived, we rushed down to the town square to see what was happening.

More villagers came out this time, but few were children. Most of the attendees were quite old. There were a few young children, and a couple that appeared to be high school age. The older folks looked through the clothes curiously. The children wore new winter coats and sneakers. One of the older boys listened to his iPod as he sifted through the goods we’d brought.

Robert had told me before, “You can’t take used things. You have to give them new jackets and shoes or else they won’t accept them.” I began to see why. If the goods weren’t brand new and somewhat stylish, the children wouldn’t accept them because they wouldn’t be as nice as those they already owned.

After discussing the trip, Paul, Anetka and I concluded that, although the day had been an enjoyable escape from the city, and a fulfilling charitable endeavor, something had seemed slightly askew. After seeing impoverished people living on less than one American dollar per day in Cambodia and the Philippines (where we’d all recently traveled), the lives of the impoverished Taiwanese villagers seemed surprisingly comfortable.

I wondered why the children and parents weren’t more enthusiastic about the Angels’ visit. After some thought, I realized that poverty in Taiwan simply isn’t as bad as in most other countries. Although the government of Taiwan offers very little in the way of social assistance to the poor, the family support system and general goodwill of the Taiwanese people have created a social safety net that equals, and in many cases surpasses, the government-funded welfare programs of other modern countries.

Indeed, after doing a bit of research I found that only 0.9 percent of Taiwanese people live below the poverty line—the lowest poverty rate of the 130 countries listed. Comparatively, 15.9% of Canadians and 40% of Filipinos live in poverty.

Many foreigners criticize the rigid tradition of family loyalty in Taiwan because it often infringes on people’s personal desires—but it’s that same duty to family that saves innumerable Taiwanese people from begging and living on the streets. Families here go to great extremes to help their troubled brethren.

And we mustn’t forget the goodwill of the average Taiwanese person. In Taiwan it seems that volunteering for a non-profit organization the norm. Most of the Taiwanese people I know participate in some form of charity. Hell, charity is so common here that even the biker gangs pitch in. It’s the generosity of the people—people like Robert Lo and groups like his Taiwan Angels—that keep poverty in this country at bay.

From the Desk 07.06
The Top Twenty Bizarre English Names in Taiwan

3 Responses to The Taiwan Angels’ Tour for Toys: A Lesson in Perspectives of Poverty