You are here: Home > Blog > The Top Twenty Bizarre English Names in Taiwan 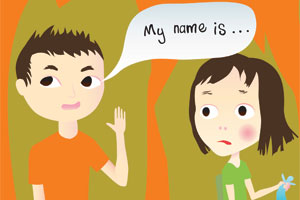 At least once in their career, most English teachers in Taiwan stand in the unique position of naming children, or encountering a Taiwanese person, young or old, with a desire to assume an inappropriate English name. Sometimes kindie teachers, spurred by lack of sleep and unmetabolized alcohol, give kids wacky names for their own amusement, but more often Taiwanese people choose these names themselves and are unwilling to give them up despite the protest of their conscientious foreign educators and friends. Either way, Taiwan is a cornucopia of strange, incongruous, and hilarious names. I scoured various Internet bulletin boards in search of the most ingenious, insulting and comical English names that local xpats have come across. Here are the best that I found.

20) Cash
The funny thing about this name isn’t that some Taiwanese kid heard it in a movie and picked it for a name—it’s that I can actually punch the name into Google and find two dozen inept hip-hop artists who chose this name on purpose without realizing how ridiculous it sounds.

19) Pizza
Well, at least it’s better than Hamburger, or worse—McDonalds (which I was very glad not to have found).

18) Zigga
This kid was named after a DJ scratch sound. Now, no matter how dorky he may be, this kid can go anywhere English is spoken and be cool. He could walk through East LA in horn-rimmed glasses and an argyle sweater, and all the Latinos would drive by and yell, “yo, wassup Zigga,” and offer him a ride.

17) Snatch (female)
The guy who posted this one wrote that when his friend, this elementary schoolgirl’s teacher, suggested that she change it she replied, “No, I like Snatch.”

16) Easy (female)
The poster of this name said that the girl chose it because you have to smile in order to say it. I hate to tell you this sweetie, but that’s not why he’s smiling.

15) Facial (female)
I don’t think I need to comment on this one.

14) Titty (female)
My god, how many sexually suggestive female names are there out there? I swear this is the last one.

12) Zeus
Sometimes kids have the balls to do things that we all really want to do, like stick their hands down their pants in public, pick their noses and wipe it on their pants, or choose to be named after the god of the gods. Well done.

11) Turbo
The poster of this one wrote that if you ask this guy why he named himself Turbo, he’ll stand up, do a James Brown hip thrust and proclaim, “because I’m turbo charged!” I have nothing but respect and admiration for this man.

10) Peter Pan
The poster claimed that this guy was actually a pilot for Singapore Airlines. Unbelievable.

8) Urine (male)
Why would you do this? There’s no explanation, not even that you don’t speak English.

7) Panda
It’s not such a great name in English, but I have this friend whose English name phonetically translates to “tricky panda” in Chinese. When he told me I was so jealous it made me sick. Mine means “lucky forest” or something stupid like that.

6) Booger
The poster said he asked the kid why he chose it and the kid replied that it was because he liked the game Boogerman, and because “it sounded dangerous”.

5) Iron
Apparently this is the name of a personal trainer at California Fitness. He must speak English and must have known exactly what he was doing. He’s the Taiwanese equivalent of those moronic hip-hop artists who name themselves ‘Cash-something’.

2) Flagellum
This word refers to the tail that sperm use to swim up the vaginal canal. What is this person trying to say?

*Special thanks to Forumosa.com, the discussion threads of which supplied the vast majority of these names.

All the weird names that one Kindergarten teacher claims to have given to students:

Every week we hand-pick the best deals from around the web and deliver you up to 80% off your favorite brands like Patagonia, North Face, and Arc'teryx
Tweet
Pin
Share15
15 Shares

14 thoughts on “The Top Twenty Bizarre English Names in Taiwan”