You are here: Home > Blog > My 4 Favorite Canadian Adventures (So Far)

I was asked by Expedia Canada to share my favorite Canadian adventures, but all content and views expressed are 100% my own.

Because of my work, I have a lot of online friends — people I’ve only spoken to through chat and email and other written communications. They all know I’m Canadian. I’m fairly well-known online as one of those Canadian travel bloggers.

But when first meet people and start to talk eyes widen and jaws go slack. “You really are Canadian.” They’ll say after I let fly a monologue filled with ‘eh’s and ‘oh yeah’s.

Since I’m so well-known as a being a Canadian blogger, I think it’s about time I paid tribute to the Great White North as a travel destination. So, here are my favorite adventures from the land that of flannel, Tim Hortons, and John Candy.

My favorite so far, that is…

The Maligne Canyon is one of those rare geographic oddities that allows you to see nature at work in bizarre and spectacular ways that you’d never before conceived of, like Antelope Canyon in Utah or the Doorway to Hell in Turkmenistan.

Maligne Canyon sits on the seam between two tectonic plates. It’s very narrow, about 5-10 meters (15-30 feet) wide with sheer walls rising up to 45 meters (150 feet). During the summer the canyon filled with water. But in the winter, when everything is frozen, the river drops below ground, enabling visitors to walk along the canyon floor.

This is where the fun begins. Water constantly seeps into the sides of canyon through cracks and caves, so the canyon walls become covered in otherworldly ice formations from waterfalls, to inverted droplets, to long horizontal bars. There are several ice caves along the walk, including one enormous one at the end beneath a tall waterfall that’s popular with local ice climbers.

This is by far one of the most geographically interesting and visually mesmerizing hikes I’ve ever been on. I highly recommend it.

For more photos of the Maligne Canyon Icewalk and other winter adventures in Jasper, check out my post: #MyJasper: Adventurers Only

The Manigotagan is a long river that meanders through the wilderness of Manitoba. Several years ago, I was fortunate to have been invited on a week long canoe trip on the river.

On my arrival, I learned many things. First, I learned that there is an entire culture of paddlers who spent much of their leisure time canoe tripping around the rivers and lakes of the Canadian Shield.

I also learned canoeing is supremely hard. The paddling part is relatively easy, but when rapids make the river impassable, and you have to carry all your gear and the canoes through kilometers of bush over rocky terrain (this is called portaging), it becomes grueling.

I also learned that Manitoba mosquitoes swarm into the air the moment the sun dips beyond the horizon, which makes sunset the official bedtime. From these lessons, I concluded that paddlers — who save money and sick days all year long to blow them on these tiring, mosquito-clouded trips — are slightly insane.

I also learned that you can cook cinnamon buns using camping gear and that Manitoba has some of the most beautiful and desolate landscapes in Canada. You can see more photos of that trip here. 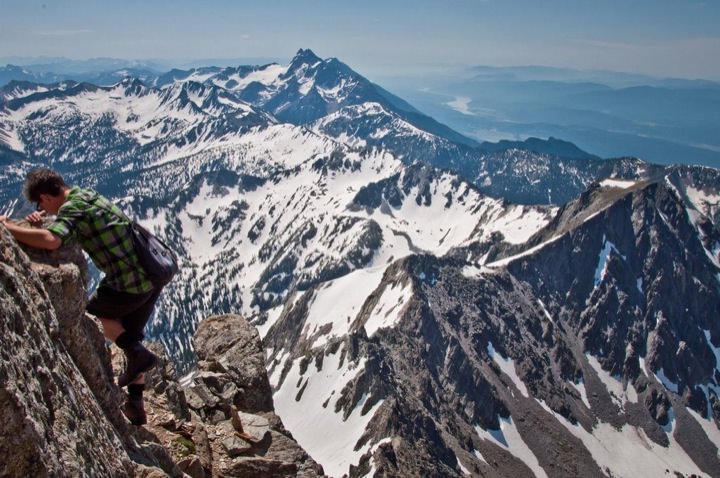 My hometown of Cranbrook, British Columbia sits in the valley between the Rocky Mountains and and a mountain range called the Purcells. The rockies tower over the western landscape, but among them one peak rises significantly above the others: Fishers Peak. The hike ubiquitously known in the region as one of the most challenging and rewarding.

I didn’t try the hike until I was 33-years-old. It lived up to the stories. It was a grueling steep hike, climbing 1400 meters over just 10 kilometers of trail. By the end of the 12-hour round-trip everyone’s legs were sore and tired.

But it was more than worth it. The peak offers an unobstructed view of the surrounding mountains that seem to continue endlessly into the distance for 360 degrees.

See all the pictures from that trip here.

If you read my blog you know that I love snowboarding a lot.

That’s because I grew up on the ski hill. I had a season’s pass every winter from the time I was 3 until I was 18-years-old. Now, I’m the author of the About.com Snowboarding Guide and every winter I put my travels on hold and return to Canada to do ‘research’.

I’ve ridden in Montana, Washington, California, Colorado, and Utah. They’re all spectacular places, but I’ll always have a special reverence for the wild Canadian Rockies which have an expansiveness that creates — for me at least — a more personal and spiritual feeling.

Whether hiking the local hill in the preseason with my brother, drinking beer and ripping spring turns with friends at Lake Louise, or exploring the remote backcountry of Jasper National Park, the Canadian Rockies will always be my favorite playground.

For more of my best skiing and snowboarding photos from over the years, check out this page.

3 thoughts on “My 4 Favorite Canadian Adventures (So Far)”