Note: This is a heavily reworked version of an article that originally appeared in Highway 11 Magazine. Don’t miss the photo gallery from the farm at the bottom of this page! 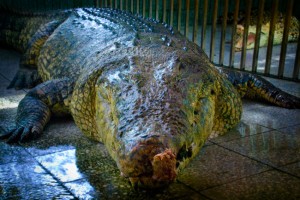 I tipped back my cowboy hat, which I had brought to wave in the air while riding the crocodile, and sized up the dinosaur-like behemoth. His head looked like that of a crocodile, but his body looked more like it belonged to giant mutant toad.  His belly spread out on the pavement beneath him like a green leather sack of water.

“Are you ready?” I asked my girlfriend.

“It looks pretty safe.  I don’t think he can move.”

I pointed at the crocodile and asked the owner, Chiu ‘the Crocodile King’ Hsi-ho, “Ke yi zuo ma? (Can I sit on it?)?”

He nodded.  I took a deep breath and started to walk towards it.

We were in the Crocodile King Animal Farm, a small zoo of exotic and mutant animals in a small town called Madou in rural southern Taiwan.

The crocodile that I was about to mount had been imported from Thailand two-and-a-half years earlier.  Since then he had lived on the farm in a children’s wading pool that was only about one meter longer than his body in either direction. His life consisted of eating, sleeping, and being sat on by Taiwanese locals so that they could pose for novelty photographs. He had gained 500 kg since arriving at the zoo and he was now so fat that he looked like he couldn’t even walk.

He was, in fact, so fat that he may have been a record breaker. Later I did some research into famous large crocodiles. The heaviest crocodile I was able to find an official record of was Yai, a 6m, 1114kg, Thai croc. I also learned that some extremely large wild crocodiles could possibly weigh over 1300kg, but that crocodiles of that size would normally be over 6m long.  So, if the crocodile in the Crocodile King Animal Farm was, as the sign on the wall claimed, 1250 kg and only 5.2 m long, it’s very likely that he was the fattest crocodile in the world.  He sure as hell looked like he was.

As a person who likes animals and…uh, you know, freedom and stuff, I was disturbed by the croc’s cramped living space. But thinking about it later, I realized that I have lots of friends in North America who live in mobile homes with abnormally large televisions that have made it their life’s goal to eat as much and move as little as possible.  So, as much as I hated the idea of the croc being forced into this lifestyle, it seemed possible that the he may not have minded the arrangement.  If they laid him across a paisley couch in front of a TV and stuck a Marlboro in his mouth, he would have somewhat resembled my friend’s unemployed uncle who bought beer for us in high school.

Christine and I took pictures of each other sitting on the über-obese amphibian and I waved my cowboy hat in the air.  Afterwards we felt ashamed. But that wasn’t the worst of it. Our day really took a nosedive a few minutes later when Chiu gave us an extra show.  There was a smaller female crocodile living in the adjoining pen.  Chiu shook and kicked her until she defecated in fear.  Then he scooped up the feces with a large metal pan and fed it to the giant croc.  After the croc finished eating, Chiu turned around shot us a game show host smile and an enthusiastic thumbs up.

“Xie xie (thank you).” We stuttered and walked away, dumfounded.

The Crocodile King Farm is a walled compound on about three-quarters of an acre.  The middle is occupied by large pond smothered in lily pads and encircled by a trail lined with animal cages and pens.

We followed the trail around the pond.  We saw a lama and a miniature pony in a fenced-in area the size of a small studio apartment.  In another small pen was a group of Formosan deer. In a separate cage, with barely enough room to turn around, lived an albino deer. One aquarium contained a cute-as-a-button little two-headed turtle. There were several varieties of exotic birds including an ostrich, an emu, a cassowary, and an oddly large number of featherless mutant chickens, all living in areas too small to afford much movement. The most incredible birds, however, were the mutant ducks, which had clumps of feet growing out of their butts like bouquets of webbed yellow flowers. They were super cute.

On the final leg of our tour we encountered the most disturbing of the mutants: the mutant goats. The two of them lived in separate pens. One was a three-legged cripple with horns growing out its front left foot. The other had a bone-like protrusion the size of a wine bottle growing from the center of its chest. While we stood there the three-legged goat jumped up on its hind legs and got its horned foot stuck high between the bars of the cage.

As I watched the goat wrestle with its entangled deformity I wondered about its life prospects beyond the freak farm.  The goats had probably come from normal Taiwanese farms. Had they stayed on those farms they’d probably have been killed to prevent them from passing on their abnormalities to their offspring. Perhaps the Crocodile King Farm had saved the goats from prejudicial slaughter.  Perhaps it had also saved the featherless chickens and foot-butted ducks.  It was a comforting idea.

Opposite the goats was a door to a hall lined with windows looking in on various exotic reptiles and snakes.  Each cage occupied about the same area as two single mattresses laid end to end.  Some of those cages contained single crocodiles. Some contained several lying a heap.  The latter looked kind of like the pictures they showed us in high school of the mass graves at Auschwitz—haphazard mounds of flesh. After seeing that we left.

I offer the following explanation.

If we want to live in a world where people understand and respect nature, it’s necessary to have places where people can experience nature’s infinite variety.  Pictures and words simply cannot replace the psychological connection that occurs between two conscious beings that occupy the same space at the same time.

The problem is that, as a business, the Crocodile King Farm’s ability to provide quality accommodations to animals is limited.  If customers demanded to see larger, cleaner pens, management would have to comply. But they would also have to raise their prices. Would the farm’s patrons, mostly residents of rural Taiwan, be willing to pay, say, double the current price ($6.50USD per adult) to ensure the humane treatment of the animals?  Sadly, they probably wouldn’t.

Unfortunately, ideas about the ethical treatment of animals in Asia are very different from those in the West.  Taiwan’s government is aware of the Crocodile King Animal Farm and it does nothing.  The same can be said of local Animal Rights NGOs. That’s a situation one can do little to change.  But, if I had my way, the government would subsidize and farm so that conditions could be improved and fair treatment of the animals could be ensured.  That way the farm could continue to educate people about the strange and fascinating creatures that inhabit our world, and, hopefully, offer those animals a place they can live happily.

Although my trip to the Crocodile King Animal Farm wasn’t exactly what you would call fun, it was educational.  I learned about nature’s limits, or, more specifically, her lack thereof. That night lying in bed, as I thought of those animals in their tiny cages, I imagined my favorite of them roaming free.  He was in a swamp. He plodded awkwardly along the shore and slid into the water. In the water he moved quickly and gracefully.  He plunged downwards looking for food and zoomed into the depths. I had first thought him to be a freak, but now I saw him for what he really was: the product of millions of years of natures genetic tinkering—a natural being existing among all of the other haphazardly created genetic lottery winners. Then he returned to the surface, popped out of the water, and sat there majestically, bobbing up and down, the water streaming off his snowy white feathers. He’s a pinnacle of evolution in his own way, that cute little butt-footed duck.